Washington Post- Ultra-Orthodox Jews protesting the military draft is nothing new in Israel, but a young woman using karate chops and kung-fu kicks to push back a crowd of angry young men might just be a first.

The video of Golan fending off a group of men as they cursed at her, calling her a “shiksa” (a non-Jewish woman) and a whore and spitting at her, has caught the attention of both secular and ultra-Orthodox or Haredi media in Israel.

“They attacked me, so as a soldier, a civilian, an old woman, young or no matter what role I or what I was wearing, I defended myself as I would in any other situation,” she said, according to the Facebook page First Report.

Tell ya what–Nomi Golan can play for my team any day of the week. I don’t portend to have Octagon Bob’s knowledge of MMA, but those sweeping roundhouse kicks looked absolutely vicious. It’s no wonder the angry mob of ultra-orthodox Jewish men was afraid to take it to the ground. Their standup game leaves a lot to be desired; personally, I think spitting dry loogies from a distance is cowardly, but I’m not an ultra-orthodox Jew. Not even close.

I do love this woman though. I love that Israel conscripts all citizens to join the army at 18, men and women alike. I’ve heard that birthright–the program that pays for Jewish people from around the world to visit Israel–is essentially J-date come to life (J-date is a dating app for Jewish people). When you go on birthright, you’re escorted around the country by male and female soldiers, many of whom are young and beautiful. At night, you party with them, and things can move fast from there. More than a few visitors have lingered in Israel long after the sun has set in order to test the warm, salty waters of the Dead Sea with a new companion. In a desperate effort to involve myself in this old-world matchmaking, I’ve enlisted the powers of ancestry.com to find even a shred of Judaism in my lineage. Sadly, I’m as gentile as pulled pork.

I may have to find my knightess in shining armor by other means. But mark my words: a lady soldier from Isreal will one day my wife make. Like that chick from World War Z whose arm Brad Pitt amputates to stop her from turning into a zombie. That would be so badass. Knowing that the lady on my arm is far more capable of stopping a mugging than I am? Let’s say we’re at a Christmas party (doubtful, because I would clearly convert to appease her parents) and some asshole starts mouthing off to her? I can stand idly by while she pulls out a standard-issue Israeli army knife and castrates him in front of the punch bowl. Ho hum, my wife just severed that guy’s testicles at a holiday party! Fuck yeah!!

As for Nomi Golan–our whirling dervish of kicks–she’s undeterred, unafraid, and unequivocally awesome. A horde of angry ultra-orthodox men and boys showers her with their dry spittle and she taunts them for their weak sauce. Despite their best efforts to summon a solid hock, Hebrew is a super phlegmy language and they used up all their best loogie juice planning their protest. Look at this shit: 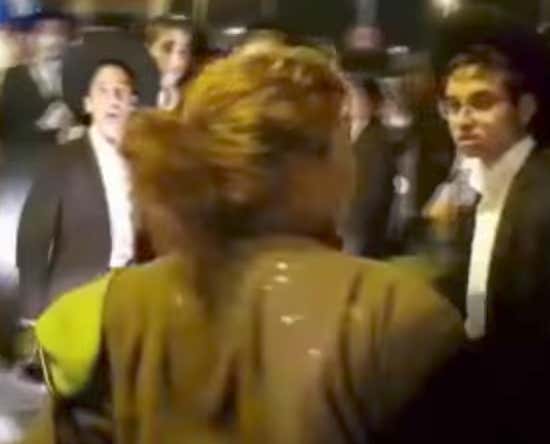 She looks like the aftermath of a blowbang scene. Glistening like a disco ball. Somebody get this soldier a towel! That’s the kind of spit that won’t move the needle at ALL during sex. And yet, at the end of it all, the scoreboard spells a resounding victory for Nomi Golan.

If anyone knows the contact info for an officer in the Israeli Army, preferably one who overseas an all-female regiment, I would be grateful.