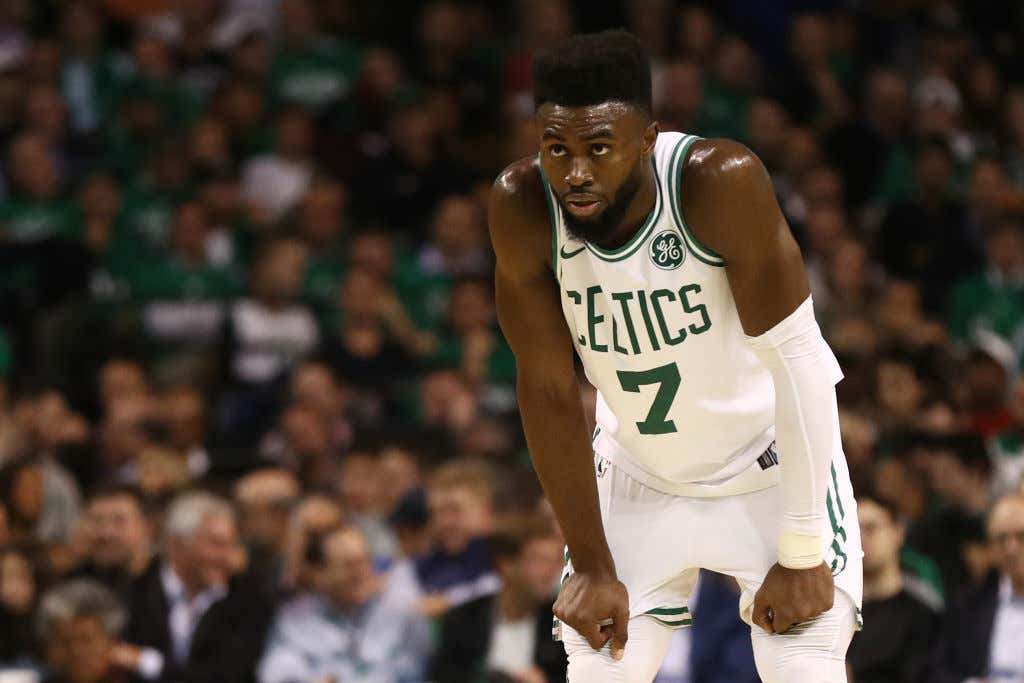 I don’t think I have to give this disclaimer, but this is the internet so let me make myself as clear as possible. It is beyond early in this season. To expect the Celtics to be a welled oiled machine, especially after losing Hayward, at this point in the season is foolish. However, it IS possible to be annoyed with how the Celtics played last night, and still NOT be worried about their future. That’s where I am today.

After that game in CLE, the majority of us Celtics fans all had the same thought, “It sucks, but this team still has more talent than last year, and should still be a top team in the East”. Well then if that’s the case, how can you be OK with the fact that the very next night they can’t close out fucking Delly and the Bucks? That doesn’t annoy you? It annoys me. This team has now blown fourth quarter leads in back to back games, against quality playoff opponents. That’s bad. Remember, these games count now, so again, while it’s EXTREMELY EARLY, that doesn’t absolve the Celtics from playing like shit.

0-2 certainly was not something I saw coming, even after the injury, so let’s talk about it.

– If there’s one thing that made me happy despite losing this game, it’s the continued development of Jaylen Brown. Following up his impressive 25 point performance on Tuesday, Jaylen was back at it again last night with 18/5/3 on 6-11 shooting (2-3 from deep). Enjoy.

This team needs a second scoring option, and it appears that Jaylen is ready to step up and be that consistent option. One of the things Jaylen struggled with last year was there were times when he would be aggressive and attack and look amazing, and then the next night would disappear. I don’t think we’re going to have that problem this year. Once Jaylen learns how to change speeds, he’s going to be a serious problem simply because we have yet to see someone prevent him from getting to where he wants to go. His shooting is much improved, he’s at 50% from the floor so far this season, and I would argue that his offensive development is going to be the most important storyline of this season. Without it, how is this team any different from last year where they just had one reliable offensive weapon?

– No doubt about it, this was very very cool

I’m not crying again YOU’RE crying again. Also, to deal with my anger last night I fired up the old reliable 2K18 and Hayward was unstoppable. Dunking from everywhere, hitting threes,  I may have to make him inactive because all it did was make me even more depressed.

– I don’t really care if it’s just two games in, I am buying ALL off the Terry Rozier III stock. The brightest star on that second unit, he went for 15/7/6/2 on 6-12 shooting (3-5 from deep). What I loved about his night was the variety in which he scored. We had floaters

we had contested threes

The scoring is nice, no one can deny that, but that’s not the only thing that stood out to me about Rozier’s night. How about him having the second highest rebounding% on the team last night at 14.6%. This was higher than ANY starter and Baynes. Say what you want about him as a player, but you can’t deny Rozier is an elite level rebounder for his position.

– The rumors are true, I am a sucker for good ball movement

– For the second consecutive game, against a team that last year also gave them rebounding problems, the Celtics remained close, this time 45-43. Despite their struggles this is probably one of the more surprising things about this young Celtics season. They aren’t getting killed on the boards, they aren’t giving up a million second chance points. I credit the guards if we’re being honest. Smart and Rozier have been amazing on the glass through two games, and I think we can all agree Tatum is rebounding at a much higher level than we all expected. After 10 in the opener, he had 9 more last night.

– Speaking of Tatum, his line is about where I expect him to be all year. The 36 minutes he played were the second highest among starters, and with each opportunity we’re getting more and more glimpses of what’s to come with time. Danny Ainge, you goddamn genius

– I don’t know what Brad Stevens says during these halftime speeches, but the Celts again responded in the 3rd quarter taking a 5 point deficit to a 4 point lead heading into the fourth. Jaylen for the second straight game led the 3rd quarter charge (3-3) but almost everyone played well as they had 50/71% splits in those 12 minutes, while also causing 5 TOs.

– It wouldn’t surprise me if there was some criticism of Al Horford, there always is, but pump the breaks. You can do a whole lot worse than 13/6/4/3/2 in 33 minutes. You want to say he should score more? Well he only took 11 shots. FWIW he was also the only starter with a positive +/-.

– Despite their struggles, the one thing the Celtics are doing well is taking care of the ball. Just 12 TOs as a team last night, that’s pretty impressive considering all the inexperience on the floor.

– Again, allow me to say this one more time. IT IS EARLY, however, all we can do is evaluate this team based on the evidence in front of us. We can project what they might turn into with time, but that’s unknown. What we know now, is the offense is down across the board, and it’s not just the young guys. Here’s what I mean;

Al Horford’s Ortg is down nearly 7 points. Kyrie’s is down nearly 15, Smart same thing, down 13 points. I get the premise that these guys will need to learn how to adapt, but at the same time, Smart had been in this system for years, Horford flourished in it last year, so to say their offensive struggles are surprising I think is fair. Obviously the majority of their sets had Hayward in mind, but the problem is decision making. Shot selection has been poor, players aren’t moving without the ball, and the ball isn’t moving like it should. To me, this really isn’t a chemistry thing, the Celtics have just fallen into the trap of playing lazy basketball and that’s fucking annoying.

– You can’t have a tougher first two games in terms of defending wings than playing Lebron and Giannis back to back. What we learned, is that the Celtics are no different than any other team in the NBA as they could not stop, or even slow down, either. Last night for example, the Celtics waited too long to pick up Giannis in transition, they continue to bite on every pump fake, and while I agree almost no team has success against these two, I don’t really care. If the Celtics want to do anything in the playoffs, chances are they are going to have to deal with at least one of these guys, and as promising as their young wings are, defensively there is still a long way to go.

– The same could be said for guard defense. The Bucks guards completely dominated. Delly had a 121.5 offensive rating, Brogdon had 19 points on 6-10 shooting. So much was made about Isaiah and his defensive liability, which was true, but have things gotten any better? Again if this team is more talented, they should be able to lock down fucking Delly, especially down the stretch. I don’t think that’s too much to ask.

– The trend of last year continues. Give up multiple 30 point quarters, the Celtics will have a tough time winning.

– This was Jaylen’s 6th foul. Shame it’s still hard to get calls at home

– Yabu was a DNP. Makes you wonder what could have been….,

– OK, let’s talk about the elephant in the room. Kyrie was awful. Will there be a lot of these 7-25 performances, I say no. Everyone is entitled to have a bad game, and I think he’ll be fine, but that doesn’t mean he’s above criticism. Last night was the version of Kyrie that scares me, he had 0 assists in the first half, and he forced his offense. Just look at how the Celtics played in the third. They got off to a great start because he played within the offense and made an effort to get others involved. In every other quarter, that wasn’t the case.

Even without fully having chemistry with his teammates, from simply an individual talent standpoint, I expect him to outplay whoever the Bucks have in front of him. He is a star player and with that comes the pressure and responsibility. This team entered the fourth quarter with a four point lead, and it was a time on a back to back that you need your best players to step up. Instead, these were some of his crunch time offensive possessions

Look at everyone just standing around. That’s what makes me so goddamn angry. It wouldn’t surprise me if this is the worst Kyrie plays all year, so big picture it’s no big deal, but again, these are moments you expect players of his caliber to come through in. It was surprising, especially because I thought he was pretty good against CLE, but through two games Kyrie is yet to have an Offensive Rating over 99. That si downright shocking to me.

It’s also surprising that we don’t see some of the same sets we saw Brad run for Isaiah. Both were elite level iso players, but where are the high screen splits? Where is the P&R offense? That’s probably the biggest shock, is I don’t think Brad has used Kyrie right yet so far this season. Too much off the ball last night for my liking, which is why I don’t love the Smart/Kyrie pairing. This is the area I agree with when people say it has to take time. Brad will eventually figure out how to put Kyrie in the best spots to be successful, just like he did with Isaiah, but as we saw last night, whatever THAT plan was, it ain’t it.

– I really don’t want to go back to having to worry about 4th quarters. But when you are up 4 one minute, and then down 7 the next, that’s a collapse. Right on the heels of collapsing against CLE, I don’t know how you can’t at least be a little shook.

Finally with a day to practice, things don’t get much easier with PHI on deck tomorrow. Embiid/Simmons/Covington looked great last night against WSH, and these two teams always play each other close. This is certainly no time to even come close to hitting the panic button, but taking a look on the schedule and seeing MIL/SA/OKC on the horizon, they Celtics don’t exactly have a ton of time to figure things out before they truly get out of hand. 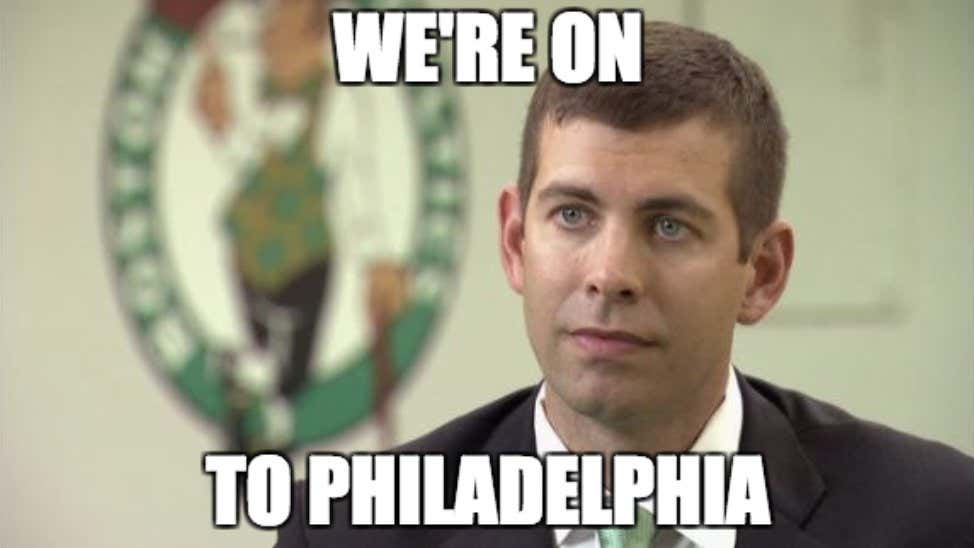