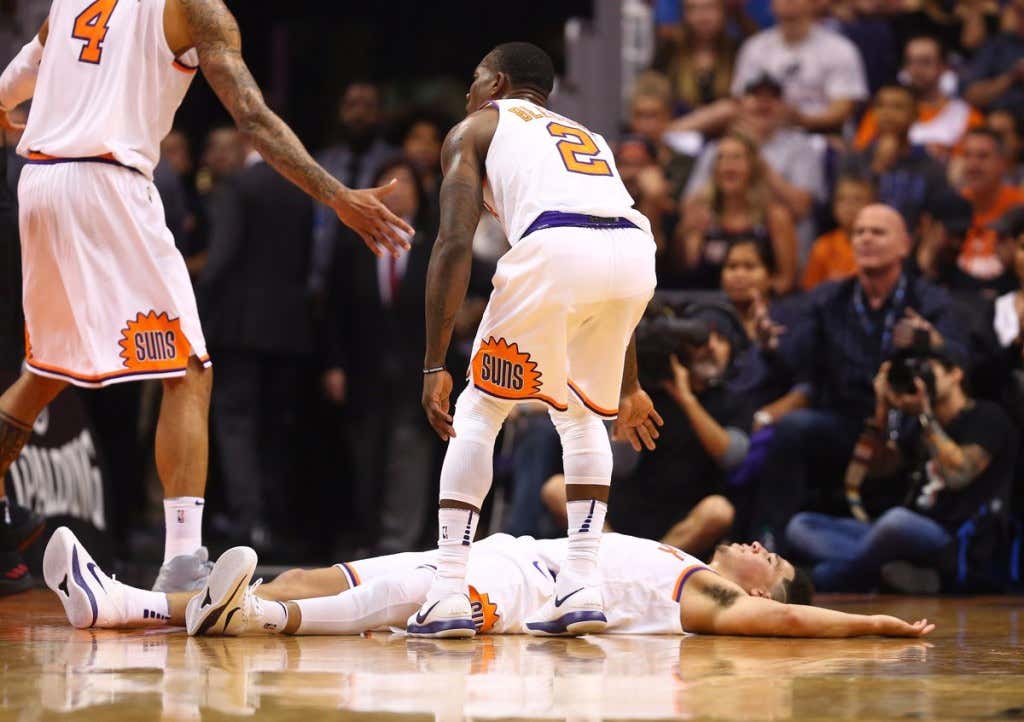 Welcome back to Last Night In The NBA, where we catch you up on everything you may have missed from the night before in the Association. With a full slate of games, 11 in total, there sure were a lot of awesome things that happened on the basketball court last night. Chances are you didn’t catch them all. Fear not, that’s why I’m here. Here’s what happened

One of the more entertaining early games, the Wizards reminded all of us how tough it can be to win a game in DC. A place they went 28-13 last year, things don’t appear to be all that different, no matter how many number 1 picks they face. As you can imagine, it was their expensive backcourt that carried the load, with 53 points combined between Wall and Beal

That Wall dunk was so nasty, it deserves a slow mo look

Despite his age, and his young high ceiling opponent, Marcin Gortat still did his thing with a solid 16/17/3 on 7-12 shooting. It wouldn’t surprise me if they try and shop Gortat at some point, so performances like this certainly help. But the big news for WSH was their bench. It wasn’t terrible! Kelly Oubre had 14 points, and this cool dunk

And Jodie Meeks had 14 as well. The Wizards will have questions though, as Jason Smith played just 7 minutes after injuring his shoulder.

which has to make you feel good if you’re a Philly fan. Also, seeing Embiid attempt this dunk probably gave you a heart attack

He was pretty good too, with 18/13/3 in 27 minutes. It almost isn’t fair what he can do on the basketball court, especially at 7 feet. Like this

But the best player for the Sixers was probably Robert Covington, who was pretty unconscious dropping 29/7 on 9-15 shooting including 7 threes

Please wait for the blog, but here’s a little preview of how things went

It must be nice to finish a game with 42/34% splits and never really worry about losing a game. A wire to wire win for the Pistons, they opened their new arena in style. Tobias Harris went off, 27/10/3 on 11-18 shooting

Could this be the year he finally takes a step as a true number 1? So far it looks like yes. This was also the offical real game debut for Avery Bradley, who to no one’s surprise was pretty much the solid Avery Bradley I’ve watched for the last 6 years. A total of 15 points on 7-10 shooting, I’m not showing any highlights because I do not feel like crying.

It wasn’t all good though. I mean Stanley Johnson did go 0-13, that’s not great. But the Pistons played to their calling card, played tough D, and grinded out their first win.

For the Hornets, I think it’s safe to say with all the injuries they’ve had, it’s going to be a long year. Kemba led the way with 23, Dwight did have 10/15, but overall they really struggled offensively. Frank the Tank and Malik Monk going 2-18 sure doesn’t help either

Holy scoreboard Batman! Who knew two teams that everyone thinks are going to stink real bad could be responsible for scoring like this? Not me. Not you. The Pacers got a pretty balanced attack, With 8 players in double figures, 3 starters with at least 20 points, and 6 players with at least 16 points. They shot 52% from the field, and as you can imagine this made their 14 TOs irrelevant

Myles Turner showed us why there is MIP hype around him, with 21/14/2/4, but how about the Pacers new backcourt! A free Oladipo might be the best Oladipo as he was great too. I think Pacers fans would take 22/5/4/4 on 50% shooting from him any day. Oh and the other PG13 trade piece Sabonis went 7-7 for 16/7. Kevin Pritchard take a victory lap…..through one game!

For the Nets, we obviously start with what is most likely a season ending injury. That fucking sucks and I don’t care who owns their pick. He had played pretty wellup until his injury, but this certainly throws a huge wrench into whatever progress BKN was hoping to make this year. I hpoe it’s not real serious, but the Nets will feel this loss.

His backcourt mate did have 30, so at least there’s that

But some of their other new additions like Mozgov, Crabbe, and Carroll were all pretty meh. Much like CHA, it;’s going to be a long season for the Nets…again.

In the battle for Florida bragging rights, it was the Magic who came out on top. That’s a sentence I did not expect to type, but it’s true. That actually happened. Aside from Gordon’s 4-13 shooting (still had 14/9) all the Magic starters shot the ball pretty well, and they were led by Evan Fournier and his 23 points and plays like this

It was interesting that their three guard lineup (Ross, Fournier, Payton) actually paid off, and something that we probably see more of as the season goes along.

For MIA, I mean Hassan Whiteside went absolute bonkers. 26/22 in 36 minutes, he was the very definition of beast

This was also our first opportunity to check in on the weather on Waiters Island, and as expected, it looks great!

If you were wondering if slow awkward Kelly Olynyk offensive moves still make me laugh, the answer to that young blood is yes, yes they do

Man that opening quarter was so promising for the Pelicans. Too bad they immediately started sucking right after it, and the Grizzlies were the same old grind it out squad that ultimately pulled it out. It was almost as if they didn’t care that Tony Allen was coming back

Mike Conley led the way with 27 points, Gasol did his thing adding 14/11, but the story of this game for MEM was their bench. When 3 of the 5 starters don’t score more than 5 points, it’s important the reserves pick up the slack and that’s exactly what they did. Like the highest scoring debut for a Canadian rookie in Dillon Brooks and his 19 points on 7-13 shooting. I mean look at this fadeaway!!

We also were shown some signs of life from Chandler Parsons, which is certainly a surprise in 2017.

Combined they took 44 of the 79 shots, but that’s because essentially every other Pelican stunk and stunk bad. Time to start the blow it up countdown?

This was a really fun game between two teams that people don’t expect much from. That’s why the NBA rules, two shitty teams can play each other and still produce entertaining basketball. The Hawks were led by Schroder was was solid with 28/7 on 50% shooting, but they also got a decent performance from Belinelli who was a team high +14

I’m also very here for John Collins ROY campaign. 14/5 on 6-10 shooting in 22 minutes, this dude is going to be really really good one day.

For DAL, you could say the same thing about their prized rookie Dennis Smith Jr. He picked right up where he left off in the preseason, doing things that you can’t look away from

Also not a bad opener for Nerlens Noel in a prove it year, he went for 16/11 and didn’t miss a shot.

Sadly though, the Mavs didn’t play defense in the fourth quarter and it cost em.

What a collapse by the Nuggets. a 28-13 fourth quarter blew their lead, but credit the Jazz for getting contributions from several guys and shooting 50% for the game. Gobert had 18/10, Rubio 9/10, Mitchell had 10 for his first NBA game, then bench showed up, just a real complete team effort.

For DEN, you looked so good. You were shooting the ball so well in that first half. You wasted a near triple double from Jokic

and that’s because besides Millsap (19/6) and Will Barton (23/6) nobody else really did anything. In his first chance at being the starting PG, Jamal Murray had just 2 assists and 3 TOs.

Is it unfair to call this a measuring stick game? Probably, but I’m calling it a measuring stick game to remind all the excited MIN fans that you still have a ways to go. The Spurs were their usual methodical selves, led by LMA and his 25/10/4. Crazy what an extension can do to a player’s confidence

The spurs even without Kawhi were still solid defensively, and got nice contributions from Murray (16 points on 7-8 shooting) and Rudy Gay (14 points on 5-9). It was a weird game because no Spur had more than 4 assists which isn’t very Spurs like. Also, who doesn’t love hearing Pop do his thing?

For MIN, despite the loss you have to be at least somewhat encouraged. You hung around with SA, and got a pretty good performance from your new $148M man

and Jamal Crawford still has it!

Phew! Losing by 50 would have been really embarrassing, thank heavens the Suns avoided that fate. As punishment, we won’t look at any of their good plays because I’m not sure there were any.

For POR, with no CJ McCollum due to his suspension, Dame picked up the slack

but it was the breakout performance from Pat Connaughton that was most surprising. His 24 points on 9-14 shooting was fairly impressive

And finally, we have the last game of the night. The Rockets win back to back games on the road, and they can thank their starters for it. Harden, Gordon, and Capela were all great

For the Kings, this game showed why I’m more hopeful than most about their season. WCS had 21/10, Hield had 19, George Hill 16, and rookie De’Aaron showed why he may end up being the best PG from this class.

And that’s everything that happened last night in the NBA. There are just 3 games tonight, but if for whatever reason you miss them, make sure to check back here Friday morning to get brought up to speed