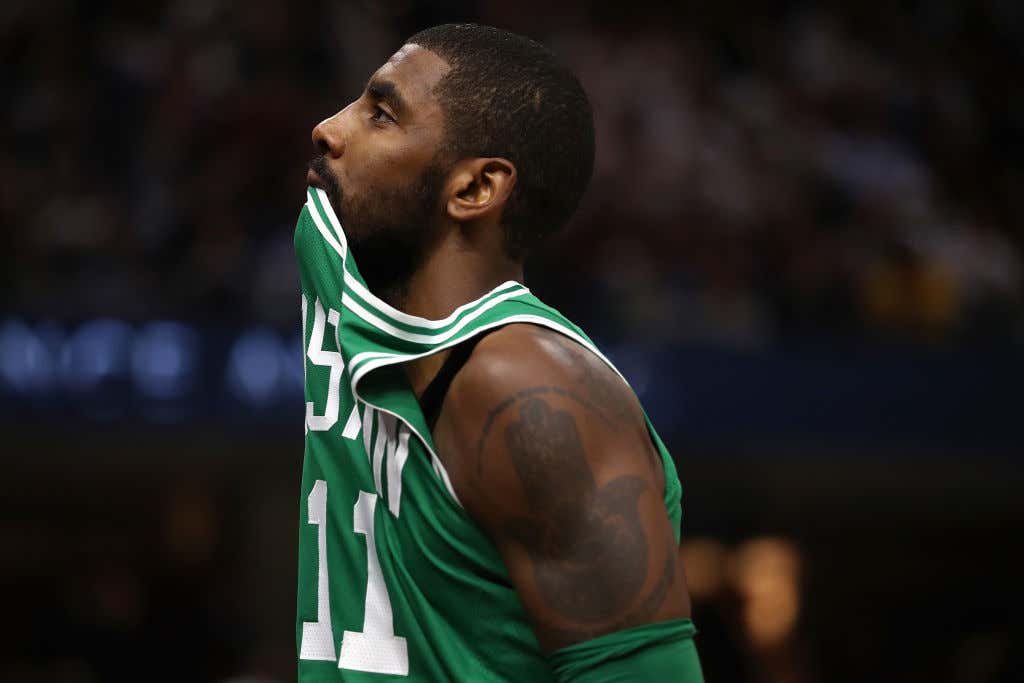 I still can’t believe what happened. I didn’t get a lick of sleep last night, and I’m sure there are many reading this who probably had the same experience. It’s just so devastating. Part of me feels for Gordon Hayward the person, the guy who changed his and his family’s entire life to be a part of the Celtic family, a guy who clearly worked all summer to be in the best shape of his life, is probably freaked the fuck out right now. The disappointment he must feel is something I can’t even imagine, as things changed drastically just 6 minutes into the season. I don’t care what team you root for, or what you think of the Celtics, it’s impossible to not feel for Hayward at a time like this. I know we’re all scrolling Twitter, looking at anyone with an MD in their handle trying to convince ourselves that the shortest timeline we see will be the reality, but if I learned anything being up at like 330am staring at my ceiling, it’s that I have accepted the fact we probably won’t see Hayward play again until Opening Night 2018. That sucks. That really fucking sucks.

The other part of me couldn’t sleep because once again, the Celtics blew a winnable game against CLE. Remember these games count now, so on top of everything else that happened, enduring a heartbreaking loss certainly didn’t help. We have a lot to cover, and while things looked dark, trust me when I say there were some positives to take out of this game.

– It was clear before the season that Jaylen Brown was going to have to take a leap, and now, it’s even more important. The good news is, this was a great first step. We begin today with Jaylen and his 25/6 on 11-23 shooting. Enjoy.

It’s hard to not be impressed with what we saw from the second year player last night. It was clear right away that Jaylen wasn’t afraid of the moment, and I think that’s a great sign. Most of the things we expected, his insane finishing on the break, his corner shooting, all looked solid and really better than I expected this early. Now, having said that, I really could have used one of those threes in the final 2 minutes to drop, but his big second half was a key part of why this team was able to overcome an 18 point deficit. I thought Jaylen was consistently aggressive in attacking the rim and not settling, and that’s exactly how I want him to play.

With Hayward out, performances like this now become even more important, I think we can all agree with that.

– Can you imagine starting for the Boston Celtics as a teenager, and your first professional game is on the road against Lebron James? How would you respond? We’d probably all shit out pants. Jayson Tatum? He went a different route, basically turning into Larry Bird 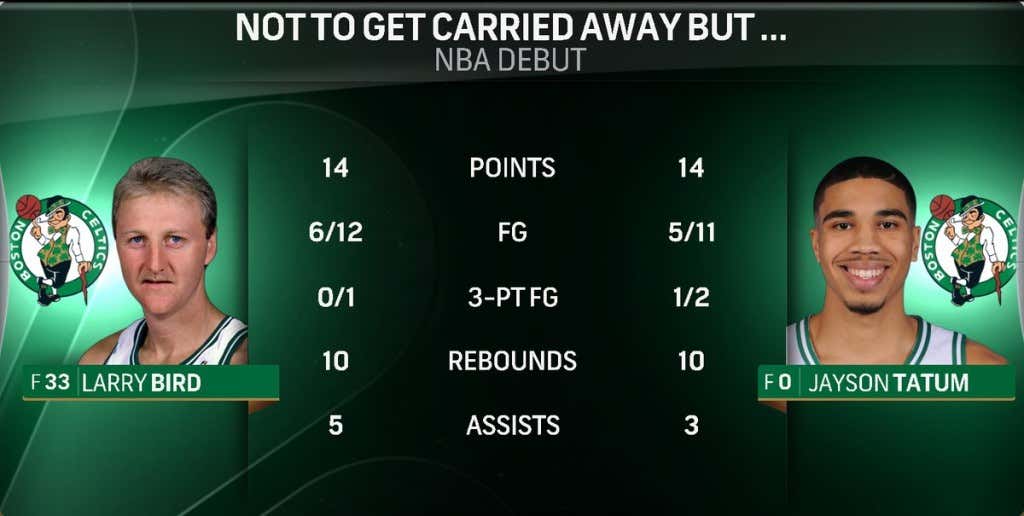 As of right this second, you’re looking at the ROY favorite. After a slow start, which obviously is to be expected, Tatum was fantastic in the second half. In his 19 minutes he went 5-7 from the floor and had 12/5

He was making big time pressure shots in big time moments, and don’t let me allow you to forget Ainge also got an additional lottery pick when he made this selection. I wouldn’t call it a perfect debut, but it was pretty close.

– There were questions how this new Celtics team would look in terms of heart, given who they traded away over the summer. Well, I can say with full confidence, that not a goddamn thing has changed. This was the exact same resiliency we saw last year, and a level of fight that despite the loss, makes me confident in this team. After the injury, it wouldn’t have surprised me if the Celtics lost this game by 50. They were completely lost, they stopped playing basketball, and instead had some of the worst possessions I think I’ve ever seen. They looked like they wanted to just pack it up and leave.

Then Brad worked his magic at halftime, and something clicked.

In that second half, as a team, the Celtics had a +24.6 Net rating. Their offense excelled (119) and they locked in on the defensive end (94). They crawled back into this game by getting back to playing the brand of Celtics basketball that has identified this team for decades. I’m talking 14 assists on 20 baskets, they were aggressive, taking 21 FTA after just four in the first half. They caused turnovers (11), and over the course of those 24 minutes convinced me that maybe, just maybe, this team will be OK.

Just look at the difference in FGA between the first half 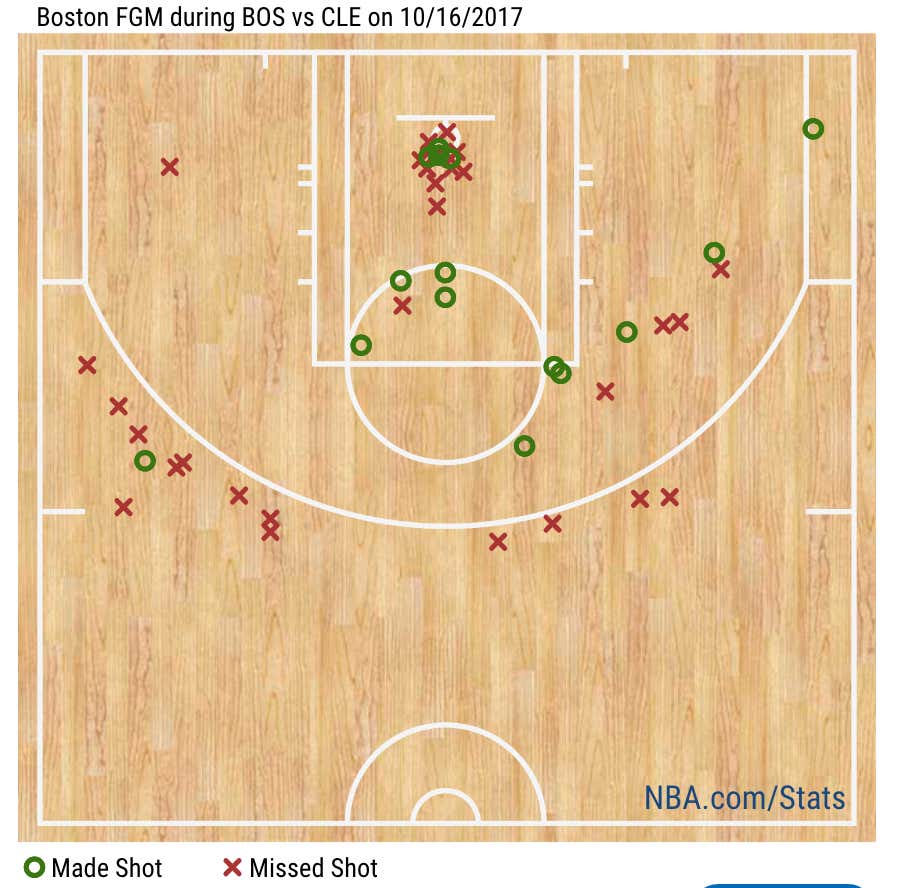 and the second half 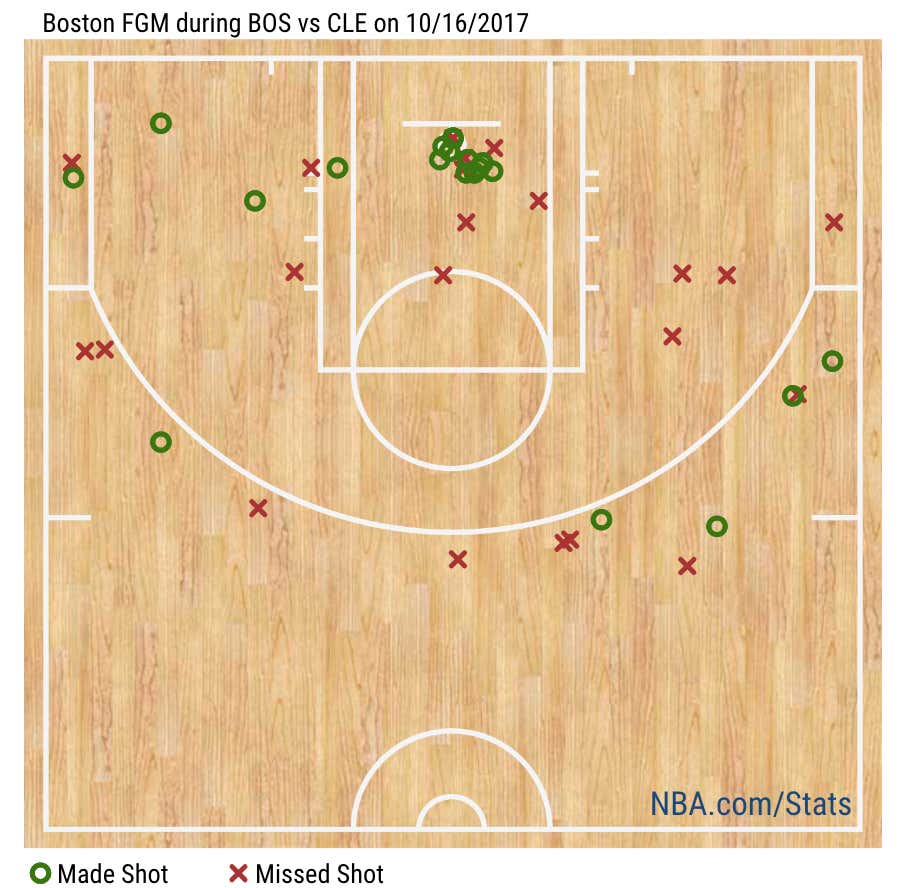 – It’s also hard to not be thrilled with another Celtics debut, this one coming from Kyrie Irving. I will take his 22/10/3 on 8-17 shooting (4-9 from deep) all day. 20/10 is something he did 8% of the time as a Cav, and we’ve already seen it multiple times as a Celtic. When the game entered the fourth quarter, and this team needed a closer, Kyrie stepped up.

If this doesn’t excite you, allow me to go even deeper. I would argue that offensively, Kyrie wasn’t even close to as good as he;’s going to be. His 99 offensive rating is way too low for the caliber of player he is. On the other side, his defense was more than solid. If he were to live in the 101 Dtrg range like he did last night, that’s going to make all the difference in the world. You didn’t know how he would respond coming back to CLE, and even though he had that missed layup and missed three late, I was very impressed with his performance. I really wasn’t expecting him to be this willing of a passer because we hadn’t seen it before, so with the idea that things will only get better as time goes on, and it’s already this good, is encouraging.

– Here’s something else that’s encouraging, the Celtics played CLE and did not get destroyed on the glass. Keeping it within 5 is usually the magic number for this team, so seeing the final numbers be 50-46 is much better than I think any one of us thought it owuld be. CLE throughout the years has tormented the Celtics on the glass, and yes, while it was a Love OREB that essentially won the game for CLE, that doesn’t take away the effort we saw from the Celtics here. Five player with at least 5 rebounds, that collective team effort is exactly what I want to see.

– If you want to know the value of Marcus Smart, this was a perfect microcosm of who he is as a player. In the first half, he killed them, with poor shot selection and decision making, he couldn’t buy a basket. But make no mistake, this comeback does not happen without his second half. His defense was maybe some of the best I’ve ever seen him play, and I loved that once he realized he had Kyle Korver on him, he attacked time and time again. The full line, 12/9/3/2/2 is the most Marcus Smart line ever, and it’s no surprise he led the bench with +12.

– He struggled from the field, but in his 9/7/5 performance something stood out to me from Al Horford. He was engaged, he showed emotion, he played angry. Was it classic CLE that he got a tech just for clapping at Jae Crowder? Yes. But for a guy who last year was given shit for looking disinterested, or not intense, or any of that bullshit, I didn’t get that feeling last night, in fact, I got the exact opposite.

– Here’s what we also learned last night. The Celtics really, really missed Marcus Morris. As strong as Jaylen looks, he still has a really tough time guarding Lebron and here’s why. It felt like every time Lebron found himself matched up with Jaylen, he immediately went to the post. That’s OK, Jaylen is made of stone so he had the body to absorb the hits, the problem is, the dude bites on every pump fake known to man. Him staying home more will come with experience, but in the final minutes of this game, I did not feel confident at any point that the Celtics were going to be able to stop Lebron from scoring. That’s still a problem. There is no Jae Crowder to throw, and now no more Hayward to throw at him and it showed.

– Speaking of the final moments, it was very hard to stomach that not only was the only three Kevin Love made the game winner, but that this game basically came down to he made his, and Jaylen missed his. Add in that OREB with around 1:40ish left to draw 2 FTs, it was if the Celtics let up their guard in the last 90 seconds, a mental mistake that clearly cost them. Why does it feel like Kevin Love always makes a big play/shot to beat the Celtics? Is that because he does?

– I find it almost inexcusable that after Kyrie made multiple threes in a row, that he did not take a single shot for neawrly half the quarter. He missed a three with 5:33 left in the fourth quarter (after making 3 straight), and he did not take another FGA until 0:33. That is inexcusable on behalf of his teammates, and frankly, would never happen with Isaiah. Someone is going to have to explain this to me, how someone who was basically winning the game for you, does not get one shot for almost half a quarter. I think this is partially on Brad, and partially on his teammates. One play stuck out in particular during the Celtics’ meltdown, and that came with 1:04 left down by 1 point.

To me this was just inexperience. Tatum made the right play, Smart did appear open, but you have to be aware of the cheating Lebron and throw a better pass. One with a little more purpose.

– Can’t say I’m surprised that the Celtics went to CLE, and found themselves getting stupid techs, and a gigantic FT discrepancy early in this game. I’ve seen enough games in CLE to know that’s just how it goes. Doesn’t make it right, isn’t why they lost, but you can’t say that isn’t even remotely frustrating.

– After that gigantic comeback, to end the game on the wrong end of a 7-1 run is what I would call rubbing salt on the wound.

– Like I said, you get used to this kind of stuff playing in CLE

– Everything about the offense immediately following the injury. Can’t say I blame them, but that doesn’t mean it wasn’t ugly basketball

So I won’t blame you if you woke up today feeling a little conflicted. Obviously we are all heartbroken over what happened, but at the same time seeing us being able to hang with CLE has me confident. This team is still going to be really good. I’m excited for the additional role Tatum/Brown will have, even if I absolutely despise the reason for it. This team is adding Morris/Yabu to the mix and just went down to the last possession with the team they are trying to catch after not even playing well for half the game. If there is one person I trust with leading this team after last night, it’s Brad Stevens, and while initially I thought playing tonight was a bad thing I’ve changed my mind. Sometimes the best thing is to just play basketball, and the Celtics come home tonight to play MIL to do just that.

Who am I kidding, it still fucking sucks. 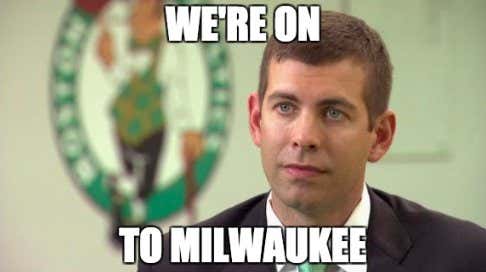 All highlights come from the Highlight God @Timi_093.