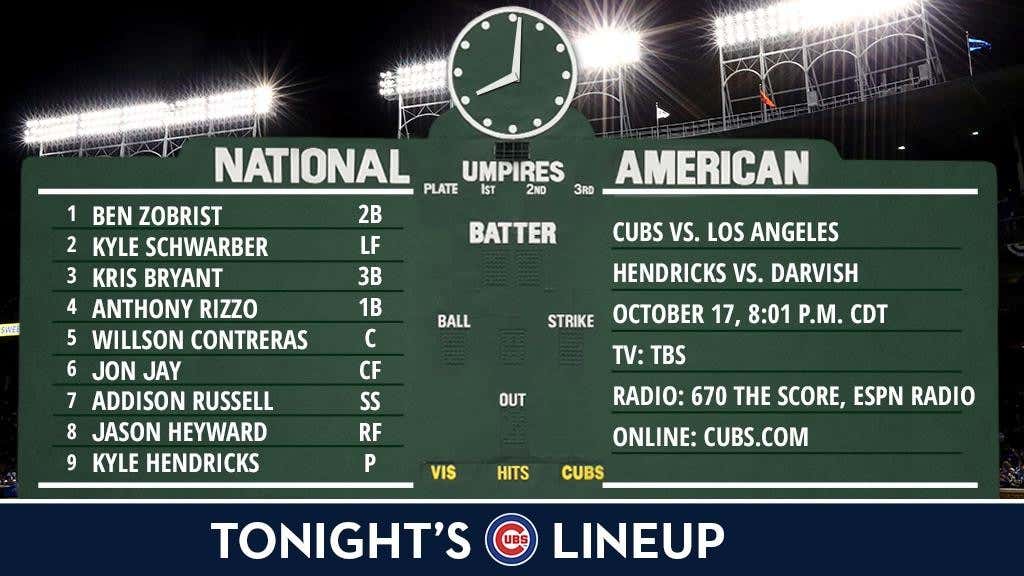 The Cubs are down 2-0 and I officially don’t give a flying fuck. It’s first team to 4 wins and last time I checked the Cubs have a pulse. So for the time being, cool it. Is there pressure? Yes. But we’re looking to Anthony Rizzo and Kris Bryant to figure it out. Name two active players on the same team that are better suited for this kind adversity.

In the meantime, I’m going to live blog my brains out tonight because the Cubs need it. Fingernails be damned I’m about to do some damage.

I said in the pregame mailbag that the Cubs needed to shake it up offensively and that’s exactly what we’re getting. Although I’m severely disappointed Jason Heyward starts over Albert Almora, I’m thrilled Bryant and Rizzo get moved down a spot in the lineup. And honest to god Kyle Schwarber thumped righties throughout the second half. So him in the 2-spot means he gets to face Darvish after working through Zobrist’s professional at bats. If Zo puts together a quality first AB meaning he sees 6+ pitches, squares up a ball, reaches base, etc. then I think Schwarber unleashes first pitch with a ball into Lake Michigan. That’s what I smell.

Also, Jon Jay moving to the 6th spot is a brilliant move. Like brilliant brilliant brilliant. Here’s why: Maddon is essentially breaking the lineup into two pieces tonight with Jay batting 6th. Jay works long at-bats and is a high OBP guy. If the top of the order is slow to start, Jay can be the second spark plug. Also, I like the fact that Jay can slow the tempo down for Contreras and Russell. I like his experience/approach inbetween the two youngsters because it can help prevent Darvish from getting in a groove.

Darvish needs to be forced to throw a lot of pitches early. We don’t need him feeling his slider in the first inning. We need him struggling to find his two seamer down in the zone. I am severely hoping that’s the Darvish on the mound tonight in Wrigley. And if not, we’re still going to light his ass up. This means nothing to Darvish. It means everything to me. Play ball.

Dodgers – Masterful inning from Hendricks to start. I think the young guys on LA will really struggle with Hendricks tonight. I’m okay with a Turner walk when you remember he’s hot AF and there’s no need to let a guy like that hit a 2-out double or worse. Puig is going to be confused all night so as long as Turner is hitting with runners on, I’m pretty confident Kyle has a night.

Cubs – Idk what to say other than I literally just wrote this:

If Zo puts together a quality first AB meaning he sees 6+ pitches, squares up a ball, reaches base, etc. then I think Schwarber unleashes first pitch with a ball into Lake Michigan. That’s what I smell.

Okay it’s not Lake Michigan it’s 12th row up in the left center bleachers. Sue me. Point is Schwarber has been caged up like an animal since the NLCS started and Yu Darvish specializes in throwing cement mixers in the first few innings before he gets settled in. KEYWORD BEFORE. That’s why the Schwarber knock is so so big. It’s a big punch squarely in Darvish’s big ass face.

In the meantime, Contreras singles AND bat flips with 2 outs giving the Cubs 3 hits in the inning not including a piss rod from Zobrist to lead off the game. Point is there’s pressure early and Jon Jay gets a chance to work an AB with runners on and 2-out. He fails. Miserably. But that’s atypical and I’ll take my chances on Jay putting together a nice AB if we find ourselves in the same position again.

Dodgers – Andre Ethier sucks. And yet here he is doing damage against Kyle Hendricks. That’s kinda how I think it works with Hendricks. Young guys don’t scare me at all. It’s the veterans that have success and even though Ethier sucks (he sucks, trust me), he’s able to get the barrel on a fastball and send one out to right. The stars aligned on that swing and pitch. Do not be discouraged.

Outside of that, Chase Utley disgusts me.

Cubs – Nothing doing. I am legitimately upset that Jason Heyward is getting ABs and Albert Almora is not. I just yelled at my fiancé as she asked me “would you like me to make extra butternut squash ravioli?” as Heyward lobbed out to right and I’m like MAKE THE FUCKIN RAVIOLLIS ALREADY.

My passion is a blessing and a curse

Dodgers – We   r e a l l l l l l l l y   need to stop throwing Chris Taylor pitches down the middle of the plate. Just not a good idea so far as he hits another big homerun. I hate Chris Taylor but respect his blatant steroid usage.

Cubs – Rich Hill has a nice interview to open the inning and I have to remind myself that he didn’t get his shit kicked in by the Dodgers 9 years ago in the opposite dugout. It’s interesting to hear him reflect on an up-and-down career that finds him now, clearly in its 4th quarter, talk about how he’s realized his potential. And while I’m listening to Rich Hill talk about changeup consistency, Ben Zobrist grounds out to second base on the 6th pitch of his at-bat. And then it dawns on me.I will never forgive Rich Hill.

Schwarber then works a nice at-bat before Bellinger makes an awesome play on a piss-rod to right. Kris Bryant follows with his 2nd hit of the game bringing Rizzo to the dish for a massive opportunity but he grounds out to Justin Turner thoughtfully positioned in shallow right field. Fuck that shift, and fuck Yu Darvish.

Dodgers – Kyle does not look sharp. Joe’s mid-game interview only makes me more upset so I’m going to have a couple beers and see you guys in the bottom half of this inning.

Cubs –  Addison’s infield single smelled like it could lead to a big inning but it doesn’t Yu Darvish is pitching well enough. Jason Heyward walks on 4 pitches, almost intentionally so don’t get too excited about that. And we don’t pinch-hit TLS or Ian Happ for Hendricks because. Because.

WHAT THE FUCK IS GOING ON.

Idk what to say I’m going to barf Hendricks better be perfect for two more innings.

Dodgers – Hendricks gives up another run which hurts even more because I wanted Joe to pinch hit TLS in the 4th for him. Flip out Heyward, move Zo to right field. Runs are hard to come by with this Dodgers bullpen and you need to play with a sense of urgency immediately. Get lost if you think otherwise.

Dodgers – Kyle Hendricks puts first two guys on. He comes out, further justifying my original point of pinch hitting for him in the 4th but who fucking cares. CJ Edwards certainly doesn’t as he walks Yu Darvish on 4 pitches with the bases loaded. Bad guys lead 4-1.

Dodgers – It’s so bad I’m getting to the point that I think I might be bad luck. Maybe I’m the mush. I’m sitting the rest of this out. Good luck to both teams just kidding. Also as I type that Strop rolls a double play ball so that just tells me I’m moving in the right direction. See you guys at Big Cat’s ESPN debut when it’s 2-1 Cubs.