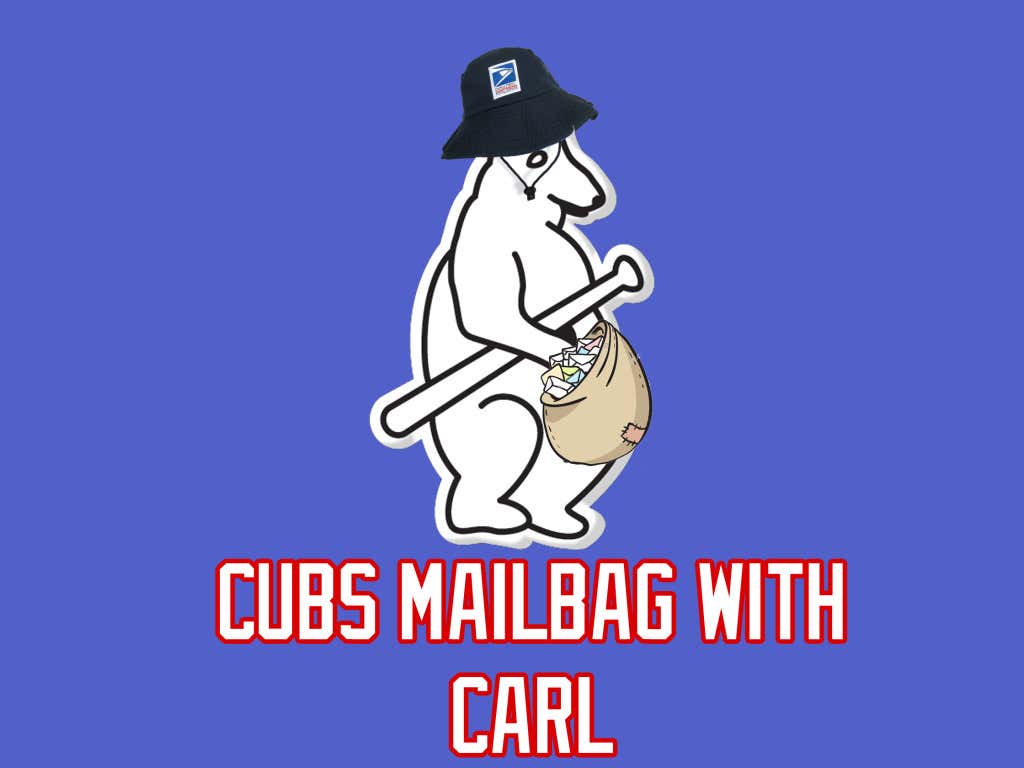 First pitch is hours away so here’s some mailbag to get your mind moving in the right direction. Remember, last time the Dodgers were up 2-0 in an NLCS they lost 4 games in a row to the St. Louis Cardinals. Also remember, Cubs were down 2-1 last year and then a Ben Zobrist bunt single sent that series into a tailspin.

Am I the most comfortable baseball guy in the world right now?

But I’d be a liar if I said the Dodgers scare me +2 in the series. Let’s get to the questions.

I’d say it’s a coin flip between 6 and 7. My gut says 7 but I have to imagine a little bit of momentum goes a long way in the clubhouse. A win tonight would be huge and I have a strong feeling it will be there for us this evening. Again, that would make it 2-1 and the last time the Cubs were down against the Dodgers 2-1 in the NLCS they won the World Series.

I’ve been on the Albert Almora train since it departed Red Line Radio LLC Headquarters back in April on Opening Day. I cannot make this blatant enough. Albert Almora is a superstar in the making. We aren’t necessarily at Ground Zero because he’s already shown he can play. But I think it’s safe to say his absolute best days are ahead of him and I’m willing/wishing/forecasting that the 2017 NLCS is going to be the spark in his career because it will be such a spark for the club.

The only spot to hit LaStella in the 9th was for Almora and that was with 2-outs. Is TLS better suited to get on 1st? Yes. But Almora is a better threat for a solo dinger or 2-out double. Also that then would create a defensive problem in a 1-1 ballgame.

More importantly though, I want to find an AB for TLS in Game 3. I need it. He puts together just ridiculously good AB’s and I think that’s the best counter punch to the power arms in LA’s bullpen.

Indeed. And consider that the “etc” in your question includes: Schwarber, Javy, Almora, and Addison. I think you get their best effort when the collective group has a chip on their shoulder. It’s been hard to get that from this team throughout the year but I think we’re sitting on a bomb right now. The boys have traveled from Chicago to DC to New Mexico to Los Angeles back to Chicago in the last 5 days. They’re exhausted. They looked like dogshit. And they could have won either of those games.

They know they’ve been slumping. They know their playoff run differential is -12 (or at least they know they’re playing like a -12 in 7 fucking games). Like it’s all percolating around the club right now. They know that they are so much better and honestly down 0-2 with 3 in a row at home and Hendricks tonight against Yu Darvish is like Christmas morning. I’m not joking. I’ll spot LA 2 all day.

I don’t think he puts together AB’s as well as the other guys to get regular time right now. The matchups haven’t been there. He’s not OUTSTANDING at really anything and playoff baseball is largely matchup baseball. And again he doesn’t have a done of great matchups relative to Heyward or Baez or Zobrist or Schwarber. Those are guys that can do amazing things on the field in a particular category, and you’re looking for amazing. It’s a damn shame because Ian Happ is a good fuckin baseball player and he would be starting on most other teams. I think this is just a prime example of having a lot of talent.

Extremely. Weather will be crisp and sunny, just how he likes it for a CG shutout. Honestly though I saw major discomfort in his last start and a lot of that could have been nerves. Or maybe he had the flu. Idk. All I know is his fastball command sucked and if you’re asking me if he has shitty fastball command in back-to-back playoff starts then I’m going to tell you NO WAY SAUSAGE KING. I like Jake in a bounce back effort in so many ways. He’s calm. He’s collected. LFG.

That’s a rather in-depth question and Spoiler Alert Guys: I LOVE IT.

Lester if he’s 100% because he’s literally made for this moment. Jon Lester is such an animal in the postseason. Isn’t that right Jared?

This is a loaded gun because I’m a good vibe guy and I want to end on good vibes here even though I can clearly slam Joe Maddon but don’t want to. So I won’t. But you can if you’d like and that would be a-okay. I digress.

Figure out how to get Kyle Schwarber AB’s. The guy can change a series with one swing. Yu Darvish is a mistake pitcher and I think Schwarber needs to be in the lineup against him, which means Jon Jay in center, Almora in right and Schwarber in left. That’s the offensive outfield for Yu Darvish. And I think Javy may have to take a seat tonight with Zobrist at second to give the lineup he best chance to score some runs behind Hendricks. They look like dogshit and I need a 7 spot to get this party going.

But it starts with getting Schwarber in the lineup tonight. I can feel it in my plums.

Finally, I talked with Taylor Davis last night from the Cubs about his career and the series. He told his story about getting to the big leagues (crazy) and then we got into some matchups and self-esteem-building analysis. I think it’s good stuff and worth a listen for you die hards.