Source - Swedish professional boxer Mikaela Laurén took the theatrics to a whole other place during a press conference on Monday when she stood toe-to-toe with undefeated champion Cecilia Braekhus.

As cameras clicked away, Lauren approached Braekhus, stared deeply into her eyes and planted a kiss on her lips. At first, Braekhus reacted in horror and half slapped, half pushed Laurén away. But Braekhus soon started laughing at the absurdity of it all.

“I haven’t got that in a while,” Braekhus joked as Lauren exited stage left.

Thirty-six-year-old welterweight Braekhus (31-0) is the pound-for-pound queen of Norwegian boxing and currently holds the female WBA, WBC, IBF, and WBO titles. She will fight 41-year-old Laurén (29-4) in Norway on Oct. 21.

Take notes, people. That’s called thinking outside the box. I’d endorse her for it on LinkedIn if she had one. No one (with the exception of Robbie Fox) knew about these two broads prior to yesterday and now they’re the talk of the Internet. Are they pandering to the “lesbians are sweet!” crowd? Probably, but I’m not going to hate on them for it. That’d be hypocritical seeing as I pander to the gays.

To be honest, I’m not really all that interested in the kiss. Yeah, the build up was great and Goldilocks took on the role of the man (shocker) but  I’m more surprised at the fact that Ann Curry is in the boxing game. 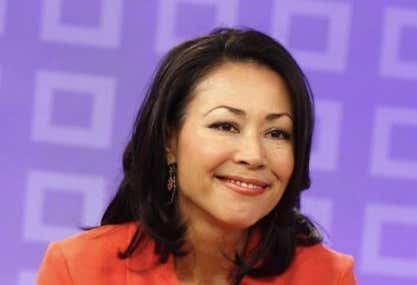 I know she had a rough exit at The Today Show but I did not see her getting into hand-to-hand combat. Lauer maybe, he has a mean streak in him. Ann was always so sweet. Maybe that’s why she didn’t beat her ass right there on the stage. Can you imagine if McGregor had leaned in and pecked Floyd on the lips? He would’ve beat his ass worse than he did in the ring.

I want my boxers as fighters not lovers. The more violent and emotional the better. Remember the Tyson pressers? Guy fought EVERYONE. And none of it was for publicity he was just a legitimate psycho. That’s what made him so electric, he was unpredictable. To be fair, so were these ladies but it’s not the kind of unpredictability that people want. Cue the Tyson best of.