Seriously Pat, this needs to be investigated. Bias for Pats is obvious. Looks dirty.

THAT WAS THE WORST CALL IN NFL HISTORY BAR NONE. GIVE ME THE REPLACEMENT REFS. WHOLE NFL IS RIGGED. BAN THE PATRIOTS — Yankees 2018 (@Sensatixn_Al) October 15, 2017

I don’t understand how that isn’t a TD for Austin Seferian-Jenkins. Patriots have benefitted significantly from some questionable calls.

#jets rigged game, that was not a fumble. It was a TD by Jets 88. #NFLSunday #nfl #Patriots

How did you get it that wrong???

The Jets just got robbed cause the league doesn’t want them to beat the patriots. This is rigged and we all know it. — Drake Honn (@dahonn0914) October 15, 2017

I’m not saying the NFL is rigged in the Patriots favor but a lot of unusual calls sure seem to go their way ???? — Aheron Liston (@AheronListon) October 15, 2017

Patriots with the rigged W.

I’m a reasonable man. I have my biases, same as anyone else. But I admit to them. And if someone wants to have a mature, rational conversation about Malcolm Butler’s strip of Austin Seferian-Jenkins, I am all ears. Let’s discuss. If it’s your contention the officials blew the call, I’ll listening. If you say the replay was inconclusive and therefore the call on the field should stand, I understand your position. Even though these would indicate otherwise. From the Jets Subreddit: 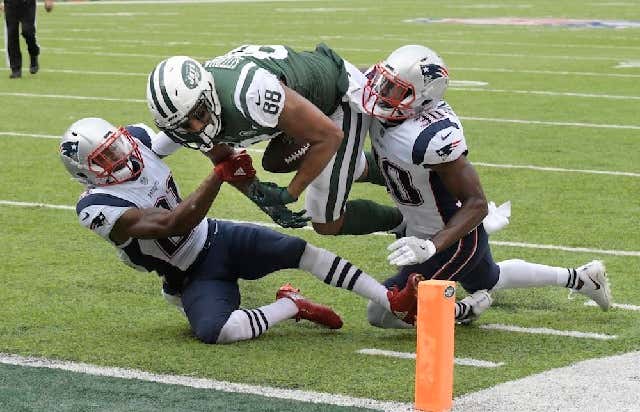 But if that’s you and you want to let your eyes lie to you, be my guest. That’s your right as an American. My beef is not with you. It’s with these other delusional little nematodes who want to believe we live in a world where a weird call goes against them not because of incompetence or some obscure reading of the rule book and especially not because of their own wrongness, but because the NFL is rigging games for the Patriots.

Are you fucking kidding me? If you’re going to publicly argue that the National Football League has a bias in favor of the Patriots, delete your Twitter account right now. Also turn over all your electronics, your car keys and any weapons you have, including scissors because you are a danger to yourself and others. What dimension have you been existing in since oh, I’ll be conservative here and only go back to … 2007? Name me some more in this pattern of officials calls all you little 1s and 0s are talking about that shows some pattern of favoritism from the league, on or off the field? Because I could spend all day describing the train Roger Goodell’s minions have been running on our buttholes for the last decade, at minimum. But I doubt I could do it justice in just one day.

Never mind explaining how the league managed to be lying in wait for ASJ to bobble a ball at the goal line and spring their brilliantly laid trap. Just tell me the why. Why a league who’s ratings are slipping, have two teams in New York, one of which was 0-5 at the time of The Touchback, would want to hose the other one? Have you decided that Goodell, his owners, broadcast partners and sponsors don’t want money anymore? I’d continue, but there’s no point. Instead I’ll just say thanks. I needed this. There are few things I love more than a divisional fan base shrieking about how unfair the world is to them. It’s been too long. Now I can go back to where I’m most comfortable, writing about the AFC East’s first place team.
@jerrythornton1