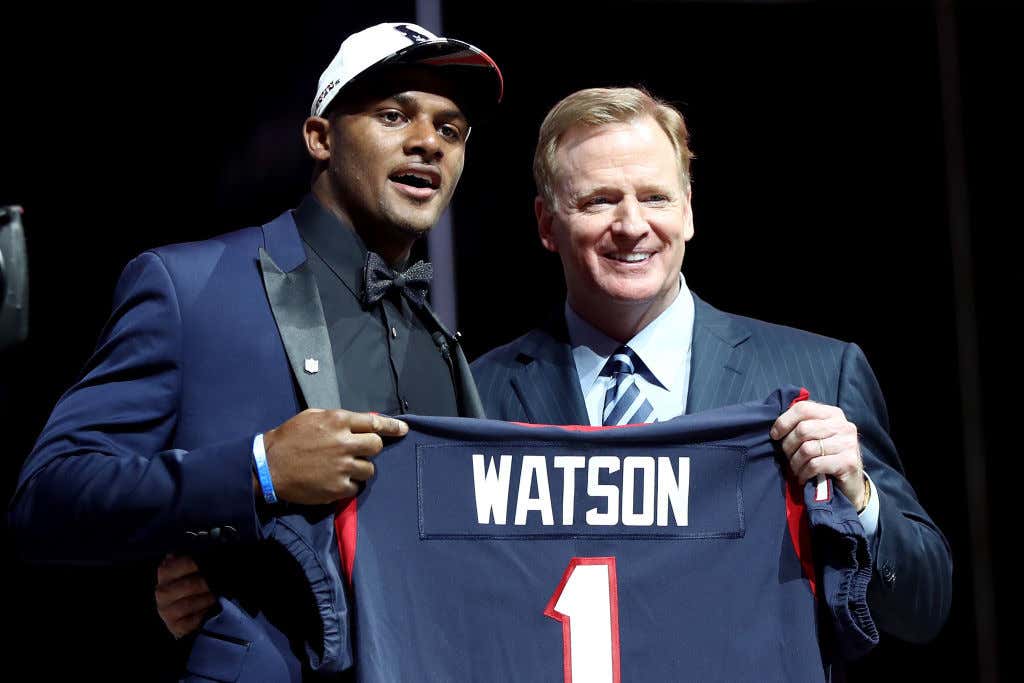 I don’t know if you guys have been keeping up with the NFL this season, I know we don’t usually touch on sports a lot around  here, but my boy DeShaun Watson?  He’s been tearing it up.   Just set a record mark – all time! – for the most passing touchdowns by a rookie through 6 games.   He has 15 after throwing for 3 on Sunday and 3 the previous game, beating Mariota’s previous mark of 13.  Leads the NFL (not just rookies, the entire league) with 4 passing touchdowns of at least 20 yards in the air.  And don’t forget, he didn’t even start to open the season.

Anyone who followed him at Clemson probably had a pretty good suspicion this was coming – not THIS good, but definitely some pretty obvious star potential.  That’s the guy Hue Jackson texted “Be ready” on draft night, poised to make the Browns’ first good QB decision since the invention of the sport of football.  However, upon checking the logo on his shirt and remembering the words on his hat said, Jackson and his bosses switched it up last minute and went another direction, trading the pick.

Annnnnd now they’re 0-6.  To be clear Deshone Kizer is a good player and has the potential to be solid – probably had a much better chance before the Browns threw him into the fire unprepared then destroyed his confidence by benching him a few days after Hue said “this young man gives us hope.”  Now they’ve got Kevin Hogan in there who put up 3 points in meaningful game time while going 20-37 for 140 yards and 3 interceptions including a pick-six against a defense missing JJ Watt and Whitney Mercilus (he had a garbage time touchdown late in the game).

The funniest part?  Hue Jackson isn’t even hiding the fact that he knows he fucked up.

“I understand the second guessing.”

Hey I love the honesty.  You don’t see that from a coach that much.  “Yeah I blew it.  What do you want me to do?  I can’t switch them around.  Unless you know a way?  Does anyone know maybe a sneaky rule that I could try and switch them?  Anybody read anything about that maybe, asking for a friend.”

As much as it sucks to say you honestly can’t discount the small chance that the Browns just straight up mixed up DeShaun with DeShone.   Also, that “be ready” may have meant “be ready, we’re the Browns, we’ll blow this move.”