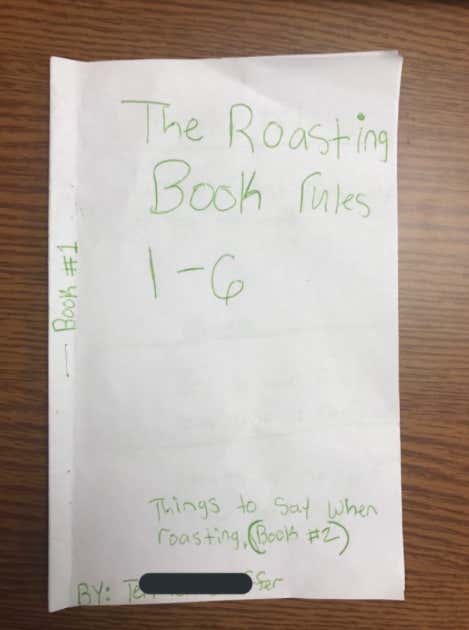 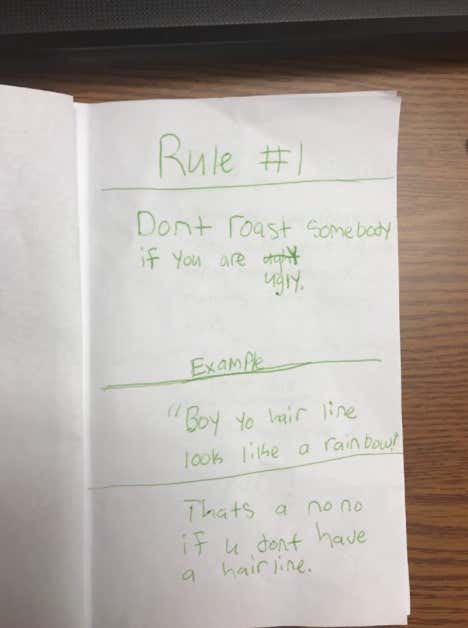 You ever get roasted by someone but have to hold back because you know you could destroy them? Someone will come at you about your weight when they have a landing strip of a hairline but if you say something you’re the jerk? It’s the worst. It always comes from the easiest targets too. This teacher is going to save a lot of kids a lot of heartache if her lesson gets through.   Don’t dish it out if you can’t take it is one of the most important things a young person can learn. Some would argue the most important other than a girl can’t pregnant if she’s on top.

I’d love to take a look at volume one of the roast handbook. I don’t know if I’m ready for comebacks yet. Usually when someone roasts me I spend about ten seconds deciding whether or not they were serious and by the time I figure it out the window for retaliation is gone. It’s either that or I fly off the handle right away. I definitely wouldn’t be able to come up with “boy your hair look like a rainbow” on the fly. Way too advanced, which explains why it’s in volume two.

I doubt the kids made the book on their own. Unless they were raised on episodes of Yo Momma it was probably an attempt to go viral. Anyone who calls herself @teacherbae is looking for attention. If not, these kids are going to be absolutely terrifying when they get older. Teacher calls on them in class, “Brian, would you like to answer that question?” “Nah, I’m good…YA JENKY HO!”

I hope they use their powers for good not evil. They’ll need some sort of creative outlet for the lyrical prowess. Maybe join a slam poetry team or get involved in the battle rap community. Scratch that- don’t join a slam poetry team. I’m going to see if Rone wants to mentor them. It’d be a shame to see such talent go to waste.