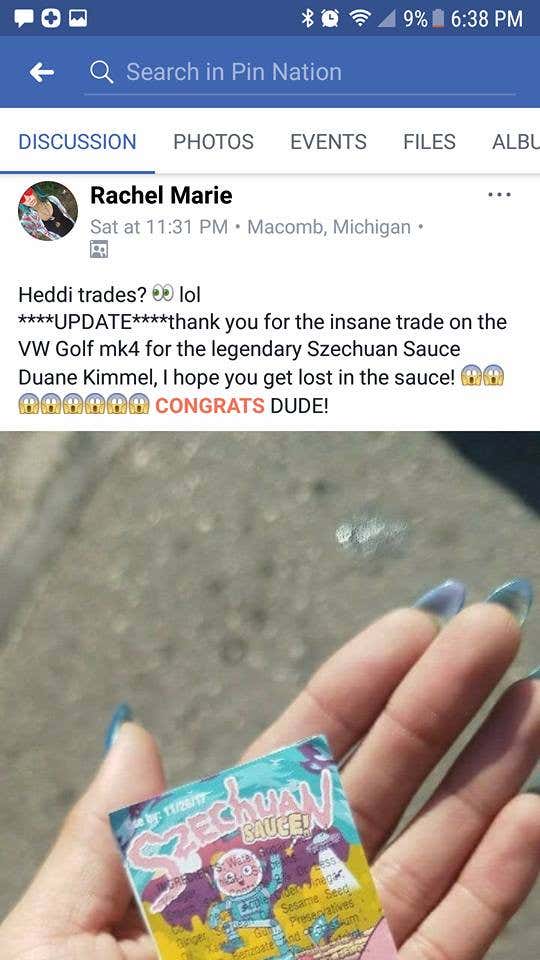 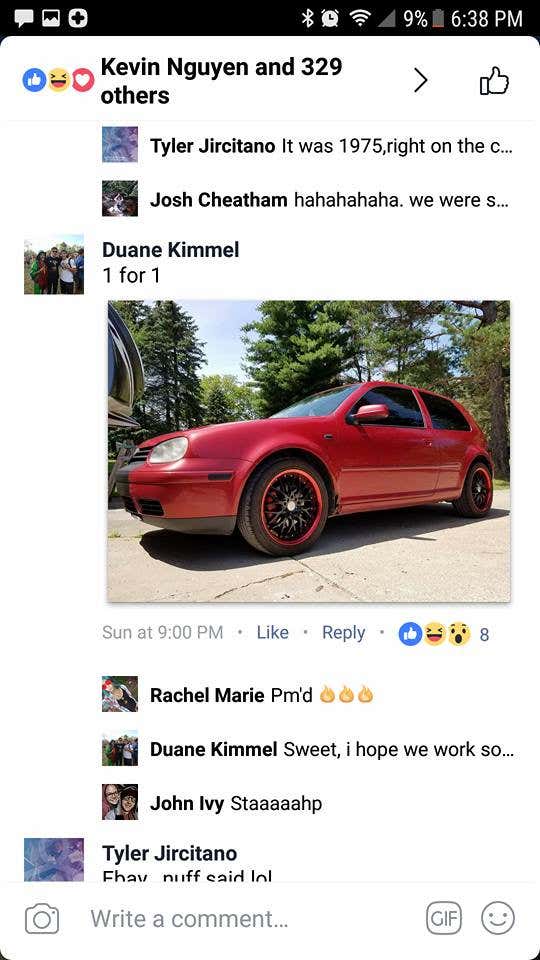 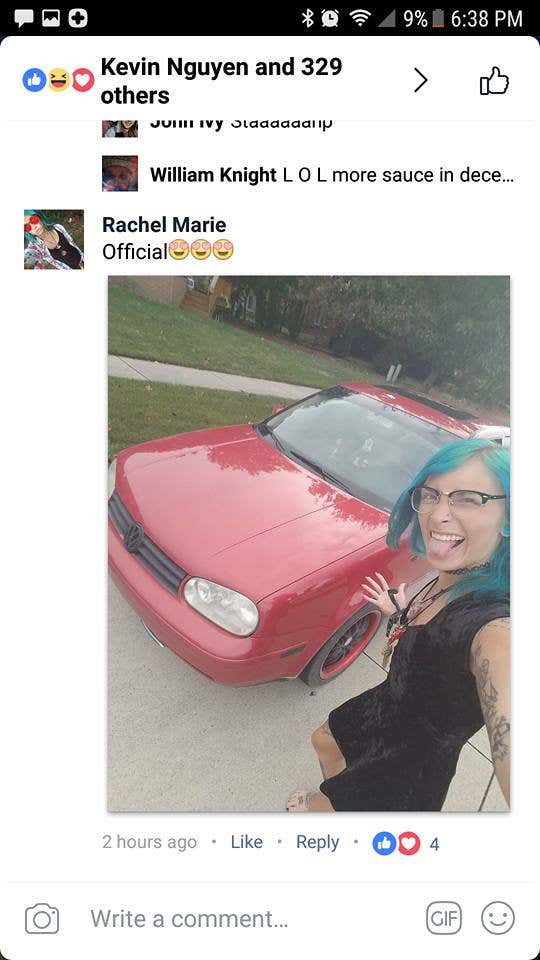 The Drive- We’ve seen some questionably-priced cars, but this trade takes the cake on oddities exchanged. Fans of the TV show Rick and Morty have begun to trade in a new currency: Szechuan sauce. In a bizarre trade, one woman happened to acquire more than she bargained for, a 2004 Volkswagen GTI.

Let’s rap a bit about where Szechuan sauce came from and understand just why it’s getting such obnoxious pricing from the public. In 1998, McDonald’s and Disney worked together on a promotion to celebrate the launch of the movie Mulan. Based on the Chinese legend of Hua Mulan, the plot of the Disney movie revolved around a young woman who disguised herself as a man to fight the Huns (alongside a Chinese army consisting of only men). As part of the promo, McDonald’s released a teriyaki-flavored dipping sauce they called Szechuan sauce, and it slowly fizzled into the night once the hype of the movie wore off. Fast forward to 2017. Dan Harmon and Justin Roiland’s hit TV show, Rick and Morty, returns with the unannounced first episode of its long-awaited season 3 premier. At the end of the episode, Rick goes on a 30-second rant about how the entire show’s plot is actually driven by his need for Szechuan sauce.

Naturally, fans bought right into the hype, and so did McDonald’s. So much so, that they actually re-released the limited-edition sauce at some locations for just a single day. But many fans still couldn’t get a packet for themselves, and the fear of missing out drove thousands to restaurants across the country. So what do you do when you find yourself holding one of corporate America’s coveted items? Sell it on eBay of course! A single packet of the sauce is easily running upwards of $100. Some people have theirs listed way into the thousands of dollars, and a promotional half gallon of the sticky sauce in a custom Pelican case is currently auctioning for more than $21,000 (another auction without the case is priced at $15,000).

But, if you’re Rachel Marie from Macomb, Mich., you get more than a few hundred bucks. Originally looking to trade her Szechuan sauce for a collection of pins, she was surprisingly offered something even better. She is now the proud owner of a 2004 Volkswagen GTI. Luckily for her, it wasn’t even a base model that she received in the trade. The German hatch features Volkswagen’s 1.8-liter turbo 4-cylinder motor coupled to a 5-speed manual transmission, both of which options keep the car worth a bit more than its 2.0-liter and automatic counterparts.

So McDonald’s Szechuan Sauce has been the hottest shit in the streets for a while now. Liquid gold. Rick and Morty put it back in the public’s consciousness and Mickey D’s brought it back for a limited edition release this weekend, and as KMarko blogged, it caused absolute CHAOS. I’ll admit that I went to my local McDonald’s and asked for it, knowing there was a snowball’s chance in hell that Szechuan Sauce made it up to the burbs. And I might as well have been talking Szechuan (if that’s a language) to the lady at the drive thru window when I asked her for some. I instead happily settled for some nuggets, Sweet & Sour Sauce, and McDonald’s Coke, which is the best Coke on the planet outside of Santa Coke.

But not our friend Rachel Marie. She hit the motherfucking jackpot with her little bucket of Szechuan flavor. Usually when I see a story like this, I am happy for whatever person was able to snake some sort of real life prize for something that costs about 1 cent in the real world. Back in 2005 when the internet was just a magical place of Limewire songs and Kimbo Slice fight videos (RIP) instead of a place for people to share their very well-informed political opinions on social media, there was the one red paperclip saga. For those that don’t want to click a link, I have transcribed the then-cultural phenomenon here:

MacDonald made his first trade, a red paper clip for a fish-shaped pen, on July 14, 2005. He reached his goal of trading up to a house with the fourteenth transaction, trading a movie role for a house. This is the list of all transactions MacDonald made.
1. On July 14, 2005, he went to Vancouver and traded the paperclip for a fish-shaped pen.
2. He then traded the pen the same day for a hand-sculpted doorknob from Seattle, Washington.
3. On July 25, 2005, he travelled to Amherst, Massachusetts, with a friend to trade the doorknob for a Coleman camp stove (with fuel).
4. On September 24, 2005, he went to California, and traded the camp stove for a Honda generator.
5. On November 16, 2005, he made a second (and successful) attempt (after having the generator confiscated by the New York City Fire Department) in Maspeth, Queens, to trade the generator for an “instant party”: an empty keg, an IOU for filling the keg with the beer of the bearer’s choice, and a neon Budweiser sign.
6. On December 8, 2005, he traded the “instant party” to Quebec comedian and radio personality Michel Barrette for one Ski-Doo snowmobile.
Within a week of that, he traded the snowmobile for a two-person trip to Yahk, British Columbia, scheduled for February 2006.
7. On or about January 7, 2006, he traded the second spot on the Yahk trip for a box truck.
8. On or about February 22, 2006, he traded the box truck for a recording contract with Metalworks in Mississauga, Ontario.
9. On or about April 11, 2006, he traded the recording contract to Jody Gnant for a year’s rent in Phoenix, Arizona.
10. On or about April 26, 2006, he traded the one year’s rent in Phoenix, Arizona, for one afternoon with Alice Cooper.
11. On or about May 26, 2006, he traded the one afternoon with Alice Cooper for a KISS motorized snow globe.
12. On or about June 2, 2006, he traded the KISS motorized snow globe to Corbin Bernsen for a role in the film Donna on Demand.[3]
13. On or about July 5, 2006, he traded the movie role for a two-story farmhouse in Kipling, Saskatchewan.

That story is the closest thing to the American Dream coming to fruition that I have seen in my lifetime. Granted it ended in Canada, but still, it gave hope to a young Clem that wouldn’t leave my soul until years of living in the real world.

However, this Szechuan Sauce story has me pissed for a bunch of reasons. For one, it all started on a pin trading message board. If you are on a pin trading message board, you are a creep. That’s not name calling but just facts. Two, that Facebook post just smells fishy to me. Like someone took the picture of a girl posing with a car, slapped a link to their page in a Facebook post, and Fake News’d the shit out of the world (present company included). And finally, a car just falling into your lap is too easy for my brain to accept. It’s one thing to scrap and claw and build your one red paperclip into a two-story farmhouse brick by brick. It’s quite another to go on a pin trading board with a bunch of sad Midwesterners and end up with a car. Every month I make my car payment, I am going to think of how unfair it is that this chick got a car dropped into her lap while I continue to grind out smut blogs to keep my family financially above water. McDonald’s already announced they are going to come out with more Szechuan Sauce because everyone went bonkers after it sold out everywhere. So the owner of the car is even more of a goddamn fool than he was 48 hours ago.

Now I will admit that part of my saltiness for this type of entrepreneurial move goes back to the late 90s. I never got into trying to buy things that could be rare so I could flip them. But eBay was the hottest shit in the streets and for the first time in more than a decade, a Star Wars movie was coming out. That’s right, teenage Clem invested HEAVILY in the Phantom Menace toys. I still have unopened boxes of Jar Jars and Darth Mauls laying in my parents’ attic, hoping to hit it rich on the back of Hasbro. Instead the bubble burst all over my face like a Peter North video and I was left with a shitload of shitty toys from a shitty movie from a shitty trilogy. Just an absolute travesty. Fuck Szechuan Sauce* and fuck the Phantom Menace.