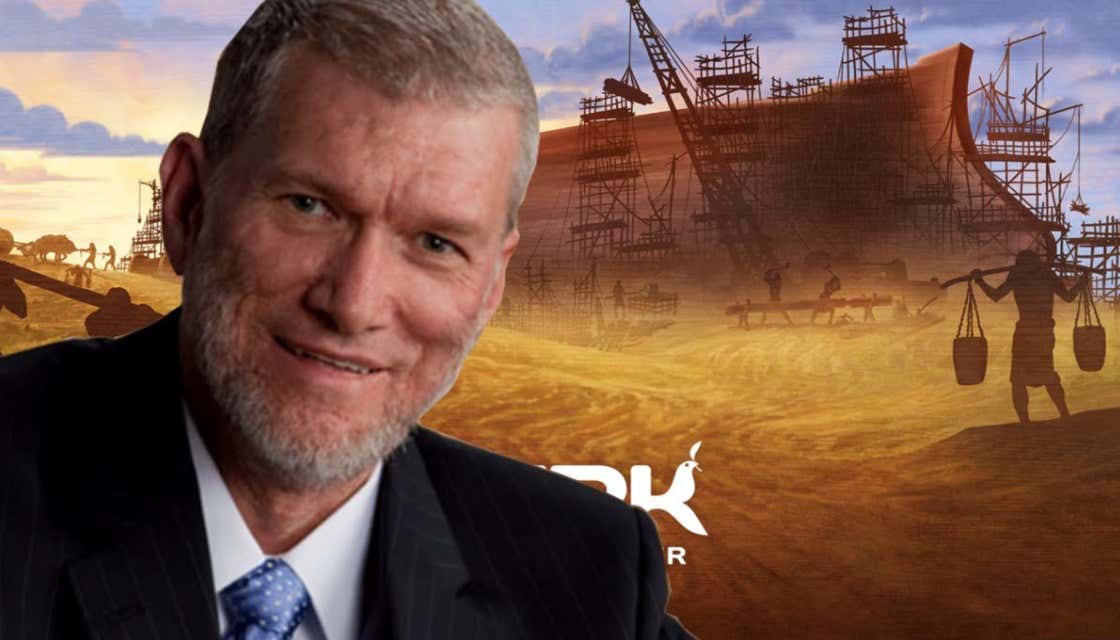 HuffPo- Creationist Ken Ham, who runs a Noah’s Ark attraction in Kentucky, is calling on followers to put some Jesus into Halloween.

In a new blog post, Ham said all of those trick-or-treaters coming to the door on Oct. 31 provided “a fantastic opportunity to share the saving gospel with your friends and neighbors.”

Ham’s message was actually a sales pitch for his organization’s “Halloween Learn & Share Kits,” which include religious pamphlets as well as fake money with Bible messages that are intended to be given out to candy-seeking children.

The fake million-dollar bills come with either a picture of a dinosaur or Noah’s Ark on the front, with ominous warnings of damnation on the reverse side.

“Have you ever lied, stolen or used God’s name in vain?” a message on one of the bills reads. “If so, you’ve broken God’s law. The penalty for your crimes against God is death and eternal hell.”

Hey Ken Ham, just chill the fuck out, alright bud? Take a day off from thumping bibles down the throats of the neighborhood kids. Your “Halloween Learn and Share Kits” are definitely scary, but not in a Boo! kinda way. More like a…. well, I’m going to burn for eternity in the fires of hell kinda way. Every single kid has lied. For you to let them know they’re going to hell as a result–on Halloween, no less–fulfills the “trick” part of trick-or-treating. But your dinosaur bible cash is a terrible treat. Balance the equation, Ham.

Hopefully, most of the kids know to skip your house:

“The one with the nativity scene in front. And it’s not some ironic holiday joke about how Christmas starts earlier and earlier each year.”

By the way… it just struck me how dangerous unsupervised trick-or-treating is. Setting aside the obvious dangers of nougat-based tooth decay, high blood pressure, diabetes, costume jealousy, and mistaken identity, it would seem like a perfect opportunity to invite children into your home. Every child is coached by their parents to never enter a windowless van when a stranger offers you candy. That’s like the first thing you learn on “How To Stay A Virgin 101,” the controversial PBS children’s program that was dropped when parents started a petition that collected 36 million signatures.

But the lines become blurred on Halloween. Most kids know to stay on the stoop, drop the “trick or treat” line, and wait for the old person to ask, “are you a sexy Power Ranger/sexy nurse?” But what happens when said old person invites you over the threshold because they forgot that it was Halloween and all their candy is stored in their bomb-proof basement?

“Wow, is it Halloween already? I thought we ended that back in 3027. Well, good news youngster. I’ve got some salt water taffy saved in my bunker, right next to the canned goods and the ammunition. Come on down, let me show you my battery collection!”

Confusing, right? On the one hand, it would be dope to see some real guns on Halloween. But on the other, salt water taffy is a fucking disgraceful “candy.” Any candy whose ingredients include salt water should be returned to the sea. That’s just flotsam in a wrapper. Maybe let the old man rummage for his taffy while we scamper on to the next house, whose owner is handing out candy trademarked by Hershey, a company listed in the Dow Jones index! Back to normal!