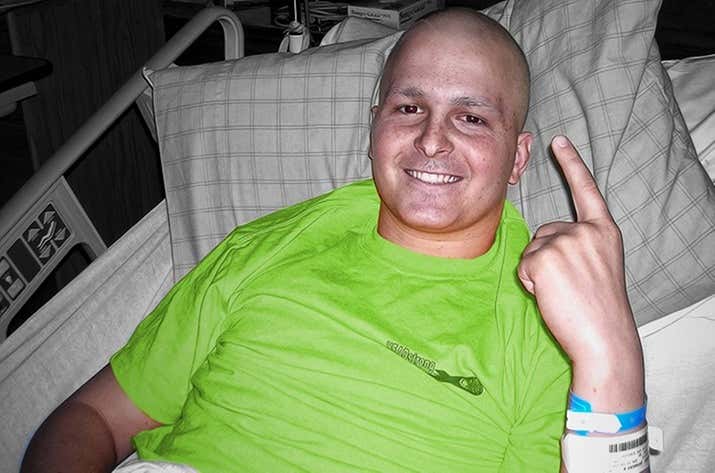 Anybody who is in the lacrosse community knows of HEADstrong at this point. In case you don’t, I’ll try my best to explain starting with the fact that it’s an incredible organization that I couldn’t be prouder of. Nick Colleluori grew up one Delco town over from me in Ridley. He was a stud football player and a stud lacrosse player and ended up getting himself a scholarship to play lacrosse at Hofstra. Unfortunately during his time at Hofstra, he was diagnosed with non-Hodgkin’s Lymphoma. A kid having the time of his life, healthy as could be playing the sport he loves at the college level, and then he gets that news dumped on him. You’d think it would be pretty devastating but what Nick was able to do after his diagnosis was create a Foundation that he knew wasn’t going to be able to help him personally, but ultimately has ended up helping over 14,000 cancer patients so far and has raised $10 million to this date for cancer patients and families in need. Nick passed away in 2006. He didn’t have the same resources that some patients have today thanks to him and his family’s efforts.

It’s been close to 11 years now since Nick passed and I don’t think anybody but him could have envisioned how big HEADstrong would have blown up at this point and how much tremendous work they’re doing. Like I said, they’ve raised $10 million for families in need. They have club lacrosse teams, they have fundraisers, they’ve bought a house in the Philly area that provides free lodging and support for families seeking cancer care in Philadelphia. Credit to the Colleluori family for keeping his vision alive and taking it this far. Anyway, I can’t really do Nick’s story justice so if you’re interested in learning more about it, you can head to their website or seek out any member of the Colleluori family who are always happy to talk to anybody about anything related to the cause. What I’m here to talk about today is the start of Lacrosse Mustache Madness.

The story of how Lax Stache Madness got started is actually pretty great. As everybody knows, one of the side effects of chemotherapy is hair loss. That physical change takes a different toll and different patients. Nick didn’t necessarily mind how his hair loss made him feel personally, but he didn’t want it to effect his friends and his family who were constantly visiting him in the hospital. So to offset hair loss, Nick did the best he could to grow a mustache and that would give everybody something to laugh and talk about other than the hair loss. A kid in the middle of battling cancer and all he cared about was making sure other people felt comfortable around him. That goes to show of what kind of guy Nick Collelouri was.

So the campaign has been going on since 2009 now. It’s all student-athletes and college kids letting the staches rage for a few weeks and raising the money on their own. It’s mostly college lacrosse teams at the moment but they’re looking to grow to college hockey and college football and college anything. What makes HEADstrong so unique is they operate the way that college teams do in the sense that everybody on the team immediately becomes family. So having college athletes take on this campaign is huge for what they are trying to do.

I know that Barstool Sports isn’t exactly a college sports team but I feel like we’re not that far off (aside from the athleticism). So with that in mind, I know that I’ll be putting the razor down from October 19 – November 28 and hopefully some of the other guys do as well. The goal for this year’s campaign is to raise $200,000 to match the 200,000 families that will be devastated by a cancer diagnosis during the same 6 week period. I figure the least we can do as Stoolies is help raise awareness and hopefully raise some funds as well. It’s what we do best.

Click Here To Donate To The Lax Stache Madness Campaign