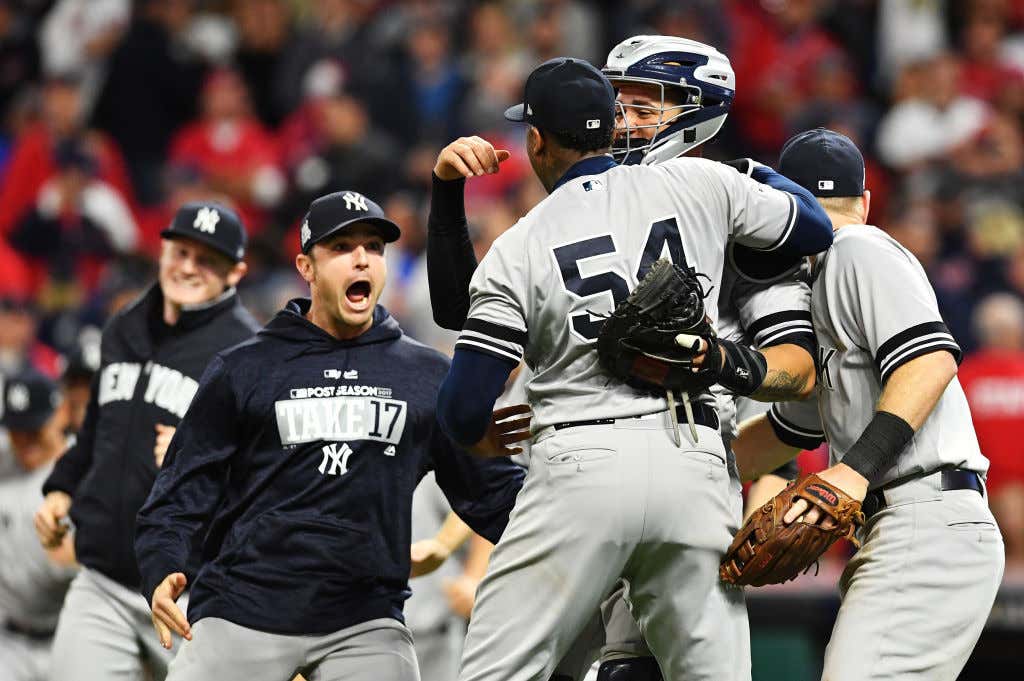 HOLY FUCKING SHIT. The New York Yankees did it. They came back from 2-0 down to the Cleveland Indians, the best team in baseball. They beat Corey Kluber twice (once technically but you get what I’m saying),something that was literally impossible during the regular season. Corey Kluber didn’t have two bad starts in a row all season, until today. Didi Gregorious led off things with a fucking bomb to right. From that moment on things got very real.

Everything was possible after that. Corey Kluber was human. The robot was malfunctioning and Didi was rounding the bases as the Yankees world was going bananas. From then on it was up to CC to quiet things done. He did just that.

Carsten Charles Sabathia was fucking electric. He was everything we needed and more. We needed a veteran presence on the hill tonight to set the tone and CC was exactly that. He came out breathing fire. He was untouchable for four innings and that’s all the Yankees needed. In the fifth inning he ran into a bit of trouble but was bailed by a huge David Robertson double play ball. For several innings the game stayed at 3-2. Robertson stayed strong and handed the ball to Aroldis Chapman in the 8th inning in a 3-2 ball game. Chapman survived the 8th as we all prayed to God the Yanks could score a run and give the offense some insurance.

After a Hicks single (reaching second on an error) and a Frazier walk, Brett Gardner stepped to the dish with two outs and two men on.

In an incredible at bat, maybe the best in baseball history, Gardner delivered the clutchest at bat of the season ripping a single into right, scoring two after a Jay Bruce error. The game was all up to Aroldis Chapman for three more goddamn outs. Chapman delivered in lights out fashion.

That’s the man we paid all this fucking money for. I’ve said it a lot lately, but the Yankees don’t win anything without Aroldis Chapman as the closer. Dellin Betances is a mental midget. David Roberston was brought on as the set up guy and not as the closer. The job was to Aroldis Chapman and tonight he shut the door and sent this team to the ALCS.

I honestly don’t believe it. I never doubted this team from the get-go with how good this bullpen was and how solid this lineup was, but in the end it was the rotation that saved this team. Masahiro Tanaka-Luis Severino-CC Sabathia catapulted this team into the ALCS coming back from the dead against the best team in baseball.

At the end of the day I’m in complete shock. Was this team good enough to beat the Cleveland Indians? Yes. Were they built the exact way to beat the Cleveland Indians? Yes. Did I think this offense would get to Corey Kluber TWICE in a series? Not a fucking shot. Didi Gregorious is literally my best friend. He was incredible tonight. The shortstop who seemingly made Derek Jeter forgettable this year was nothing short of stunning. CC Sabathia, a pitcher who was at the end of the road of his career, was rock solid and provided a much needed boost to catapult this team. Baseball is the fucking best. Anything can happen. A group of youngsters, not picked to do anything in this postseason just beat the unbeatable Cleveland Indians. It wasn’t Corey Kluber who dominated this series as a pitcher, it was CC Sabathia.

Next up is Houston, and that will be a whole different challenge in itself, but let’s enjoy this for one night.