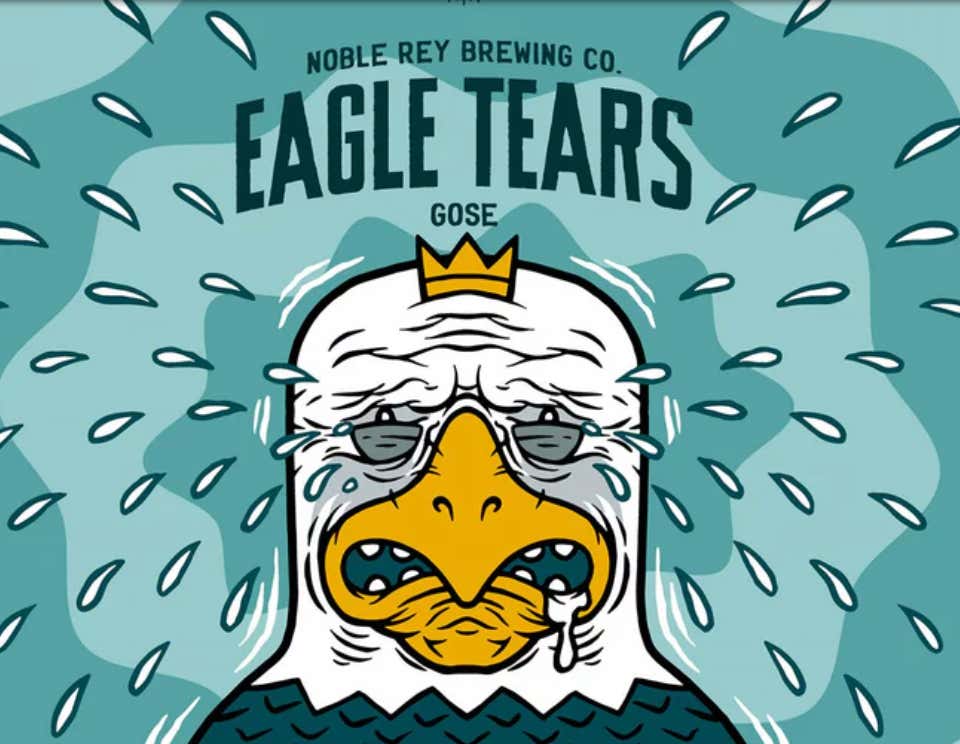 Dallas – Few things get Dallas Cowboys fans riled up like smack talk from followers of the Philadelphia Eagles. That’s why when Pennsylvania-based Weyerbacher Brewing released a seasonal beer called Dallas Sucks this football season, the locally-based Noble Rey Brewing Co. knew it had to clap back. On Tuesday, Noble Rey announced a new brew called Eagle Tears on Facebook, sharing the label image of a sobbing eagle presumably from Philadelphia. “Tommy, the head brewer, texted me the day the CBS article [about Dallas Sucks] came out and we made quick work of getting a beer formulated and the design done,” said Chris Rigoulot, founder of Noble Rey, by messenger. “Our designer, John Rubio, had a design to us within mere hours of calling him.” Eagle Tears is a gose beer clocking 6 percent alcohol content. Gose is a light German style that often features coriander and salt. The beer will be available on draft and in cans to-go at the brewery’s onsite taproom beginning Nov. 5, which gives you plenty of time to stock up before the Cowboys play the Eagles on Nov. 19. And you’ll want to grab some to take home: The can itself says “#phillysucks” and “Don’t worry, we won’t leave rings on the table.”

A shockingly try-hard play by the Dallas based beer company to instantly piggyback off of an original Philly idea. What? Your 5 Super Bowl rings aren’t good enough anymore? You’re now getting offended over a silly alcoholic beverage? That’s the surprising thing here. Usually when Philly fans whip out the ol’ #DallasSucks, Cowboys people react as if the Eagles aren’t worthy enough of a fight. They claim the Redskins or the Giants are the true worthy rivals. Well uno momento, por favor. Things get testy when you’re 2-3 trailing the 4-1 NFC East division leading future world champion and America’s Team the Philadelphia Eagles. Tough not having those Glory Hole years to hold onto anymore.

So you can have your fermented goat piss known as Eagles Tears, Dallas. Let us enjoy our early season happiness before it inevitably comes crashing to the ground in Hindenberg fashion. Everyone is happy right now. Just look at Pops rocking a Dallas Sucks beer and a granddaughter. His two favorite things. In that order.