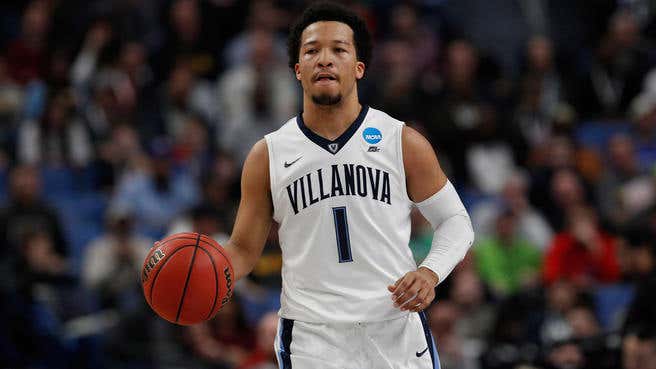 If you’re a college basketball junkie you’re getting cised knowing t practices have been going on and we’ve seen some teams already hold Midnight Madness, which truly signifies the start of the season. We’re less than a month away from real games being played and someone ranked high in these rankings losing an awful game.

So what better time to come out with the awards preview? We’ll take a look at All-American Teams, National Player of the Year and How the Hell Are They Still in College Team – otherwise known as the Robbie Hummel-Team.

I’m sure you’ll disagree with me, so let me know your picks on Twitter @barstoolreags

This is somewhat of a contrarian pick, because everyone seems to be taking Miles Bridges. There’s no doubt Bridges is the smart pick and a better talent than Brunson, but I’m going to somewhat off the radar just because it’s rarely the preseason pick that wins. To focus on Brunson, he was sneaky better than Josh Hart for a large chunk of Big East action last year. The question is was that due to Hart getting all the attention from defenses and/or being gassed or was it just the jump that everyone thought Brunson would make. Brunson is an old junior – not because of age but because of his game. He’s arguably the smartest player in the country, thanks in a large part to his father, Rick. Perhaps though the biggest sign of improvement last year is the fact he upped his free throw shooting percentage by 10 points, to 87.6%. That’s starting to become a good way to gauge shooting and a metric NBA scouts are looking at.

So let’s look at some more numbers as to my justification of picking Brunson as NPOY. Last year he was 45th in the country in ORtg, 69th in effective FG%, 23rd in true shooting % and 157th in assist rate. That’s a pretty good starting point for a guy who averaged 15/4 last year as a secondary – sometimes third option – depending on how much Kris Jenkins felt like shooting. His total overall offense was graded as excellent, where he scored 1.106 points per possession, which was good for the 95th percentile nationally. He’s also not a liability on defense, which is a huge selling point for me. He graded out in the 82nd percentile for overall defense.

We saw the jump he made last year when he was able to take control of the offense more since Arch graduated. This year he gets to be the go-to guy for a team that should win 30 games. Watching his film again from last year what jumps out is his footwork and strength at finishing. He’s a powerful guard who can play bully ball, absorb contact and finish in the lane. With his improved shooting, that makes him even more dangerous on the offensive side of the ball. Combine that with Villanova’s offense and it leaves Brunson in a lot of open space. He scored 1.357 points per possession in ISO sets and 1.006 PPP in PnR sets. That’s where you’re going to see him used quite a bit this year with Nova spacing teams out with their version of the death lineup. Watch these two plays against Xavier last year. Nova liked to do this, where they’d set a high ball screen to get a big switched on Brunson. From there they’d clear the side of the floor and just let him attack. Specifically watch his footwork as he sets the defender up with little jump cuts, similar to what you see from a running back.

Miles Bridges (Michigan State) – An absolute no-brainer when it comes to filling out your All-America teams is Miles Bridges. According to Sam Vecenie, Bridges is the only freshman in the 25 year history of sports-reference.com to put up 16 points, 8 rebounds, 2 assists and 1.5 blocks per game. Those are outrageous numbers. He’ll be used a couple different ways this year as Izzo can run him at the 3 or 4 spot depending what he wants his lineup to do. When he’s running the 4 spot it’s almost unfair at the college level. He’s too quick and athletic for other 4s and when he’s at the 3 he’s smart enough to look to post them up.

Angel Delgado (Seton Hall) – If Caleb Swanigan was a lock for All-America last year, Delgado should be this year. He’s a walking double-double, who is every bit of a rebounder Swanigan was last year. Delgado put up 15/13 last year, which means he should likely up that even more this year, so you’re looking at a 16/13 type year. He’s also a willing passer out of the post, averaging over 2 assists per game last year. To me he’s the best post player in the country this year.

Devonte’ Graham (Kansas) – Graham was ‘forced’ to play off the ball next to Frank Mason for three years. That changes as he now becomes the lead playmaker on a team that is projected to be one of the four best teams in the country. He’ll still have help to draw defenses away in Malik Newman and Svi, which will allow Graham the ability to shoot. He’s coming off a year where he averaged 13/4/3 playing alongside Mason and Jackson. Those numbers are going to skyrocket this year, along with the fact he’s one of the better defenders in the country.

Michael Porter Jr. (Missouri) – He’s going to have the chance to put up huge numbers due to the ball being in his hands. The 6’10” freshman is in the conversation for the No. 1 overall pick in the NBA Draft and he’s versatile enough to dominate games in a variety of ways. My fear with taking Porter here over the likes of a Trier/Bluiett/Colson is just how good is Missouri? This could be a Ben Simmons type situation where you put up great numbers on a below average team.

Allonzo Trier (Arizona) – I hope we get to see Trier for an entire season this year. He’s too good of a player for college basketball fans to be robbed of that. Last year he missed half the year due to suspension. As a freshman he missed a few games to injury. This year he’s coming into the year healthy and with arguably the best supporting cast in his three years. He’s going to be the go-to guy for Arizona as he was last year when he came back, even with a star in Lauri playing next to him.

Bonzie Colson (Notre Dame) – The dude just thrives in Mike Brey’s system. He’s a unique player considering he’s a 6’5″ post player but still put up 18 and 10 last year. This year, Brey will continue to run his offense through Colson and Farrell, letting Colson take advantage of mismatches in the high post. He’s an incredibly effective scorer as he shot 43% from the 3-point line last year.

Trevon Bluiett (Xavier) – There were two seasons for Bluiett last year. The first was his up and down regular season where he was bothered by a bum ankle. The second was the Big East Tournament and the NCAA Tournament where he legitimately looked like one of the five best players in the country. Mack likes to run him as the small-ball four spot, letting him take advantage of the mismatch with his ability to shoot the ball. If he’s healthy, I like him to be one of the best scorers in the country this year.

Joel Berry (UNC) – This is going to be Joel Berry’s team. There’s no other way to put it. UNC is going to be forced to play small-ball, something we’ve never seen before. So that means a lot of usage for Berry with him pressing the tempo and looking to attack off the bounce. Expect to see a lot of high ball screens with Luke Maye to run a pick-and-pop. We’ve seen Berry take over the leadership role and be the best guard for UNC the last two years.

Bruce Brown (Miami) – He’s one of those guys who people aren’t necessarily talking about, especially the casual fan. He’s a potential lottery pick this year and if Miami can get Lonnie Walker back healthy, there aren’t many better 1-2 punches in the country. He’s a 6’3″ combo guard about 12 points and 6 rebounds last year as a sophomore. If he can become a little bit more consistent shooting the ball, he has potential to be ACC Player of the Year.

Collin Sexton (Alabama) – He’s one of my favorite players in college basketball this year. He’s a 6’1″ guard that can just go get buckets as he’s one of the best scorers in this freshman class. I think you see Avery Johnson let the Tide play more uptempo with Sexton joining the team now to play alongside Avery Johnson Jr., giving them a couple of ball-handlers. Watch out for him in open space.

Mike Daum (South Dakota State) – If I told you he was the leading scorer to return to college basketball, would you believe me? What about if I told you he’s 6’9″ and shot 42 percent from three? He’s a legit NBA prospect who put up 25 and 8 last year for South Dakota State. He’s absolutely going to demolish teams in the Summit.

Jock Landale (St. Mary’s) – The second best true post player in the country is one that often gets overlooked. That’s largely due in part to him playing for St. Mary’s and on the west coast, but he’s one of the most efficient players in the country. Landale put up 17/9.5 last year while shooting 61% from the floor. He’s going to WCC Player of the Year.

Jevon Carter (West Virginia) – The reigning National Defensive Player of the Year, also turned out to be a pretty good offensive player. He upped his 3-point shooting last year to 39% and was the leading scorer at 13.5 per game. If he can continue to shoot like that he’ll push Graham for Big 12 POY.

Grayson Allen (Duke) – Yeah, I know. He’s Kmarko’s guy and he trips dudes. However, he’s still a really damn good basketball player. When he wasn’t bothered by turf toe last year, we saw the glimpses of why he was picked to be preseason National Player of the Year. With him moving back to his natural spot off the ball and a guy in Duval that can set him up, Allen is going to have a big year. All reports say he’s figured out the mental shit from last year.

How the Hell Are They Still in College Team:

This is something I’ve been doing as a joke for years and it’s sort of caught on. Those guys that you see pop up and wonder just how long they’ve been playing. People like to refer to this as Perry Ellis, but nay on that. The true legend of the how the hell are they still in college team is Scott Martin, who played at Notre Dame and Purdue from 2007-2013. That’s just outstanding. So without further ado this year’s squad: