So this theoretical trade has been floating around ever since the entire Giants receiving corps caught Broken Foot Disease on Sunday afternoon and the 5th L of the season was the final dagger stabbed into the heart of our dead, cuncelled saeson. Maybe it was out there before Sunday, but I’ve only seen it during the last 48 hours of misery. And it’s a fucked up trade. Because part of me sees the trade and feels like this

because there is a lot to like about it. First and foremost, this season is toast for the Giants. Anything short of the playoffs was going to be a failure. Now the entire season has been turned on its head and anything short of a Top 5 pick is the failure. If the Giants can lock up a high pick like everyone thought the Jets were going to do, they could go for a quarterback and hopefully move on to the next phase of the franchise. The Giants will be assured of that pick being pretty good if they downgrade from Eli Manning to Geno Smith or Davis Webb. Big Blue can also clear their cap of a massive contract as they get ready to pay Odell a huuuuge sum of money while also trying to piece together a line that hopefully keep the next quarterback upright while also trying to piece together an already pretty good team that should be a competitor as long as PEOPLE STOP BREAKING THEIR FUCKING ANKLES. Sorry about that, I had to vent.

The Jags have a ton of cap space and can absorb Eli’s cap hit while also no longer have to hold their breath about what Blake Bortles is going to do (this does not apply to London Blake Bortles who is a Hall of Famer). Eli The Game Manager gives the Jags a higher ceiling than Blake Bortles. Keeping Eli behind this offensive line with this receiving corps, especially with the next two games in Denver and against Seattle, with nothing truly on the line is almost criminal negligence. The Jaguars have been looking for a quarterback FOR-EV-ERRR (Squints voice) and it won’t be easy to find one with rings, durability, and talent (Eli’s been good when his team has been healthy). If the Eagles can get a first rounder for Sam fucking Bradford, why can’t the Giants get one for Eli Manning?

There’s also a lot to like about a trade with the Jaguars. Obviously you aren’t trading with a team like the Patriots or Packers that will likely have a pick at the end of the round. Even if the Jags continue to Jag Off all over the AFC South’s faces, they probably aren’t going to run away from the pack despite a real good pass defense and running back. The Jags or a team like them would be the perfect place for Giants fans to watch Eli finish his career. It’s not an NFC team they may see often in the regular season or anytime before the Super Bowl in the playoffs. Eli would be reunited with General Coughlin, which I have been waiting for that to happen since Coughlin was on his way out of town two seasons ago.

You would not only be putting Eli on a team that is pretty good with a person in the front office that loves him, but you would also be putting him with the most handsome NFL fan on the planet. 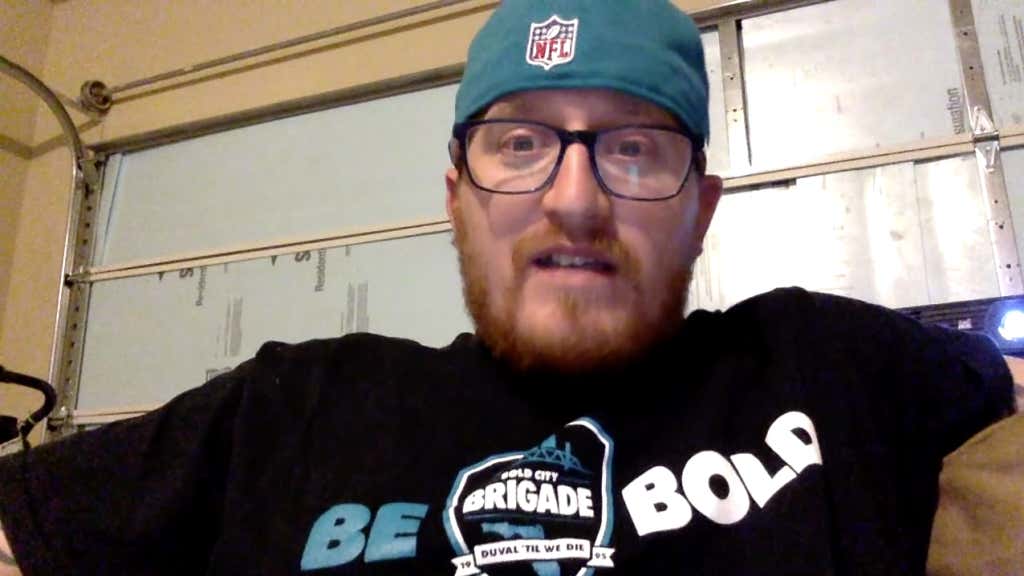 The most electric NFL fan on the planet.

A place where Eli can show off his dad bod.

And with the best coach in the Barstool NFL Video Game Franchise League. 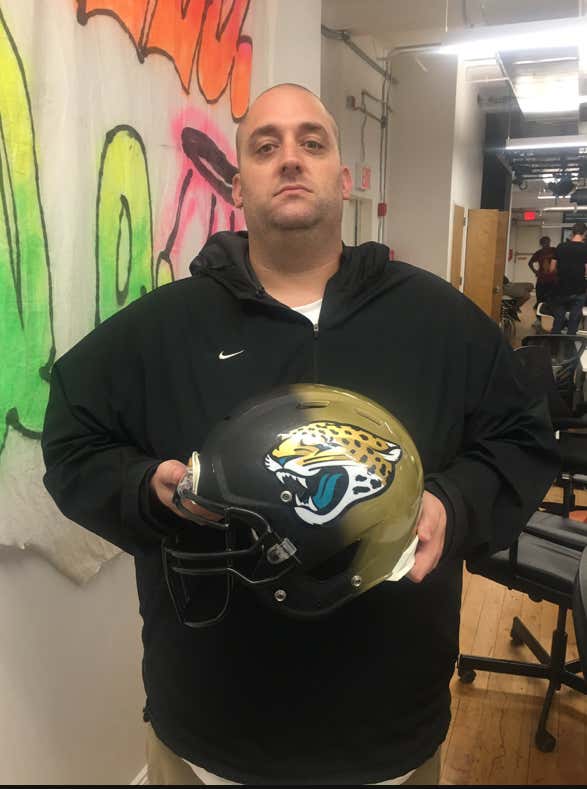 HOWEVAHHHHH, Eli Manning is our guy. As is custom for any real or potential Giants move, I put the Giants player on the move in another team’s jersey in Madden. 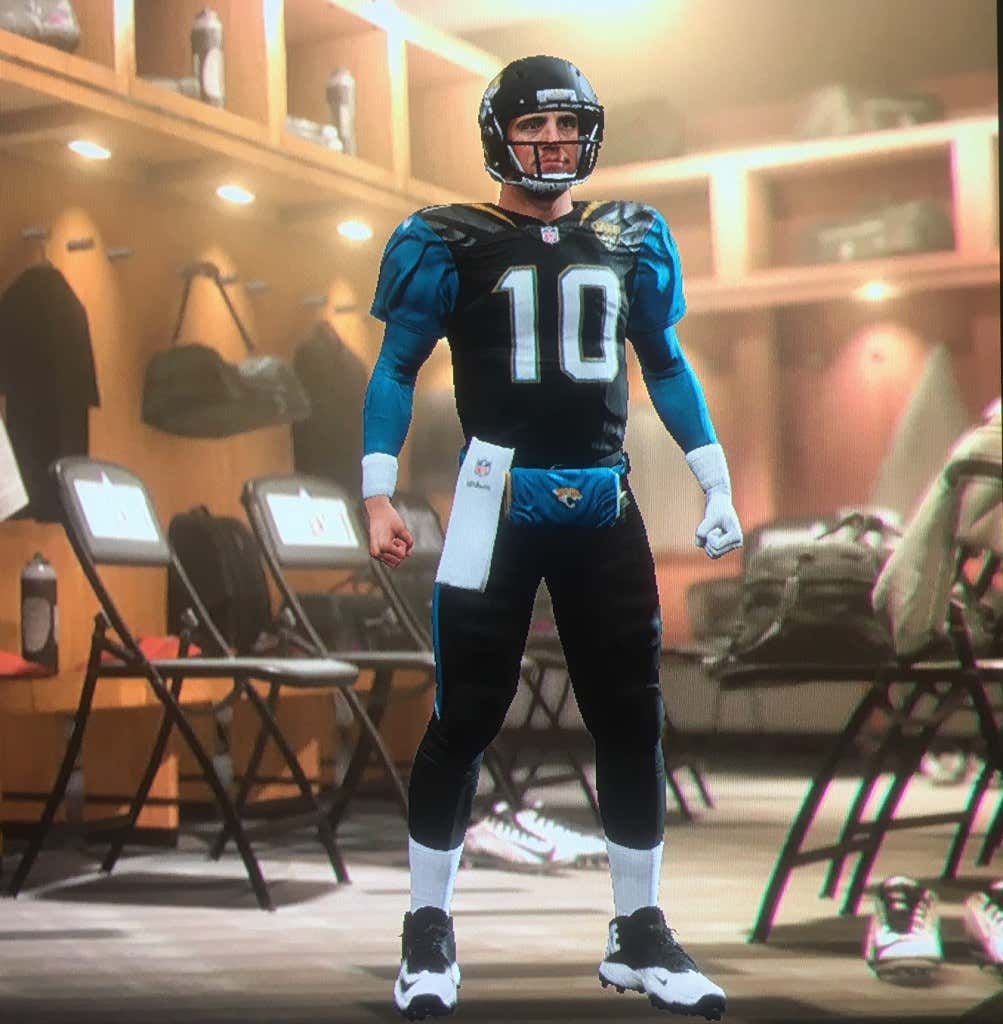 Yeah he makes terrible throws and stupid faces, and every non-Giants fan clowns him the millisecond something goes wrong. But that only makes us Giants fans love him more because the haters willfully choose to ignore his durability, where he stands on different all-time lists, and the fact he is the only person to defeat the greatest coach AND quarterback in the Super Bowl. And he did it twice. This gif somehow captures the entire span of Eli’s NFL career in 5 seconds.

Eli has shown up every week since he got the job and usually kept the Giants in contention. There is also a chance that some free agent spending and a bunch of high draft picks (including hopefully a stud offensive lineman) could make this team as good as we all hoped it would be. In the end, this is all just a crazy hypothetical trade with a 0.01% chance of actually happening. Instead I imagine we keep Eli until his career runs out and then count down the days until he makes the Hall of Fame, which will cause the internet to explode with outrage and hatred as Giants fans recite where he is on the all-time lists as well as those two rings.