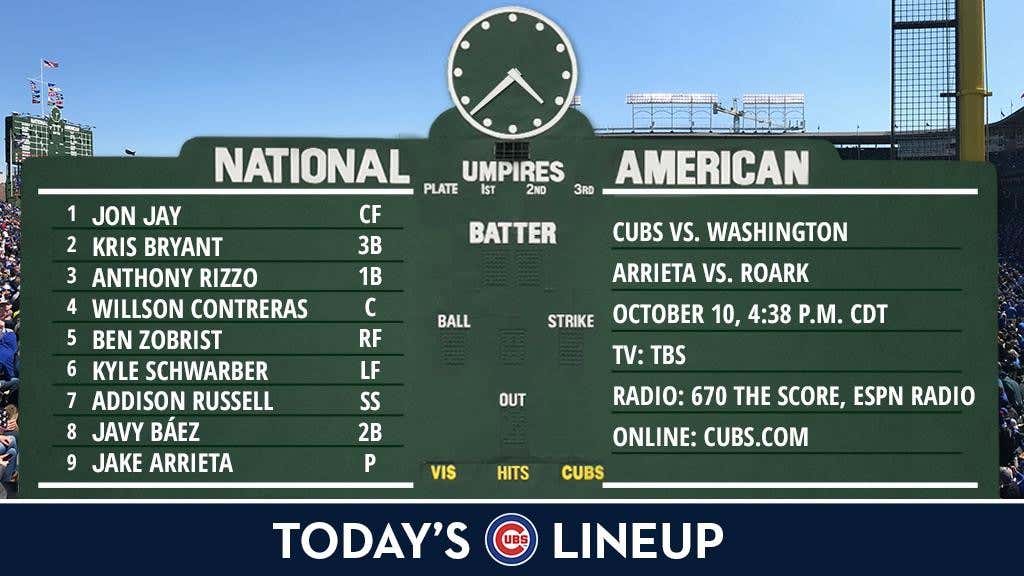 I’ll be updating this prior to Game 4 on Tuesday and Wednesday. Follow me on twitter to play along and send some questions. Thanks.

Two shoutouts before we get going here:

1. Section 242 yesterday killed it at Wrigley. I don’t want to put all the credit on 242 for winning that game but you know we brought some serious heat and that’s what counts in October.

2. Chief updated my Live Blog about a dozen times yesterday while I bombed him with text messages about the game. I’m committed to doing these live blogs but also committed to free playoff tickets so you can imagine my catch 22. Fortunately there are guys on the internet and friends in real life just like Chief which make both things happen. So thank you Chief.

Also, it’s supposed to rain quite a bit today. I hate rain on baseball days but I suppose theres time to talk about Strasburg vs. Roark. After all, if the game is postponed today, that means Strasburg pitches Game 4 right?

My simple answer is YES DEAR GOD SEND HIM TO THE MOUND. I hate Strasburg. I think he’s weak and broken, and I think that the Cubs benefit from seeing him two times in the last 4 business days. He doesn’t have what it takes to bounce back and give Washington the game they need to make this a 5 game series. Granted, I am biased towards the fact that Tanner Roark and I are close friends and former teammates. But that doesn’t change the fact that he’s got balls and Strasburg doesn’t. And at this time in the year, given that Strasburg already pitched AND LOST (even though he didn’t “deserve” to lose) will work so much in favor of the Cubs. That’s why I’d be more hesitant to see Roark in an elimination game. So if the game gets postponed, and the Nats go to Strasburg tomorrow, let me be clear in saying that is fantastic news.

We are still scheduled to play ball although some folks disagree. The chances are about 20% according to some smart weather folks. Personally I hope they play the game tonight while the momentum at Wrigley still lingers from yesterday. I want that place rocking and the boys ready to put their feet down not National throat. This is what it’s all about, and asking the Cubs to wait would be like making a kid wait to open Christmas presents on the 26th. It’s just a different energy at atmosphere.

That said, if it’s going to rain just do it now and open the skies God. Don’t fuck with me until 11pm showers. Hit me with the big stuff and hit me early. My emotions can’t handle your wrath.

By now I’m sure you’ve heard but the game is postponed until tomorrow at 3pm CST. Great news for those of us who don’t have to be at sales meetings at 3pm CST. I am working on an excuse to bail as I type but if we’re being honest (we always are in my blogs) there’s an overwhelming chance I just ghost that bitch and see you guys here. Time will tell. For now, I’m salty on being rained out as we all are. But at least I’m not really really upset which was on the table 2.5 hours ago if this game got played. Instead I’m waiting for tomorrow. There’s the least amount of silver lining I can muster.

As for starting pitching, I think the entire world is sleeping on Tanner Roark while Cubs twitter laughs itself to the NLCS already. Uhhhhh newsflash guys, Stephen Strasburg is not ready for a game 4 at Wrigley. I’m willing to bet that soft cocksucker didn’t even pack a pair of spikes for the trip. He’s the biggest wet blanket MLB has to offer and boy is he fucking WET.

Roark is my buddy and shit and yeah I hope personally this is a good experience blah blah blah but let me just say I do not love the fact he is opposite the Cubs in an elimination game. We’re talking about a guy with balls the size of my head and the competitive nature of a large coked out grizzly bear surrounded by other, lesser-coked-out grizzly bears trying to get some grizzly bear pussy. In other words, he will be at his absolute best, which can be pretty fucking good. I’m not saying he rolls through the Cubs I’m just saying don’t sleep on the fucking guy because he’s going to pitch his balls off and that should mean a close game.

I hope everyone got their beauty rest last night because win or lose sleep will be hard to come by tonight. I can’t say it enough – this is what it’s all about. I love waking up with the opportunity to advance in postseason play. It makes me feel all competitive and shit. Like I am seriously walking around town like it’s homecoming week 2003. Brother Rice vs. Providence under the lights for the pride of Mother McCauley. That’s the last time I had these kinds of chills.

That said we have about 7 hours before first pitch and I’m really starting to feel good about this game 3 matchup. Rumor has it the Nats had to trade out hotels and I love that inconvenience. I also love the road team sitting around for an extra day not really having shit to do vs. the Cubs being at home with their kids and wives and their own crapper and all that stuff. Little things make a difference and that’s a little thing. Also, MOLD! Can you believe that shit? Mold. It’s fucking mold season here in Chicago. Nevermind the crippling gun violence and blatant corruption. Chicago has a mold problem and I’ll be damned if we don’t address it. MOLD!

Someone else. Lackey shouldn’t see the mound this series unless the Cubs have a commanding lead and even then I just think it’s best he doesn’t pitch. That’s a combination of gut instinct and my brain working together too so trust me on this one. Lackey should stay in the clubhouse. He’s done his job.

Outside of Lackey, I honestly don’t know what the Cubs would do if Arrieta can’t get out of the 3rd inning. That actually might mean we see Lackey but I just find that very hard given the stakes. Arrieta has been here before plenty of times and I think you’re going to see a well pitched game on both sides. Maybe not a pitcher’s duel per se (that felt good) but more just two guys grinding it out with fastball command.

Rizzo or Javy. I’d be jealous of both for completely different reasons. Rizzo for having the world in the cusp of his hand and being the most likable guy on the planet. And Javy for being so ridiculously over the top cocky that I’d probably loathe everything about him. The fan love too would be hard to handle. But I get to watch him everyday so I know that Javy plays this game as hard as anyone in the league. He’s amazing in every application of the word amazing.

I don’t understand Joe Maddon. I know that’s part of the schtick but I like sincerely do not understand this man at all. One inning he’s subbing out Quintana for Strop the next he is giving CJ Edwards a clean look at 1-2-3 in the 8th. He wants to be involved, but not overbearing. Like he’s comfortable shaking things up in the 6th inning but couldn’t give us a look at Wade Davis in the 8th of Game 2? Does he have a bullpen g-code? I don’t think so. I think it’s just whichever way the wind blows provided he has an obscure statistic to back it up at the press conference. We liked his launch angle on Stropy’s split finger and when you see that you just go with it and so thats what we did. We went with it. – Joe Maddon, maybe.

To be fair, he doesn’t have a lot of options to get creative. Wade Davis is reliable. CJ can be filthy. Monty can work against lefties and righties. Strop has a slider. But really that’s it and, outside of Wade, everyone knows these 3 are subject to explode at any moment. So I also want to put some of this on Theo & Co. but not a lot because it’s still early. I just wish there was a better acquisition than Justin Wilson because he fucking stinks.

If we don’t that’s a good thing. If we do, hopefully it’s tonight in a Cubs blowout or worst case scenario extra innings. I don’t know Just Wilson personally, but I’d be surprised if he would have real confidence in an October appearance. Maybe he does. Idk. All I know is that he throws 98 from the left side and it’s a damn shame he doesn’t command his fastball more. Because let there be no doubt this guy has monster strikeout stuff and could be a big time asset. He just tends to fall behind 1-0 and 2-0 and then tends to throw 98 down the middle of the plate and we can’t take those risks in close October baseball games.

He spells it with a P-H you tell me.