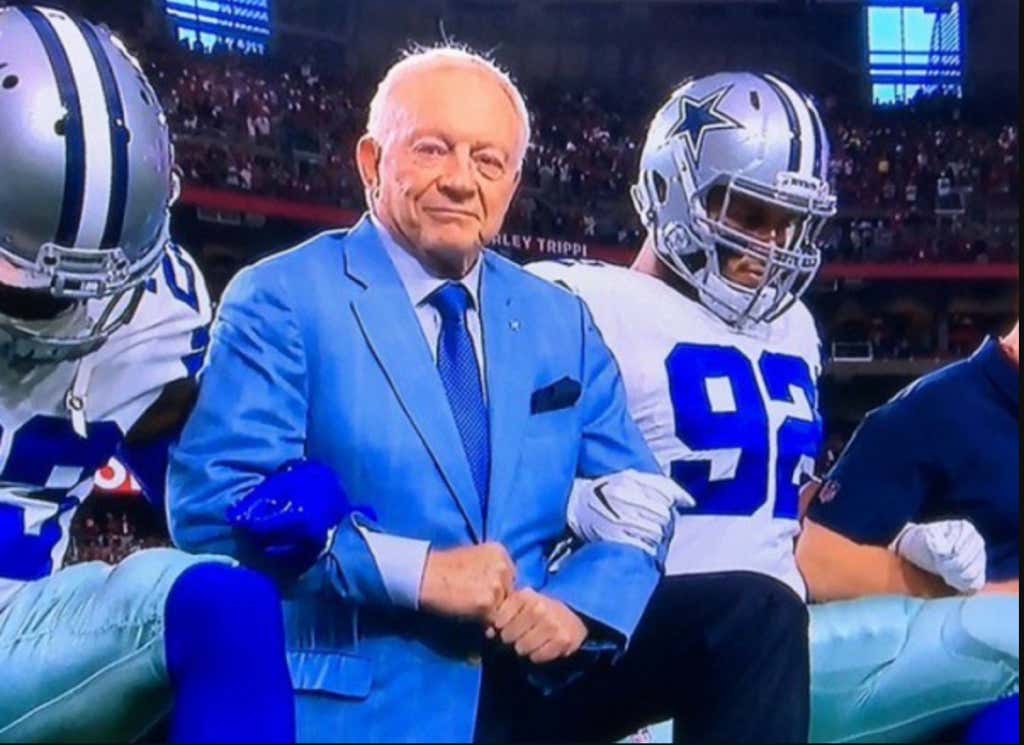 Jones’ comments, the strongest made on the anthem controversy, came after he was asked about Vice President Mike Pence leaving the game in Indianapolis early after several San Francisco 49ers players took a knee during the national anthem.

“I know this, we cannot … in the NFL in any way give the implication that we tolerate disrespecting the flag,” he said following the Cowboys’ 35-31 loss to the Green Bay Packers. “We know that there is a serious debate in this country about those issues, but there is no question in my mind that the National Football League and the Dallas Cowboys are going to stand up for the flag. So we’re clear.”

I’ve made a conscious lifestyle choice to not touch politics in my blogs but I figured somebody should at least mention the biggest story in sports today.  Jerry Jones with the power ultimatum:  stand for the anthem, or sit for the game.  Politics-wise I’m sure this will ignite the same debate we’ve been seeing for a month, (spoiler alert – you’re not going to change anyone on the other side’s mind.)  Can’t wait to read the takes.

From a sports standpoint though this is fascinating.  What does Jerry do if Dak, Zeke and Dez all decide to kneel for the anthem?  What if the entire team does it?  Will Jerry really forfeit a game?  Will he bench his star players?  Is that something he’s prepared to follow through on?  Will we see the first ever NFL game unable to be played because of protest?

Jones said he wasn’t aware of whether any of his players had raised a fist at the end of the anthem before the Green Bay game.

Genuinely hope this happens – not because of any sort of stance on the issues, but because I am desperately curious to see how this gets handled.

It also brought out the most obvious comparison right away –

Me, I’m a little too woke to this one.   Pretty clear false flag operation being run by a guy who is sick of standing up for his coach and his team after a massive choke job.  What’s everyone talking about today, the Cowboys inexplicably leaving so much time on the clock for Aaron Rodgers and blowing the game?

Jerry does it again.