CFT - College football is simply the best. Example No. 18, 485? In the first overtime of Western Michigan’s wild MACtion romp with Buffalo, tight end Donnie Ernsberger scored on a 14-yard touchdown pass that, with the successful extra point, sent the game into a second overtime. What made this post-worthy is the fact that, apparently, Ernsberger’s sister came onto the field during the game to give her brother a celebratory hug.

139 points and 68 points from a losing team both FBS records.

You’d think that would be the best story from any game right?

Wrong.  This is Maction. 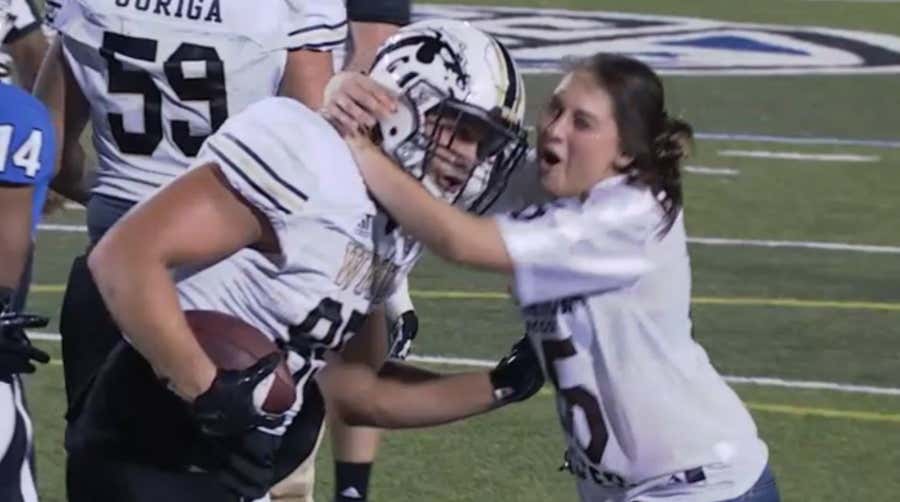 Tight end Donnie Ernsberger’s sister just sprinting across the field to give him a big hug for his touchdown…in the middle of the game.   They say it’s family, football and God, well the first two have never been more clearly represented on the gridiron.

How about the cops escorting her out?  I thought this was America? 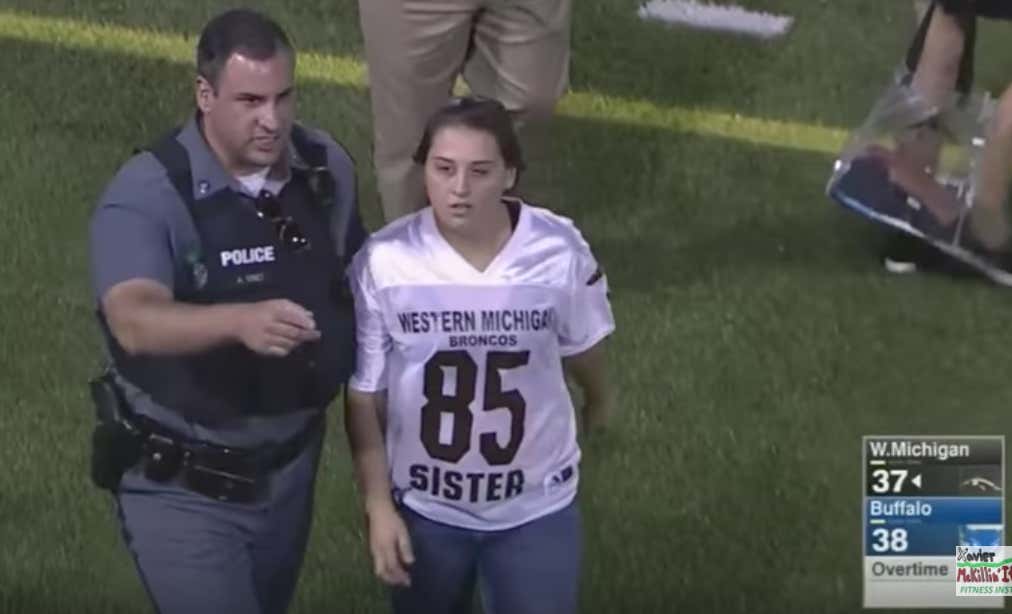 Anyway, this was her reasoning:

It was hard for any one individual to steal the show in Saturday’s seven-overtime football game between the University at Buffalo and Western Michigan University at UB Stadium.

But the exuberance of Shalene Ernsberger, older sister of Western Michigan’s senior tight end Donnie Ernsberger, has gone viral after the first seven-overtime game in the NCAA since 2006.

When her brother scored on a 14-yard pass from quarterback Jon Wassink in the first overtime, he was greeted by his teammates. Suddenly, Shalene appeared on the field, wearing a jersey with Donnie’s No. 85. She threw her arms around her brother’s neck and hugged him. Donnie was surprised and bewildered. So was security.

“She thought the game was ended by my touchdown,” Donnie Ernsberger told The News on Sunday. [Buffalo News]

In all the excitement, Shalene was on the field before security at UB Stadium could react. She was escorted from the field and the stadium, but not arrested and no charges will be filed, a UB spokesman said.

Western Michigan was penalized 15 yards for unsportsmanlike conduct, though Ernsberger and his teammates argued in vain that they had no control over the actions of a spectator. He casually tossed the ball to an official after the embrace.

“All my teammates and coaches were just trying to explain to the refs that it wasn’t a penalty because it’s uncontrollable by us,” he said. “Afterward they laughed about it and were still happy and ready to go for the next overtime.”