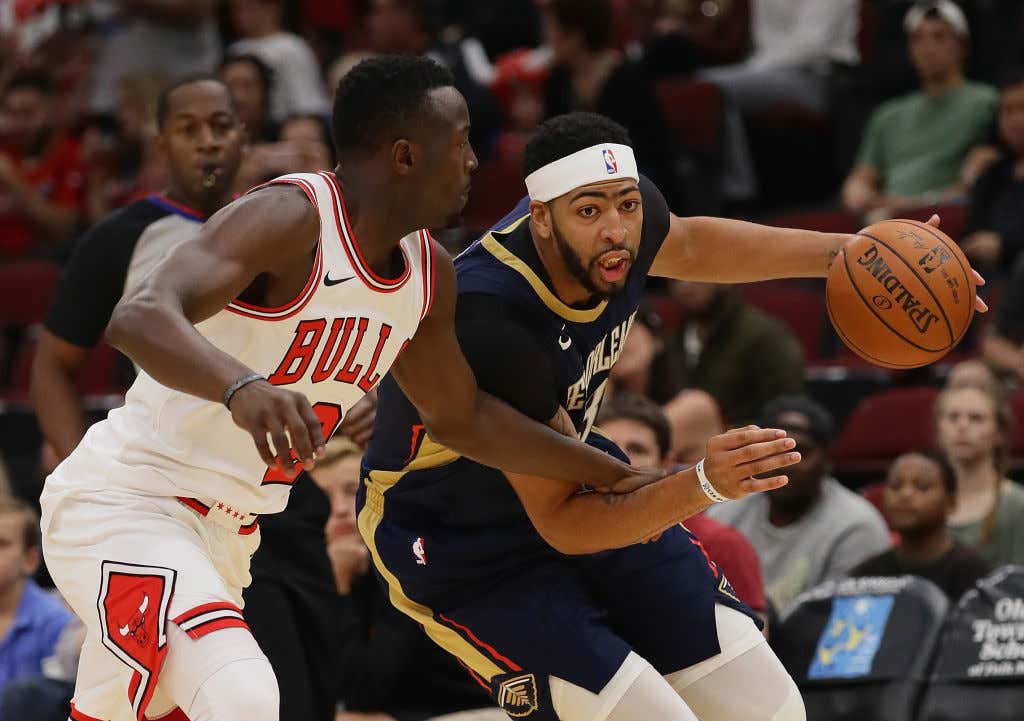 Happy Monday! Welcome to another edition of Last Night In The NBA. Chances are you were busy watching football yesterday and I’m sorry to tell you but you missed some pretty good basketball. Fortunately for you, I’m here to catch you up on everything you may have missed. There were 7 total games last night, here’s what went down

Some might say this should have been the ECF matchup last year. In this matchup, The Wizards played their whole roster (starters played essentially one shift), CLE sat pretty much everyone, and WSH moved to 3-0 so far this preseason. Just because the result wasn’t a surprise, doesn’t mean there weren’t some beautiful plays from both sides. For example, Bradley Beal

and this beautiful ATO from Brooks

For CLE, I mean it was the Jeff Green show. No, that is not a typo, it is in fact a real thing that happened

That 19/7 is something Green’s agents will probably show teams for the rest of time. Ultimate “what if” type potential player. So frustrating.

Sure it may be just a litter nerve wracking every OKC starter played at least 26 minutes, and the Thunder just squeaked out the victory against a team from Australia led by Josh Boone and Casper Ware.

But the game was really saved by Josh Huestis who had 4 blocks, including two key blocks late to help seal the win

No surprise here, the Blazers backcourt went bananas. 55 points from Dame/CJ on 15-30 shooting (8-16 from deep)

these two look ready for the season. It certainly helps when as a team you shoot 52.9% and take 38 FTs, but they also got solid contribution from their bench between Mo Harkless (16 points) and rookie Zach Collins (12 points). Harkless also went 2-2 from deep which is hilarious because if you remember from this past season, he refused to shoot a three over his last few games so he wouldn’t lose out on his performance bonus.

But most impressive play from this game? You could argue this dunk by Archie Goodwin

For the Clippers, Blake led the way with 15/4/6, and I’ll have you know he’s shooting 50% from three over his last two games. He’s looked pretty good so far this preseason recovering from his foot injury, but he did have 5 TOs in this game. DJ did his thing with a 12/14, but really all LAC did was miss shots and turn it over all while not playing defense. Terrible strategy imo.

If you’re a Nuggets fan, there are still some positives to take away from this game, despite getting your dick kicked in. For example, your two young franchise cornerstones actually played pretty well against SA. Gary Harris, fresh of his big time extension had 15/3 on 7-12 shooting, and Jokic a respectable 19/7/4 on 7-13.

The bad news, and the thing that basically the entire Nuggets season comes down to, was they could not play even a lick of defense. The Spurs had 57/57% splits and made 16 threes.

Bryan Forbes came out of nowhere to drop 20 points of his own, and Resident Spurs Draft Steal Dejounte Murray had the dunk of the game

I still think the Nuggets are going to surprise some people, their offense is too fucking good to miss the playoffs again, but man, just the smallest bit of defense would make a world of difference.

No bid deal, just a modest 37/15/3/3 for Anthony Davis, reminding everyone what a damn shame it’s going to be to watch him suffer on NO this year. He wasn’t alone, Boogie threw in a 22/9/9 of his own, and the Pelicans got their first win of the preseason.

It certainly helps that AD went 22-23 from the line, but their offense continues to be so intriguing to me. Two inside/outside bigs who can rebound and protect the rim, but also stretch out and hit the three. You can run P&R with either, you can run a post offense through either. I think we all were curious how this would work, and even though they aren’t winning games, both seem to gel playing next to each other.

Even though his two teammates will get most of the shine, point guard Jrue Holiday was solid as well, with 19/5/3/3/2 on 8-12 shooting.

For Chicago, it was the other Holiday brother that made an impact

and you know me, you know I’m a slut for good ball movement

With back to back wins over the Knicks, it’s clear, the Nets are the best NBA team in NYC. I mean the ball movement was gorgeous

Allen Crabbe was solid in his Nets debut (14 points)

and Russell had his best game as a Net with a solid 16/3/7/3 on 7-14 shooting. Remember, offense was never a problem with the Nets, so while 117 is a little high for them, I was more impressed with their defense only giving up 83 points and holding Porzingis relatively quiet.

The Knicks wouldn’t go quietly though, this sequence was pretty fucking legit

Was this a NBA preseason game or a college game? Did they play just three quarters or something? Yikes. The Lakers were very close to blowing what was a nice first half lead, but then that bastard Kyle Kuzma continued to save the day for LA. What an asshole

Julius Randle was also impressive, with 17/10/3/3 in his 28 minutes and they needed every point these two guys gave, because Ingram was nowhere to be found (1-6) and Larry Nance Jr had just 4 points.

For the Kings, while he only scored once, this move by De’Aaron Fox is a little preview of what he’s capable of. That is some inside out move at a crazy speed and a strong finish at the rim

The Kings also had a throwback performance from Zbo, who led all Kings with 16 points on 7-15 shooting

And much like Fox, Buddy Hield struggled from the field, but the two he did make sure were pretty

But at the end of the day, having 31/28% splits for the game is going to kill you every time.

And that should bring you all up to speed on everything that happened last night in the NBA. You’re welcome, don’t mention it. There are 8 more games on tonight, so make sure you check back tomorrow for anything you may have missed!