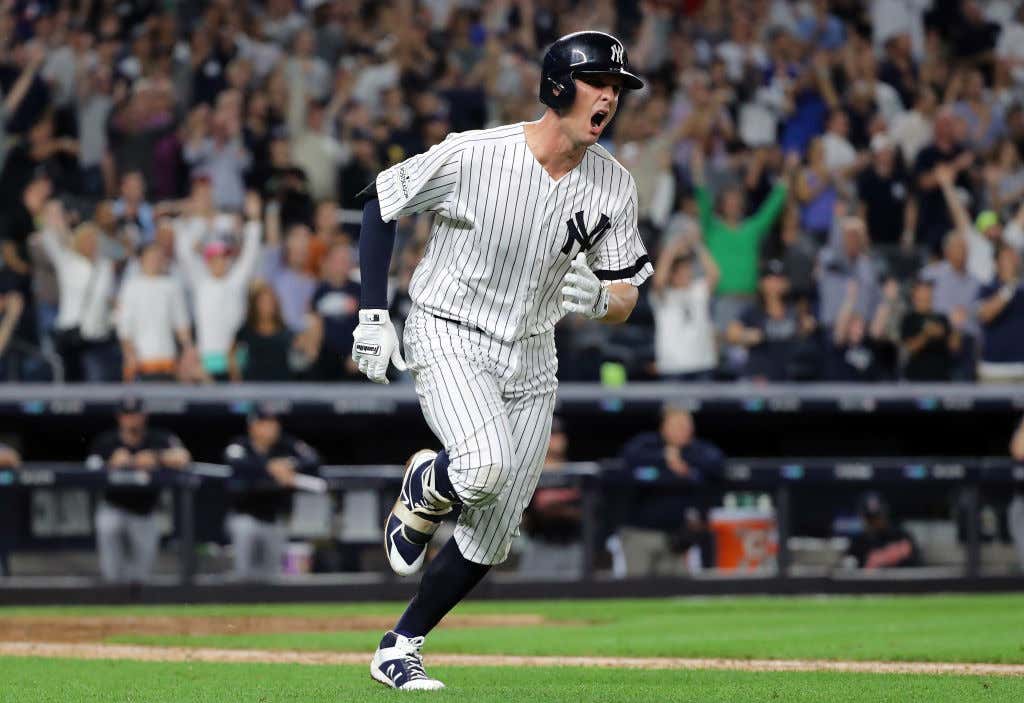 Masahiro Tanaka. Last night he earned all the big bucks. It’s been a tough fucking year for the Asian Sensation, but last night he was nails. Last night he was spectacular. Last night he went toe to toe with the best team in baseball and puts up seven goose eggs. No one can ever say a bad word about that man ever again. If he opts in, or if he opts out I don’t care. That was big time pitching in a do or die game. In a postseason where frankly no starter is going deep into games, Tanaka showed everyone what he was capable of. From start to finish his splitter was sinking as low as it could go, getting a ton of swings and misses. For a while though, it appeared the Yankees offense would continue to put up zeroes themselves. It was only a matter of time before Cleveland’s lineup ran into one ball. Frankie Lindor did that in the 6th, Aaron Judge (who booted a ball earlier in the game) would have none of it.

That robbery not only cock blocked the shit outta foul ball guy, but it gave new life to the Yankees.

Foul ball guy. What a bitch. I would’ve contemplated murdering his entire blood line if he pulled a Jeffrey Maier. Luckily he did not, and Judge saved the day.

In the 7th inning, Greg Bird put the Yankees ahead with this titanic blast. It was a fucking moon shot.

Bird has had a tough road to get back to being the every day first baseman with his constant foot problems. Surgery after surgery, set back after setback, all to have that moment. Greg Bird saved the Yankees season.

After Tanaka went seven strong Girardi went to Robertson for one out LOL. Sweet gameplan Joe. That meant it was time for Aroldis Chapman for FIVE OUTS. His 8th inning was smooth but the 9th was terrible for my heart. Kipnis singled and Jose Ramirez reached on an infield single. Chapman got Bruce to strike out and fought Carlos Santana in a hell of a battle, eventually winning, getting him to fly out to left. When that ball left the bat I didn’t know what to think, but we’re living to fight another day.

That day is today and it’s time for Luis Severino to redeem himself for his Wild Card shit storm. I need Sevy breathing fucking fire tonight. Big time W yesterday, I almost didn’t make it through the 9th. Thank God for KFC.

P.S. Almost forgot about these assholes

With no exaggeration do I say these people should have been thrown off the balcony. It takes a special type of asshole to bring that sign to the Bronx in a do or die playoff game. Light them and their sign on fire