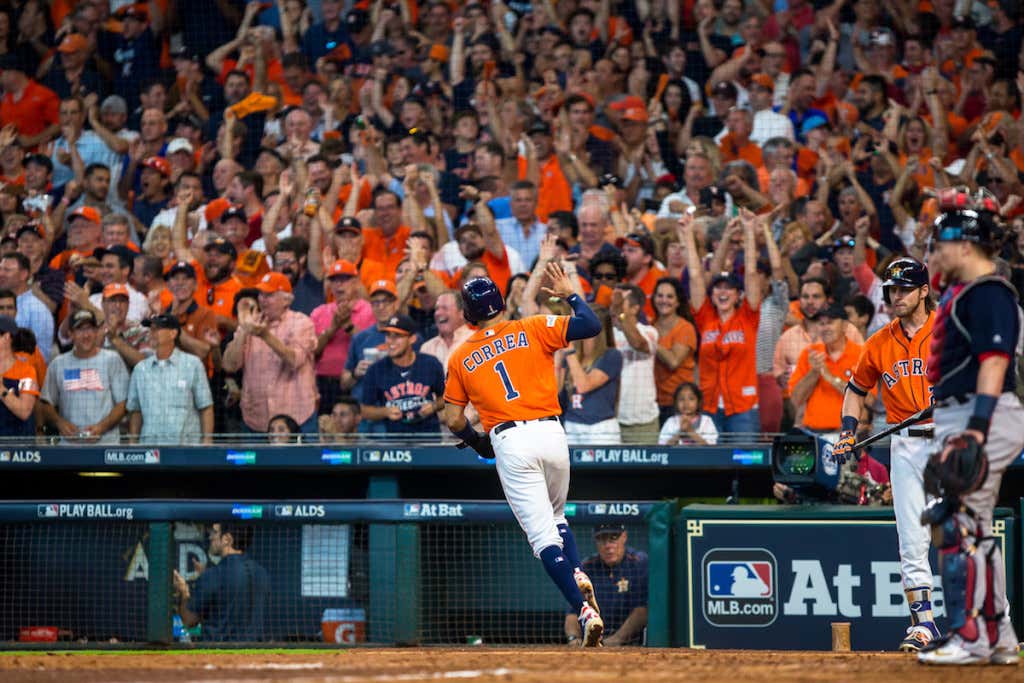 Not that my expectations prior to this series were high or anything. In fact, they were actually quite low. I just wanted them to win a game. One game. Any game at all. Avoid a sweep. That’s where we’re at with this Red Sox team. It’s incredibly frustrating, because this was a team that was picked as a co-favorite to win the World Series coming into the season. Now, it’d just be nice to see them win one single postseason game. Any game. Pick one.

Well, now it has to be Game 3, because if they don’t win that game, then that’ll mark two years in a row that the Red Sox have won a division title and then gone on to get eviscerated in the Division Series by a team that was hungrier, more focused, and more talented than them. Last year was a little bit different, because the Indians were banged up and seemingly ripe for the picking, but I think Cleveland took great exception to being counted out for that very reason, and their response to that was felt immediately and resonated throughout the rest of their postseason run.

This year’s situation, although drawing a similar result, is not the same as last year for Boston. This year, the Red Sox just aren’t as good. Flat out, they are not as good of a baseball team as they were in 2016, and they’re also not nearly as good as the Houston Astros, the team that is now one game away from completing a three-game sweep, which, so far, has been an unmerciful ass-kicking.

When the Red Sox finished in last place in back-to-back years in 2014 and 2015, they put an emphasis on starting pitching by investing $217 million in David Price. When that plan resulted in zero postseason wins, they once again invested in starting pitching by unloading the farm for Chris Sale.

Not that you can pin Boston’s 0-5 record in the postseason over the last two years exclusively on those two guys, but this is more just to illustrate the point that for a team that’s invested so much in starting pitching, they sure haven’t gotten any when it counts the most. Those five consecutive postseason losses have all been started by five different pitchers — Clay Buchholz, Drew Pomeranz, Rick Porcello, Sale and Price. Combined, they have an ERA of 11.09 and a 1.98 WHIP. They’ve allowed 23 earned runs and nine home runs in their 18.2 innings of “work”, averaging three and two fucking thirds innings per start. It’s a joke.

I mean, God bless Dave Dombrowski for doing everything he could to take the Red Sox from a back-to-back last place team in 2015 to a perceived World Series contender in just one offseason and then again the following winter, but I don’t know what else this guy can do. If they get swept again, seriously, what the fuck else does he have to do to get ONE postseason win? Never mind winning a postseason series or a championship — we’re talking about just one fucking postseason victory. What’s he gotta do? We’re looking at a group that’s good enough to get there, and that’s about it, which is WILD to say about a team that’s being paid $200 million collectively.

The Red Sox offense isn’t off the hook, either, by the way. Good lord, these guys suck. Everyone wants to talk about juiced baseballs — did you even know that more home runs were hit in 2017 throughout the league than in any other year before, breaking the record from 2000, which was right in the heart of the Steroid Era? The Red Sox hit the fewest home runs in the American League this year and have zero this postseason, while allowing SIX in two games. They’re also averaging 2.20 runs per game since Game 1 of the ALDS last year, the fewest runs per game by any team in the postseason that’s played more than one game.

They’re throwing fucking bouncy balls at these hitters, and the Red Sox still can’t hit them over the fence or score any runs. Boston has a .619 team OPS over the last two years in the postseason, which is worse than every other team in the American League that’s played more than one playoff game. The Red Sox also have a .566 OPS as a team this postseason alone, and the average team OPS among all postseason teams this year is .783, just to give you an idea of how far off the Red Sox are from everyone else.

Looking at the first-round match-ups, on paper, it was pretty obvious why the Astros and Indians were favored in their respective series, but that was just on paper. Now we’re seeing it with our own eyes. And to the Yankee fans who were chirping last night that at least their team is putting up a fight in their series — you’re right. Although both teams are down 0-2, the Yankees have been much more fun to watch. They’ve at least been competitive. Or, at least they were in Game 2. As far as the Red Sox go, they haven’t held a lead in the postseason since Game 1 of last year’s ALDS. There’s literally been nothing to cheer for. Nothing at all.

The lone bright spot, if you can even call it that since he should be starting Game 3, has been David Price dominating out of the bullpen in Game 2. That’s really been it, and I’m not even really sure that qualifies as a moment that Red Sox fans could cheer for, because it was already 4-1 in favor of the Astros by the time he got in the game, which felt like 8-1, which is right about where the score ended up after Carlos Correa went off for a 4 RBI day thanks to more suckbag Red Sox pitching.

I feel like I’m watching the same movie all over again. The Red Sox head back to Fenway Park down 0-2, and playing the role of Clay Buchholz will be Doug Fister. And shit, the Red Sox might even win this game, because Fister has been one hell of a pitcher in the postseason throughout his career, owning a 2.60 ERA in 55.1 innings. And you know what else? The Astros have lost three straight games five times this season. Anything can happen, I guess. But the players in that Red Sox clubhouse have got to know that they’re overmatched. There’s no spark at all. What we’ve been watching over the last two days has been the conclusion of yet another year of uninspired postseason baseball under an uninspiring manager.

I’d imagine that if the Red Sox fail to pull off an incredibly improbable comeback, we’d have to see some major changes around here. They can’t keep trotting out the same group and hoping for results that have been any different from what they’ve gotten over the last two years in October. It’s embarrassing. Either they turn things around in Game 3, or I’m not exactly sure how the Red Sox could give it another shot with this core as they are currently assembled.