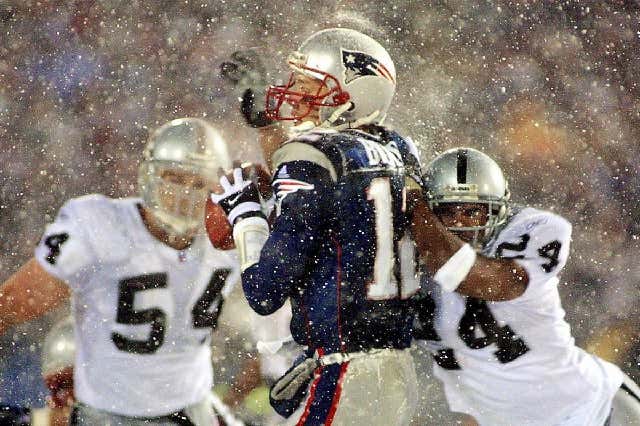 In case you’re one of the hundreds of millions of Americans who are cursed with mental health and regular day jobs, you probably went to bed once Jameis Winston wildly threw a Hail Mary in the direction of none of his own players and sealed the Thursday Night Football win for the Patriots.

If not, if you’re one of the deranged, obsessive few, you stayed up watching NFL Network’s Timeline: The Tuck Rule. An in-depth look at what Pats fans call “The Snow Bowl and Raiders fans call “The Tuck Rule Game” in that way that normal people call what happened from 1861-1865 “The Civil War” and backwards assholes call “The War of Northern Aggression.” Not to worry though if you missed it, because it’s re-airing Friday at 10 PM, so set your DVRs. You’re welcome.

Naturally the Raiders fan pages are not wasting the opportunity presented by the show to further bitch and moan about the call, 16 years after the fact:

For many Raiders fans, reliving that moment is the last thing they want to do. That’s understandable. The moment is held up as one of the NFLs greatest plays even though it should be one of its most shameful moments.

The only ‘play’ that was made was the one by Charles Woodson on the blitz to bat the ball out of Tom Brady’s hands where Greg Biekert recovered it. That ‘play’ was stolen from the Raiders and allowed the Patriots to kick a field goal to tie it and ultimately win* the game.

Had the fantastic play by Woodson and the Raiders’ defense stood as originally called, the Raiders could have kneeled out the clock for the win and Tom Brady and the Spygatriots’ dynasty* would have had to wait or may never have existed in the first place.

I doubt NFL Network will be delving much into any conspiracy theories. They are more like to worship at the altar of the Belichick and Brady.

Wrong again, you sad, pathetic, costumed little reprobates. NFL Films plays it pretty much down the middle. But what else could they do? Because as “controversial” as the Tuck Rule is said to be, it was a rule. It was properly applied in the playoff game, as it had been before. NFL Rule 3, Section 22, Article 2, Note 2:

“When [an offensive] player is holding the ball to pass it forward, any intentional forward movement of his arm starts a forward pass, even if the player loses possession of the ball as he is attempting to tuck it back toward his body.”

It’s a myth to say Walt Coleman made it up on the spot or that it had never been called before. In fact, here’s a clip of the Tuck Rule being called against the Patriots earlier in the 2001 season. But no one made a big deal out of it or remembered it because all that game is remembered for is Mo Lewis cracking Drew Bledsoe open like an egg an unleashing the dragon of Tom Brady upon the world. Pardon the weird lack of audio:

So the world can keep reliving this all they want. They can use the call in the Snow Bowl as just another example of the Pats getting all the breaks or even “cheating.” They can ignore how it only gave the Pats the ball 2nd & 10 from the Raiders’ 42 but Oakland couldn’t make a stop. Then how it was 4th & 9 from the 28 when Adam Vinatieri made the clutchest kick of all time. And how the Raiders couldn’t make a stop in sudden death. This is still America and they’re entitled to bellyache all they want. What they are not entitled to are their own facts. The Tuck Rule call was legitimate. Period. Then, and forever. The bunch they’ve still got in their panties doesn’t change that.