Pumpkin Spiced Szn has officially arrived! This story is absolutely incredible. There were some real life people in this school that thought some type of deadly gas was getting leaked in the high school like some nerve gas from “24” (RIP Edgar Styles)* and called for a full evacuation of the building. Could you imagine being the guy to realize this was a goddamn pumpkin spiced AIR FRESHENER and in fact not a harmful toxin? If I’m the teacher/principal who called for the emergency evacuation you have get the word out this was just a drill. He’ll never live this down otherwise. Just trying to keep everyone on their toes. You can’t go down being the guy who mistook pumpkin spiced for anthrax or nerve gas. That’s just not a good look. That guy goes down as a bumbling idiot for the rest of his tenure. He might even have to change school districts, maybe move his whole family out of Baltimore. His kids 100% better be all coming in with pumpkin spiced lattes the next day and the next and the next for the ultimate troll job.

My biggest takeaway here is what the fuck is going on with this person? 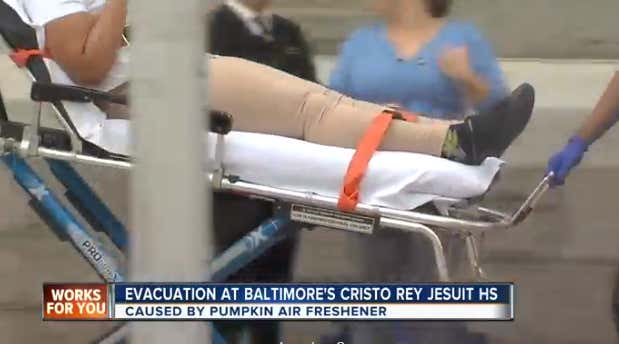 Why are you being STRETCHERED away? The only explanation was she had a test she didn’t study for and pretended she was infected with the deadly virus. That buys you 24-48 hours easily. We’ve all been there. Pretending you’re infected with nerve gas is a power move to get out of a Calculus test. You can only play that card once though. Same with the grandparents death. I may have told eight different teachers in college my grandparents died and I couldn’t get an essay in on time. My grandparents both died when I was 12.