The tank is on hold as the New York Jets have won two games in a row and get the 0-4 Cleveland Browns this weekend. IS THIS STUNNING? Not really, some out there looked at the schedule and saw a decent start being possible (hi, #14). This team was never going 0-16 or 1-15 as certain outlets predicted. It is hard to be that bad in the NFL and the Jets have roughly the same talent level they did last year, if not more talent, and that team went 5-11. On to your questions, thanks as always for tweeting them over… 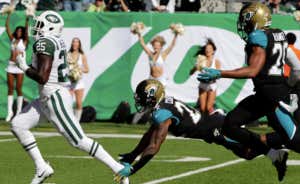 Do you think some of these new guys have a potential future here? Specifically ASJ, Ealy, and Claiborne?

Austin Seferian-Jenkins is a yes. He has all the physical attributes you look for in a starting tight end and appears to have turned a corner in his career this offseason. ASJ has looked lighter and quicker in his first games back, while showing more promise than expected as a blocker. There is a reason he was a second round pick. The same goes for Kony Ealy, who is also a previous second round pick and has looked rejuvenated in New York and will have a role that will only grow if the Jets move on from Muhammad Wilkerson this offseason. Morris Claiborne is a tougher call. He is solid when healthy but he is very rarely healthy. I would be hesitant to invest big, long term money in him.

When can we expect to see Stewart take over for Kerley. And eta of legget ?

I know some fans are incredibly excited about Jeremy Kerley’s 95 yards on 13 catches but neither him nor Jermaine Kearse are going to be key pieces of a contending team long term. They drafted ArDarius Stewart for a reason. This is the type of season to play him in and the same goes for Chad Hansen. Leggett has more of an uphill climb because he has been hurt and is behind two other young players: ASJ and Eric Tomlinson, who is a good blocker.

Give us your top prospects at each of the jets top needs.

The Jets biggest need is quarterback and all the usual suspects should be under consideration: Sam Darnold, Josh Rosen, Lamar Jackson, Luke Falk, Baker Mayfield, Josh Allen…hell, draft two quarterbacks. Just figure the position out. Their other big needs are outside linebacker/pass rusher, cornerback and inside linebacker. A few names to watch at those positions could be: Arden Key, Harold Landry, Sam Hubbard, Iman Marshall, Kevin Toliver, and Malik Jefferson.

I know it’s not fair to judge Morton off of the progress of Hack and Petty, but would you trust him to develop our future QB?

It is basically impossible to say at this point. The shortcomings of Petty and Hackenberg are certainly not Morton’s fault but I also wouldn’t draft a player under the assumption that “John Morton is going to fix and develop him!” This was the problem with the Hackenberg pick, they drafted a guy who stunk in college and had the hubris to think they could fix him. Just a draft a quarterback who does not need to be fixed or need substantial development. No player is perfect but do not count on your coach to “save” anybody.

Which week do u predict the qb switch will occur

On the current rate we are headed? After the bye week (week 11). There is always a chance McCown could get hurt before that or the bottom could fall out with New England and Atlanta over the course of three weeks but I don’t think this coaching staff is anxious to make a change right now.

Should we be mad when the Giants and Dolphins take Darnold and Rosen 1 and 2 when we’re sitying at pick 8 after a 5 win season?

Vin is out here to ruin everybody’s weekend. I EXPECT the 5 win Jets season, that is why I picked them to go 5-11. I am mentally ready for the 6th or 7th pick in the draft (a defensive lineman???). The good news on your question is despite the Giants best TANK efforts, they are going to eventually win some games and probably join the Jets around 5-6 wins. If the Dolphins bench Jay Cutler, they will get back on track as well.

The Jets cannot pay Brees big money at his age. Alex Smith is off to a hot start but there is a ceiling to the type of team he leads, particularly if the offense isn’t perfectly built around him like Andy Reid has done. Bradford is not reliable at all. I am a bigger fan than most of Taylor and think he is an above average starter but if Buffalo goes 9-7  or 10-6 this year, are they really moving on from him?