The Ringer- Jerry Rice does not mean to do it. After all, it’s not about him. “I just want to go up to the bride and the groom and congratulate them,” Rice said. “Tell them, ‘Today is your day.’” Those intentions are great and all, but when Jerry Rice crashes a wedding, the story of that wedding becomes, “Uh, Jerry Rice crashed our wedding.” “For some reason, it always turns out that they are so excited,” Rice said. “They want to take pictures, and I’m just happy to take pictures with them. It always turns out to be bigger than that.”

“It’s so exciting to see their reaction. It’s usually, ‘Oh my god, I never thought I’d run into Jerry Rice on my wedding day,’” Rice said.

If you’re wondering if Rice does this every Saturday and Sunday, he does not. “Sometimes there are weddings on Friday, too,” he said. He estimates that he crashes at least one wedding per weekend. “I’ve had some brides that start crying,” Rice said. “I tell them, ‘You’re not supposed to be crying for me. Your groom is a different story.’” Restani said that the wedding planner at their venue has an album full of photos of Rice at various wedding parties. (The venue declined to comment.) Rice doesn’t know the first time he crashed a wedding, but it started sometime after he retired from the NFL in 2006. “I’ve done it so many times,” he said.

Look, I love Jerry Rice. I think most NFL fans do. But that is a WEIRD ass move. Whenever there is a conversation about which athlete was better or cooler, the modern athlete inevitably gets points taken away because of something he did on social media or got caught doing because everyone has a cell phone that can record in HD at any given moment. The older players are always the “classy” ones or the ones that stayed out of trouble (except for you, LT). But this story proves that old school athletes are just as weird, if not more so, than today’s athletes.

Don’t get me wrong though, I respect the hell out of this move. I imagine there’s nothing better than showing up to a wedding, getting your dick at the very least proverbially sucked by a bunch of 9ers fans, busting a move on the dance floor, and getting a free cut of filet mignon along with unlimited top shelf liquor for your troubles. I would love if Jerry Rice showed up to a wedding I was at, even though there is a real chance he could be a crazy freeloader like Carl Weathers.

Also this quote cracked me the fuck up.

“The bride is not always into football, so they might not be up on who I am, and I’m in their bridal suite,” Rice said. “They give me this staredown like who the hell is this guy? But once everything registers, it blows them away.”

Can you imagine a bride in her bridal suite with all her girlfriends slugging champagne and giggling about their college days as Jerry Rice just stands in the corner shoving pigs in a blanket three at a time in his mouth while also making sure whatever Super Bowl ring he brought is visible at all times? Laugh out loud funny shit. Luckily Jerry always has some sort of pop culture reference for awkward situations that will endear him to the kids. 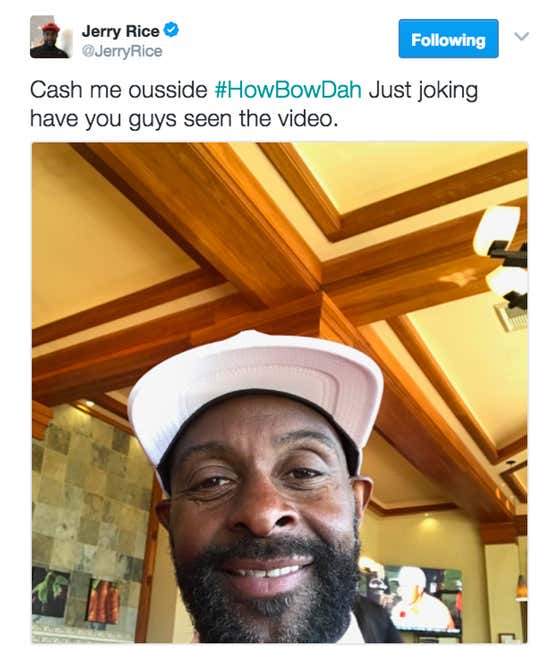