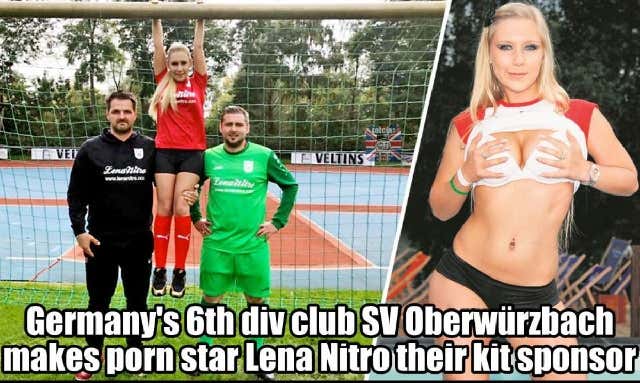 NY Daily News – This soccer team’s new sponsor is for mature audiences only.

German amateur team SV Oberwürzbach will wear the words “Lena Nitro” on its jerseys, with LenaNitro.xxx below in smaller print. The sponsorship is for Nitro, who is a German adult film star.

I take a back seat to no man when it comes to love of my country. But for all my patriotism, there are times when I’m reminded how much behind other cultures we are. How, because the nation was founded by uptight, Bible-clutching busy bodies with buckles on their hats, we can never be as cool about certain things as the Europeans, even 400 years later.

I know SV Oberwurzbach is an amateur club. But still. If some men’s softball team over here was sponsored by a porn actress, there’d candlelight vigils, mother’s groups protesting and preachers screaming through bullhorns about … the children. Seriously, we’re still having debates about what will happen if pro leagues put shoe company ads on their uniforms. Boston was lousy with baseball purists falling on their fainting couches when the Red Sox put giant Coke bottles above the Green Monster. Remember when the world was ending because everybody put rolling billboards behind home plate? I can’t even fathom the outrage if an adult film actress slapped her ad on an amateur soccer team’s unis.

But this is how progress is made. One step at a time. First Lena Nitro sponsors SV Oberwurzbach, eventually Asa Akira’s name appears on the jerseys of the New York Giants. You may say I’m a dreamer, but I’m not the only one.