TMZ Sports - As he’s entering the tunnel, the wideout drops an f-bomb and 1-finger salute on the heckler — which got more K.C. fans to clap back.

But Terrelle REALLY lost it when the same guy called him a “little p*ssy” … to the point where a team staffer had to step in and restrain him. At one point, Pryor acts like he’s going to swing his helmet at the fan but stops himself. 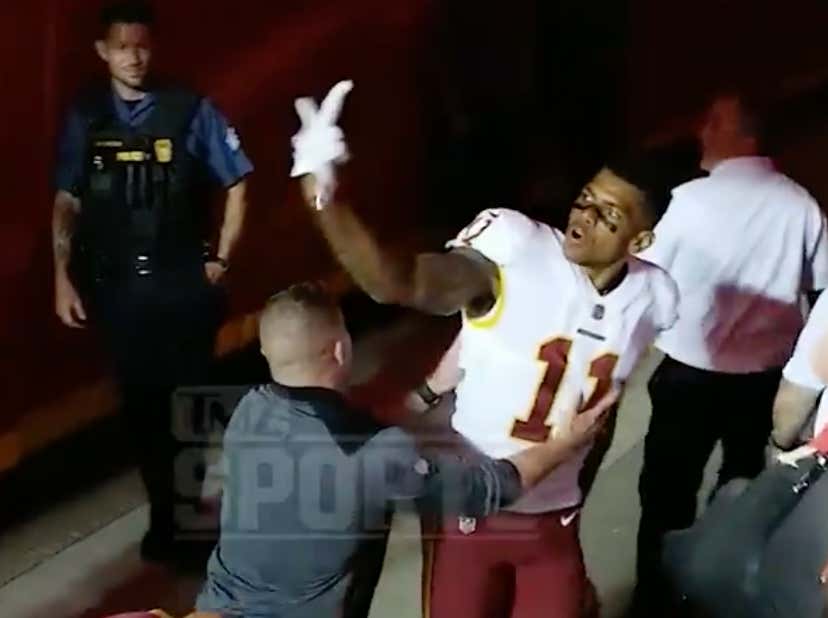 Hot take: I have no problem when athletes, who at last check are in fact fellow human beings, fight back against hecklers/opposing fans. If a Chiefs fan wants to call Pryor a pussy, he has every right, just as Pryor has every right to yell back/beat his ass. If someone walked up to you in the street and unleashed vicious trash talk on your like “hey Joe in accounting, you freaking suck, you just sit in your cube all day sucking dongs and eating your own poop” (VICIOUS), you’d have every right to lose your mind. Same goes for NFL players. If Charlie Chiefs Fan wants to talk shit, he should have to face the consequences. It’s how real life works. I get that maybe you can’t swing your helmet and knock his teeth out, but I never have a problem with a guy who is putting his body on the line out on the football field losing his cool in the heat of the moment. It must be hard as fuckkkkkk to stay cool after a 60 minute football game and some geek is calling you a pussy and talking about how he fucks your mom. Who wouldn’t want to kick that guy’s ass?

So Pyror will be fined and disciplined and all that fun stuff, but I’m beginning to think nobody actually in the NFL cares when things like this happen. It’s natural human reaction, and for the most part, I think the majority of players do a really exceptional job not lashing out and losing their minds, given the high profile jobs they have and the high pressure situations they are put into.