Dan Warthen, who has been the Mets Pitching Coach since 2008, will not return as New York’s Pitching Coach, and has been offered another role in the organization. Bench Coach Dick Scott, First Base Coach Tom Goodwin, Bullpen Coach Ricky Bones will be given permission to speak to other teams, pending the selection of a new manager. The Mets will retain coaches Kevin Long and Pat Roessler along with Third Base Coach Glenn Sherlock who is already under contract for 2018.

Ray Ramirez, who has been the Mets Head Trainer since the 2005 season, will not return in 2018. The rest of the training and conditioning staff will remain with the club for the 2018 season.

Free at last, free at last, Thank God almighty are free at last!!! Mets fans no longer have to watch their team slowly disappear one by one like a horror movie during the season. There is a chance now that injuries will be diagnosed correctly and given the correct time to heal along with making roster moves that allow the team to compete while a player is recovering. What a novel concept! The Mets no longer have to fight with one armed tied behind their back while the other arm is broken because their medical training staff misdiagnosed it as a sprain and thought rest would heal it. Words cannot describe how great this news is for Mets fans.

Athletic trainers are like referees in sports. If you know their names, they are either REALLY GOOD or REALLY BAD. Ray Ramirez was one of the really bad ones, to the point that every year he got the loudest boo on Opening Day, even including the opposing team.

Even fans of other teams knew the name of Ray Ramirez. That’s when you know shit is bad. And I know we can’t blame Ray Ramirez for every single muscle pull that has happened during his reign of terror. But sooner or later, when your franchise being the poster child for medical disasters, you have to make a change at the core of the problem. I mean it took the Mets two fucking days to correctly diagnose K-Rod with pinkeye back in the day. His eye was pink and itchy but the medical staff was like “Wait, this may be something else”. 48 hours, pinkeye. All it took was maybe the most comically bad injury season in baseball history to kill the R.A.Y. system. But you can’t make an omelette without cracking a few eggs. Smell ya later, Ray! 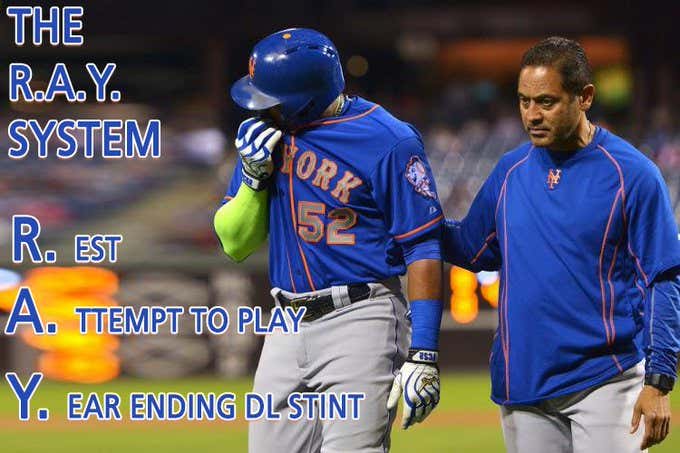 Celebrating our athletic trainer getting fired as Yankees fans get ready for a postseason game seems sad, but I don’t give a fuck. Today is the day Mets fans have been waiting for, even if that clown Mike Barwis escaping the chopping block means this is all a half measure. The sun may rise in Flushing next season after all.

For more on Ramirez, you can read Frank The Tank’s blog about him from this summer.

My goodbye letter to Ray Ramirez:

P.S. Lost in the mix was Dan Warthen being reassigned or whatever you want to call it. I know some people didn’t love him, but the Mets always seemed to outperform their talent with pitching when Ray Ramirez wasn’t hacking at their arms with a chainsaw. R.A. Dickey turned into a Cy Young Award winner and a tradable asset that got the Mets Thor and Travis d’Arnaud. There has been lots of talk about Frank Viola as a replacement, but I will miss Warthen because he was a good pitching coach during his time here.