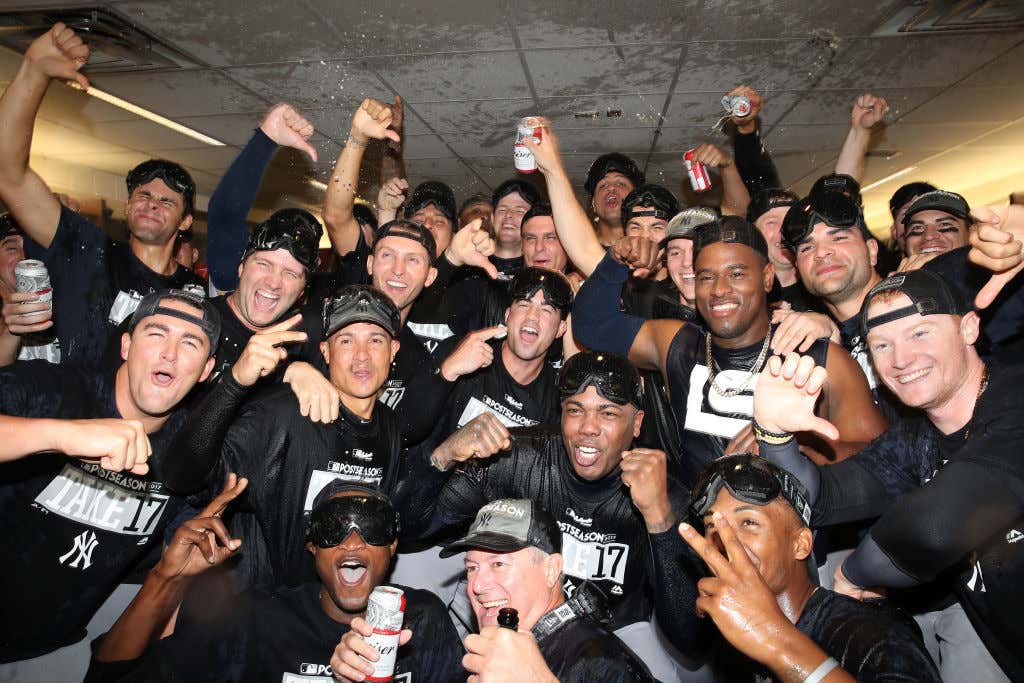 Hey everyone. We’re a little over 24 hours from the most nerve-wracking baseball game in quite some time. The Wild Card game is stupid. One single game to decide your season to get to the ALDS is just pure insanity. Tomorrow I will have a complete breakdown of rosters, matchups, horrifying nightmares I’ve been having about this, the whole nine yards. But right now? Right now we’re gonna revisit the top 10 moments of the year because I’m losing my mind thinking about tomorrow and I need to calm myself down.

****Disclaimer: I have no idea if you’re supposed to start countdown lists at 10 or 1, but we’re gonna start at 10 cause it feels right.

The introduction of El Rojo in the Bronx. This homer was fucking magical during a time where the offense was beginning to stall.

They still never got an exact distance on this ball but I’ll just assume it was over 500 feet, because it was.

In a big test, late in the season Severino went toe to toe with Chris Sale and absolutely dominated. The stadium was rocking as the Yanks finished off a three out of four series win against the Sox.

FOUR HUNDRED AND NINETY FIVE FEET. I was there and actually didn’t believe what I saw. It’s simply illogical to hit a ball that far.

The culmination of a historic season. Judge deserves to be your AL MVP for the absurd season he just entertained us with. He’s a goddamn monster and I pray he keeps it going tomorrow night.

The Yankees were pretty much dead in Pittsburgh when Starlin Castro uncorked a three run homer to tie it in the 8th. Soon after Chris Carter (remember him?) came in to pinch hit and hit a go ahead three run bomb to center (an absolute no doubter). Judge capped off the comeback with a fucking moon shot, jaw-dropping homer to center.

Once again the Yankees were dead in the water when Brett Gardner stepped to the dish with two outs, representing the go ahead run. After fouling off a ton of pitches, Gardy ran into a hanging curveball and deposited it into the right field stands for a gigantic homer. Gardy was FIRED UP.

Craig Kimbrel’s first blown save in Fenway. Chris Sale was shutdown city for most of the game and it looked like Boston was gonna win 1-0 in demoralizing fashion. We were doing our first watch party of the year for this and it was absolutely incredible when Holliday connected.

The Yankees were absolutely dead in the water on an April Friday night at the stadium. Trailing 11-4 in the 7th, Ellsbury stepped to the dish and launched a grandslam to cut the lead to four. Starlin Castro tied the game (Adrian Beltre style) in dramatic fashion in the 9th inning. Matt Holliday ended the night with a walkoff bomb in the 10th.

It’s been a magical season folks. Everyone pray to a higher power for tomorrow. Miguel Sano is coming off the bench which is good news, but also equally terrifying at the thought of a Sano late inning pinch hit at bat in a close game. Gulp.