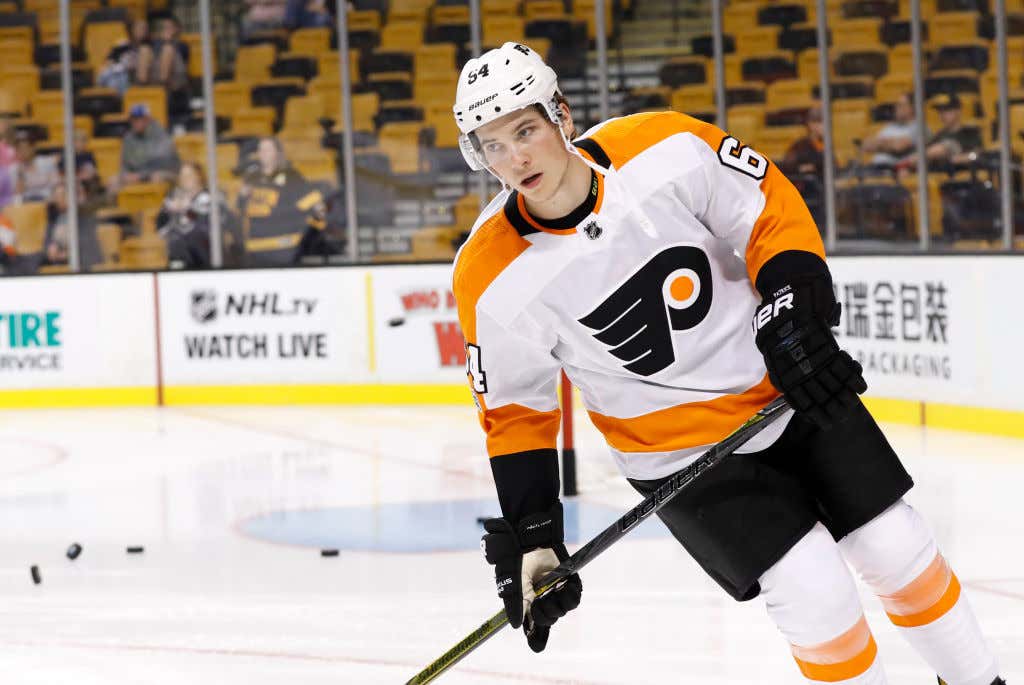 We’re just 48 hours away from the start of the 2017-18 season. A lot has happened between the enormous disappointment at the end of last season and now. The Flyers became the first team in NHL history to go on a 10-game winning streak and also fail to make the playoffs in that same season. It was one of the biggest Philly Meltdowns in a city that is known for historic meltdowns. Since then, the Flyers landed the #2 overall pick and got Nolan Patrick. They traded away Brayden Schenn at the draft. They re-signed Jordan Weal. They let go of Michael Del Zotto and Mark Streit and Steve Mason. They signed Brian Elliott in free agency. Ivan Provorov and Travis Konecny have both gotten a year older and it looks like for at least some portion of the season, they will move Claude Giroux to the wing. So while there hasn’t been a massive roster overhaul between last year and this year, the Flyers are going to have a much different look heading into this season.

Last night Ron Hextall made one of the final roster decisions to get the Flyers closer to a 23-man roster by sending Oscar Lindblom to Lehigh Valley. Obviously this decision isn’t one that is going to sit well with most Flyers fans considering Lindblom is one of the rookies on this team with the most promise. While he didn’t produce as much as he possibly could have in the preseason, I think most can agree that he has a much higher upside than some of the guys who have solidified a roster spot for themselves on opening night. With that being said, it’s not like Lindblom is going to stay in Lehigh Valley the entire season. He’ll have his stint up in the AHL and will be the first call up whenever that time becomes necessary. Now let’s get to the guys who we’ll see on the opening night roster in San Jose on Wednesday. 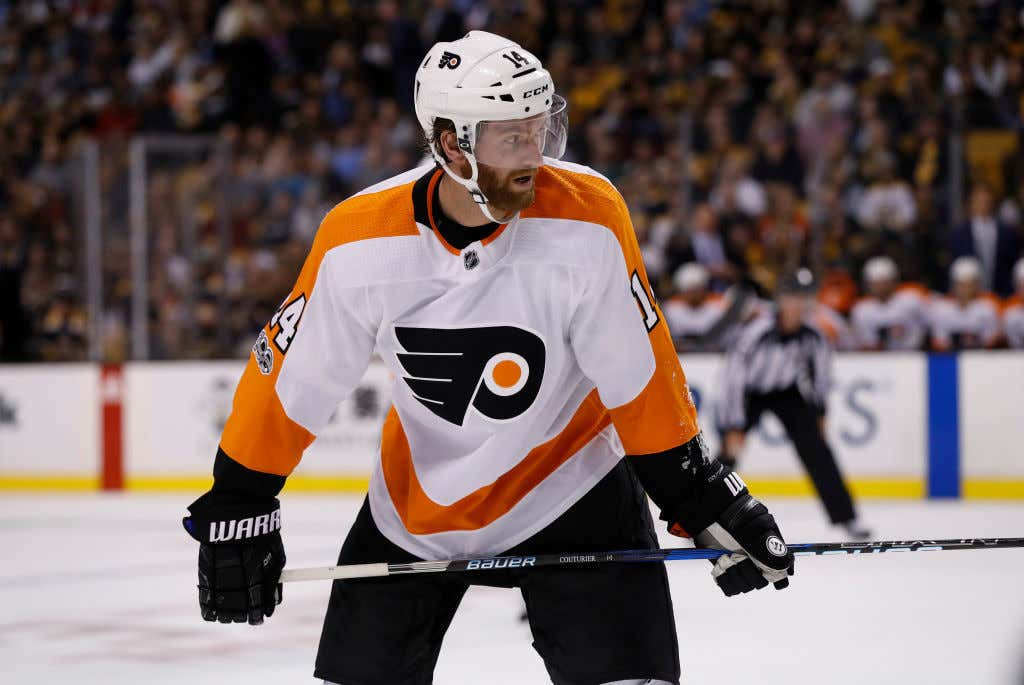 I don’t know what sentence I never expected to see more. “Claude Giroux is playing left wing” or “Sean Couturier is a 1C in the NHL”. By now everybody knows the story with Sean Couturier. At his best, he can be one of the better shutdown centers in the league. It’s not like Philly fans have been touting him as a future Selke nominee for nothing. Just ask Evgeni Malkin. But coming into his 7th season (holy shit how has it been that long already), he still hasn’t had a season where he put up 40 points yet. Obviously playing between Claude Giroux and Jake Voracek should help him get those numbers up this season. But in order for him to to stay between those two, he’s going to need to start producing. And then there’s 1LW Claude Giroux. I’m praying this experiment works out because this could be a huge move for G. I’ve said this before but having less responsibility in the defensive zone should be great for allowing him to get a jump on the breakout and hopefully catch a few more 2v1’s with Voracek. Obviously completely switching positions like this isn’t going to be the easiest adjustment to make. But this should definitely help the top line have more versatility in all three zones. Giroux, Coots and Voracek are all in a weird “what have you done for me lately” type of spot right now and are in need of bounce back years. Clearly there’s a little bit of desperation that goes into making this line adjustment and hopefully it pays off. Would love to see it last for the majority of the season. 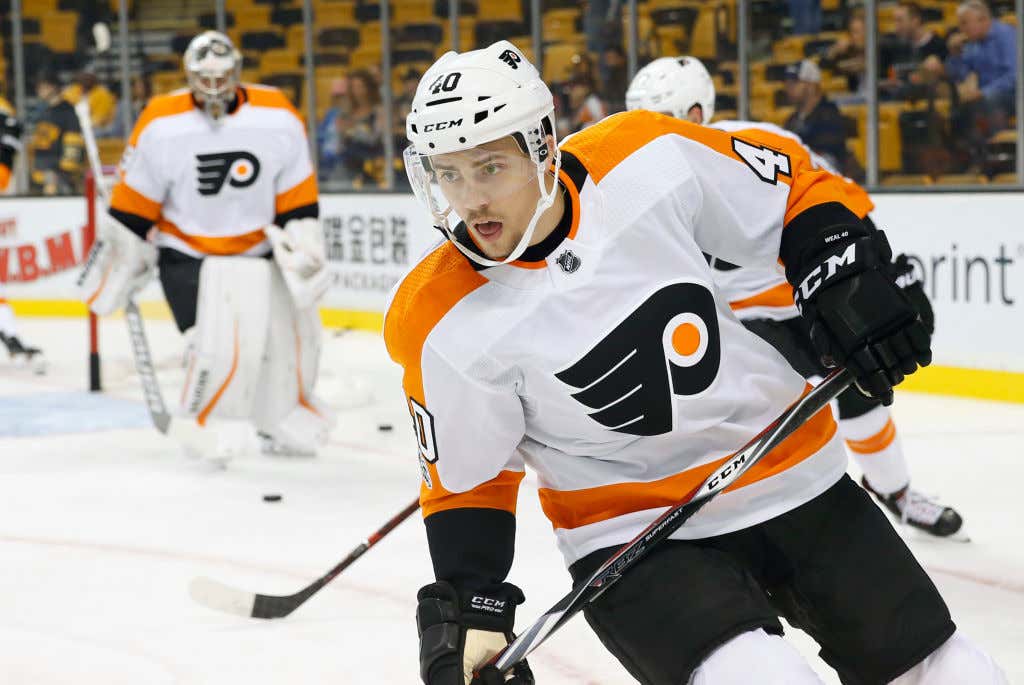 Jordan Weal cracking the opening night roster feels like a huge win for Flyers fans after it took forever to get him up here last year. 8 goals in 23 games on a team that desperately lacks scoring last year is actually good. Especially considering he was more or less just a throw in for the Luke Schenn/Vinny Lecavalier trade to LA a couple years ago. He’s a little undersized but hustles his ass off every single shift. Which is exactly what you’re looking for when putting somebody on a line with Wayne Simmonds.

You already know what you’re going to get out of Wayne. He probably reached his peak last season but I wouldn’t expect any regression this year. This is going to be a line that teams have no idea how to match up against. All 3 guys can produce offensively. All 3 guys can play a physical game. The only thing they can hope for is that it takes Nolan Patrick a little while to find his game in the NHL. But what you may or may not know yet is that Nolan Patrick just switched his jersey number from 64 to 19 today after officially making the Flyers’ roster. Joe Sakic, Steve Yzerman, Jonathan Toews, Nolan Patrick.

This is obviously where you’d hope to see Oscar Lindblom come in eventually and play LW with Filp and Konecny. Until then, the Flyers will most likely rotate scratches between Dale Weise and Matt Read. Regardless of how baffling that decision is, I think Travis Konecny was my number 1 star of the preseason. Granted, I didn’t get a chance to watch every game but the ones that I did, he was noticeably impactful every time he was on the ice. He’s always had a knack for getting under the other team’s skin. Now he’s got a full season under his belt and seems to be playing with a lot more confidence. Travis Konecny is going to be the guy on the Flyers that every other fanbase in the Metro Division despises. And for that, I love him. Like I said, being stuck with Dale Weise and Matt Read is a tough draw for the kid. But eventually Lindblom will get the call up and that’s when he and Filppula can ball. In the meantime, I wouldn’t expect too much out of this line offensively aside from making sure the intensity of the game is on high. 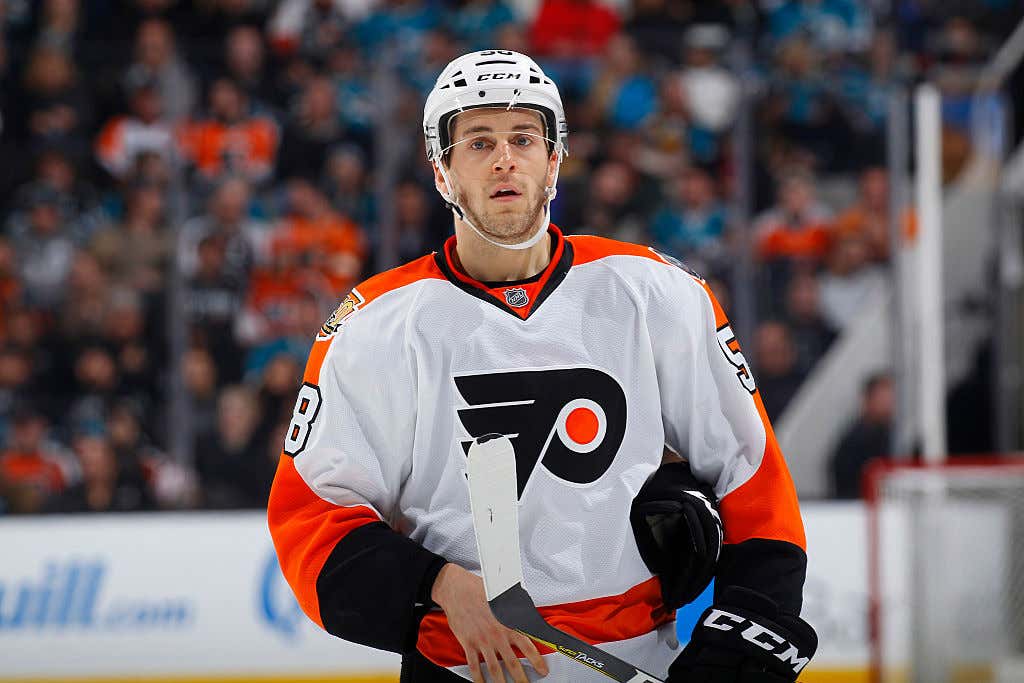 Aside from moving Giroux to the wing, this is probably the biggest difference between last year’s Flyers and this year’s team. Because for the first time in pretty much forever, the Flyers will have a skilled 4th line. Leier had been more or less a bubble guy during training camp but he looked promising during his few call ups last year and did enough this preseason to earn himself a spot for Wednesday night. Scott Laughton is a former 1st round pick who hasn’t been able to meet expectations yet after being considered a Mike Richards type of player. After spending the entire season in the AHL last year and now given a 4th line role but with actual hockey players on his wings, it’s the perfect situation for him. Sorry but you can’t throw Scott Laughton out there every 5th shift with Matt Read and Chris VandeVelde on his wings and expect him to produce. But with Leier and Raffl? There’s plenty to like there. Especially considering Michael Raffl continues to help this team in any way he possibly can. He’s one of the very few players in the NHL who can play on all 4 lines. He’s been a 1st line guy with Claude and Jake for a while. Has bumped around between the 2nd and 3rd line for a while. Now he’s down on the 4th line but has an opportunity to play on what looks like (on paper) one of the best 4th lines in the league. I was fully prepared to lose Raffl in the expansion draft this past summer. Thank god that’s not the case.

So yeah. Outside of the Lindblom blunder, there’s really nothing to not like about this Flyers lineup. They are deep. They are balanced. There are a lot of different guys at different positions who need to prove themselves this year. Hopefully a lot of them are embarrassed about what happened last season. Not just as a team but individually. Anger and frustration can be a huge motivator.

We’ll preview the defense tomorrow. As of right now, it looks like Gostisbehere’s injury from last night might keep him out of the game on Wednesday night. So with that in mind, the Flyers placed Matt Read on waivers which means they’ll likely keep 8 defensemen for the road trip. So as of right now, both Travis Sanheim and Sam Morin seem to be safe. Sanheim is most likely heading to Lehigh Valley after Ghost is healthy but maybe he makes the most of this opportunity and forces the Flyers’ hand.