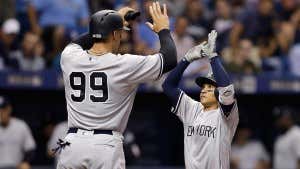 The work of the 2017 season isn’t done yet, but man that was a fun regular season. Coming into the year, the haters (Carrabis) and losers (RDT) couldn’t help but talk shit about how bad the Yankees were going to be. This was a team in rebuilding mode, with a bunch of prospects in the minors, so it was easy to pile on and hope that the big brother of the AL East wouldn’t show up this year. Unfortunately for everyone else, this team was as good as I predicted and we are headed back to the playoffs.*

At the beginning of the season myself and the other AL East bloggers did a podcast (I can’t find it) to preview the season and at the time we all had to predict how our teams would finish the season. My prediction was that we would fight for the division but likely be looking at a Wild Card spot. I also said, “The current team is a .500 team, but if they show they can win early, Cashman will load up.” and we did without sacrificing the future of the organization. Now that we know how good this team ended up being and how dead on balls accurate my predictions were, let’s talk about the excitement of the regular season.

The 2017 Yankees came out of Spring Training ready to dominate. Greg Bird hit a million home runs and Tanaka basically threw a perfect game the entire preseason, so what could go wrong? Well Tanaka gave up 7 runs in 2.2 innings and opened the floodgates for criticism. Hell, myself and KFC have done a podcast every year talking about the Yankee and Mets upcoming seasons and this year he said, “It’s kind of pointless with the Yankees being so bad and the Mets so good.” Ronald Torreyes hit a home run in game 2 (pictured above) to give us a peak at how wacky this season would be but after the first week of the season we were 1-4 and things looked terrible. Gary Sanchez was on the DL and Greg Bird would join him and things looked dark, until this team found its identity and started rattling off wins.

It starts with 8 wins in a row (9 of 10) and Aaron Judge beginning to absolutely MASH. The rolls into a 2-game sweep in Boston, that Sox fans blamed on weather or luck, and a few series wins to get us in first place. Yankees fans were excited while everyone else doubted us and then the unlikely happened and everyone took notice.

The Yankees went to Chicago and beat the defending World Champion Cubs with a 9th inning comeback, a demolition on Derby Day and a Sunday Night Baseball 18 inning marathon. This series made us legitimate contenders in the eyes of the rest of the league, but also showed us fans that this team was fun and the players were having fun. This loose atmosphere gave the team character that hasn’t been seen since the Steinbrenner’s took over ownership and the players weren’t afraid to be themselves.

We started the season with “finger guns”:

Then we got into the dog days of Summer and the team started to slip. Players got injured, Judge slumped and El Gary forgot how to block a ball in the dirt. All things that happen throughout a 162-game season but when it happens to the Yankees, more people take notice and jump to criticize. The players kept plugging away and trying to find ways to win games while their injured teammates worked their way back. This led to the debuts of Clint Frazier, Dustin Fowler, Miguel Andujar and about 10,000 relievers. Some guys stuck, some got injured and some prospects got traded but the Yankees did what the Yankees do and loaded up for a postseason run.

Brian Cashman went out and got the top pitcher available on the trade market in Sonny Gray, loaded up the bullpen for the future by bringing in Tommy Kahnle and bringing back David Robertson. On top of that he brought in Todd Frazier, who has underperformed but also woke something up in Chase Headley and saved us from the error showcase that was going on at third base.

As August dragged on, we showed signs of life in sweeping the Mets, but losing 2 series in heartbreaking fashion to the Red Sox had everyone wondering if we were getting ready to watch the beginning of the end to our season. That is until Miguel Cabrera woke this team up with his slapbox punches.

From there, we were off to the races. To finish the season The Yankees won 10 of 12 series, Aaron Judge got back to his first half form, and our pitching has figured most of their problems out. Almost everyone is heathy and playing to their potential as we head into the playoffs with camaraderie through the roof.

And we’re headed into the postseason with a guy who should be the MVP this season.

Overall there have been ups and downs that you expect over the course of 6 months, but at the end of it all we’re in the tournament and our future looks bright. Even if we don’t win the World Series this year, we’ve got many more exciting seasons to come and will win a title in the next few years.

PS: That last line was a shitty attempt at being humble. We’re winning the World Series this year.

*The Wild Card game is the playoffs. Both times the Yankees have made it since the playoff expansion they were the #1 seed and would have been in during the old format. Plus, if they paint the postseason logo on the field, it’s the playoffs.