I tried to make this a weekly feature back when I was an intern, but between my side jobs and responsibilities as Fore Play producer, it became increasingly difficult to see a movie every weekend…and it was also super expensive for someone not making any money. I’m no longer the Fore Play producer, obviously, and no longer have side jobs, because now get paid to do this shit! So the Monday Morning Movie Review will be coming back in a big bad way just in time for #OscarSzn and I’ll give you guys my take on whatever movie (or sometimes movies) made waves that weekend. Good, bad, meh, I don’t care. I kinda had a soft reboot of the MMMR with my “mother!” recap a few weeks ago, so check that out if you’re interested because that one is still in theaters.

Note: There will be no spoilers in this blog until I say so.

Today I’ll be talking about a movie called Flatliners, starring Ellen Page, Diego Luna (Rogue One alumni, thank you for your service Captain Andor), Nina Dobrev, James Norton, and Kiersey Clemons. All five play medical students who “embark on a daring experiment: stopping their hearts for short periods, each triggering a near-death experience – giving them a firsthand account of the afterlife.” Now if you’re asking, “Bob, there was a shitty Kevin Bacon movie that came out way before you were born called Flatliners…any relation?”, the answer is yes. This is the remake of that movie that nobody asked for. 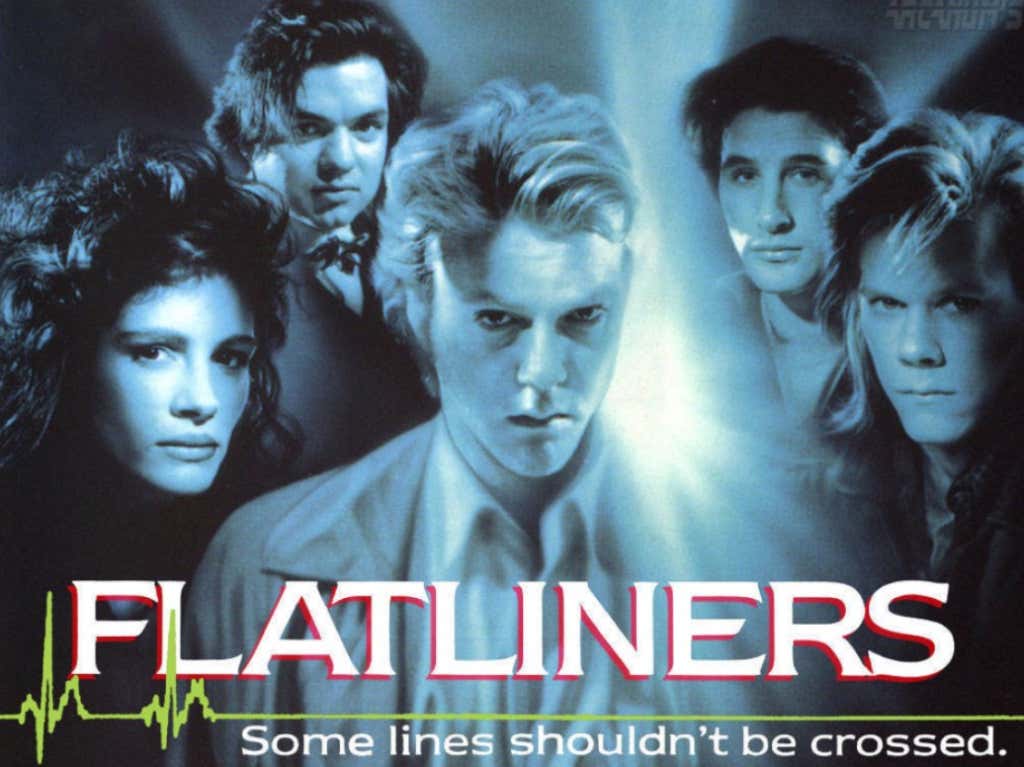 When early reviews started coming out, I was pretty disappointed, because they were all bad and I thought the trailer looked cool. I’d argue the concept is STILL cool, and the trailer made it look like a psychological thriller I’d be into. As the reviews got worse and worse, I decided I was going to see it this weekend because I can’t look away from trainwrecks. When I logged on to Rotten Tomatoes and saw the movie sitting at 0% after 16 reviews, we had a CODE RED reverse “Get Out” situation on our hands, and purchased my ticket to see Flatliners that night. 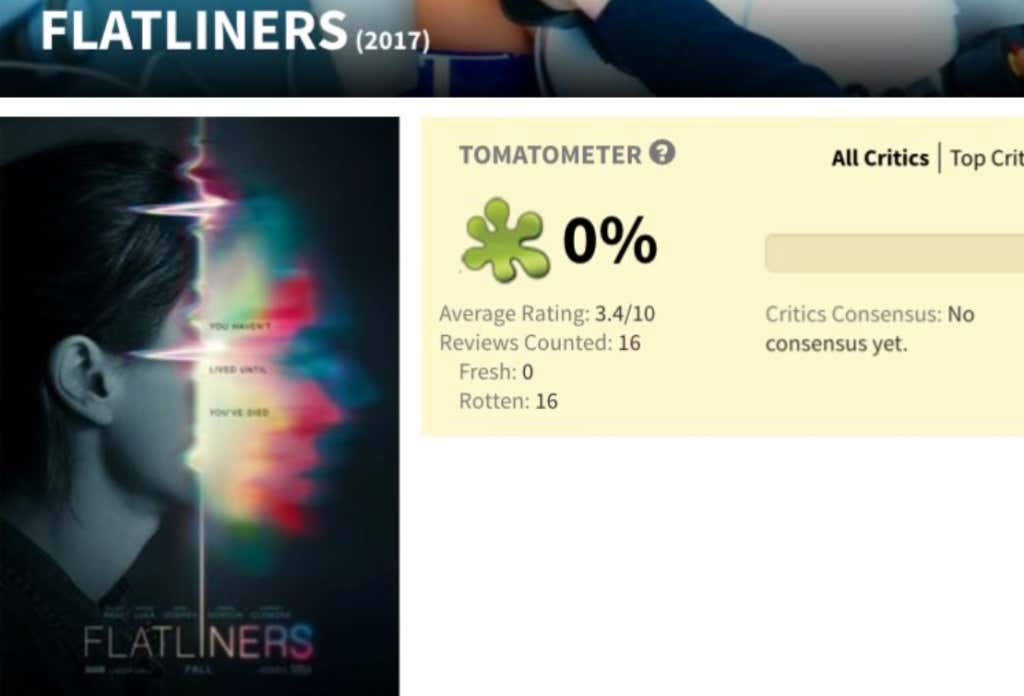 I was not disappointed AT ALL. I could tell within the first five minutes of Flatliners that it was just as big a piece of shit as advertised from the cringe-inducing dialogue that sounded like it was ripped straight out of an 80’s made-for-TV movie. Seriously, it was like the OG 90210 or something, and it now made sense why the trailer playing the most in theaters for Flatliners had no dialogue. Multiple lines (and their delivery) made me and a few others in the theater laugh out loud in what were supposed to be serious moments.

The flick wastes little time getting right into the plot, giving each character a somewhat misleading and painfully cliche introduction before the first “flatline” takes place…like ten minutes into the movie. You’d think this would be a dramatic moment…I mean, people are agreeing to murder their friend at her request, and Courtney, the main character, is putting her full trust in these slightly trained medical students to revive her from the dead all in the name of science. I could feel some tension build up in my keyboard just from writing that, but when executed on the big screen…nobody cared, and they had no reason to. It’s hard to come back from a flatline like that in what is practically the opening credits of your movie.

As the movie progresses and the other characters try flatlining, they each receive their own subplot (or subplots) that range from unexceptional to dreadful, making you like everyone less and less, all the while drastic tonal changes are taking place. It went from high intensity revival procedures to romantic/sexual encounters to a party/nightlife montages to it’s true and final form…schlocky jump scares. 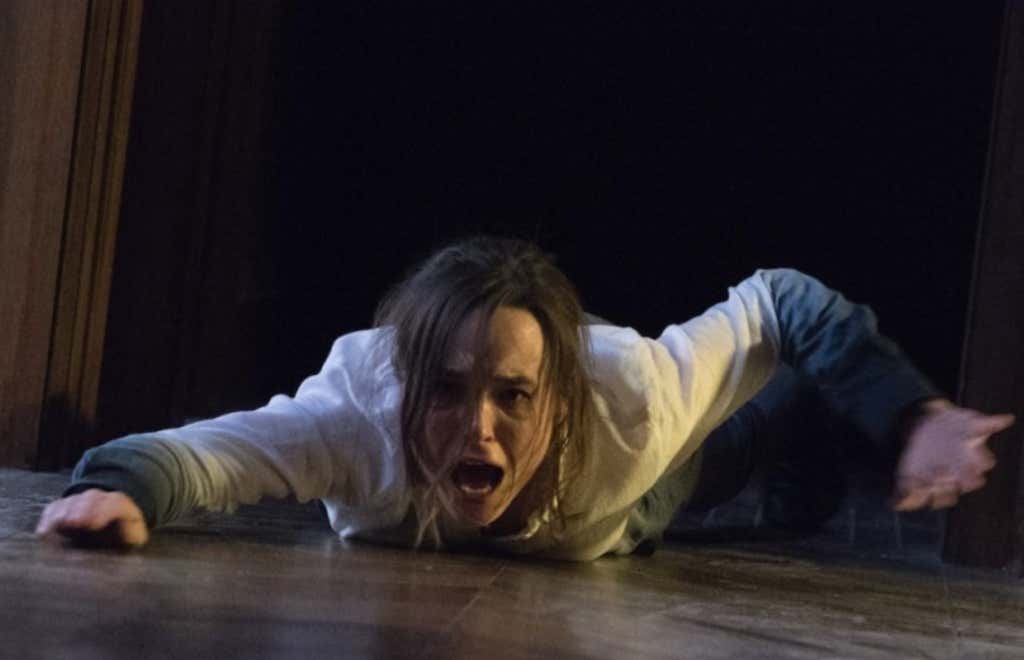 Flatliners dips its toes in the water with short “BOO!” scenes a few times in the second act of the movie based on each character’s past haunting them after dying, but they’re done so infrequently that they just feel out of place. By the third act, you’re beat over the head with about two hundred clang-accompanied jump scares. It got to a point where they weren’t even registering with me, and that says a lot because my heart is a total pussy. Starts hitting the double kick pedal if it even SUSPECTS a jump scare. Honestly though, this felt similar to a really bad pro wrestling match that ends in each guy hitting their finisher multiple times to try tricking the audience into thinking they were watching a classic. I was of the opinion that Flatliners was trying to get one over on me by the end of it, as if I’d leave the theater and go “Man, that was spooky, wasn’t it?! What a horror film!”, forgetting about everything I watched to get to that point.

I know I said “mother!” was the worst movie I’ve seen all year, but Flatliners has already outdone that two weeks later. At least mother! put a thread of doubt in my mind that I was the idiot and the movie was the smart one. Flatliners, on the other hand, came awfully close to making me feel sympathy for whatever brains thought any of this was a good idea. Plus, the whole movie is a plothole because Nikki Sixx did this shit already and he was fine. No spooky ghosts came after him. He was gucci.

Do I recommend you see Flatliners? If you’re into watching “So Bad It’s Good” movies, this one’s worth a watch, but don’t waste your hard earned money on a movie ticket. Wait till it’s on Netflix, get hammered, and throw it on. You’ll get a few chuckles for sure. Otherwise, no, I do not recommend Flatliners.

Below, I’ll have my spoilerific bullet points on a few stupid things I want to make fun of. Make sure to join me next Monday at 10am for my review of BLADE RUNNER: 2049.

Alright let’s talk about a few things real quick before I get out of here. I have many questions.

-What was up with Courtney making a one-off comment about her flatlining experience being sexual? That was some weird shit.

-Why did Jamie and Sophia have sex, followed by Jamie defiantly telling her mom she was moving out? What purpose did any of that serve?

-Uhhhh, was that supposed to be a happy ending? Jamie, this absolute toolbag, is gonna come into his kid’s life after four years and raise him with the mother that he envisioned trying to murder him for a while? Marlo ISN’T expelled from med school for changing the autopsy report of a patient she killed? Because honesty is the best policy or something? Sophia is forgiven for ruining a girl’s life via nudies just because she asked twice?! Oh and the main character, Courtney, is a dead person because she never forgave herself for crashing her car and accidentally killing her sister. So the only person that actually didn’t do much wrong is dead. The song played at the end suggested they were open to the possibility of a sequel, too, which like…crying face emojis, yo.

-Courtney’s little sister was actually a zombie type thing, real enough to murder her, and Jamie’s ex-girlfriend was the same way, able to stab him in the hand and leave a cut…but Marlo’s Jellyfish boy wasn’t? Or was, maybe? I have no idea.

-Why establish in the beginning of the film that brain damage occurs after 4 minutes of the body dying, and casually mention at the end that Marlo’s been dead for 4 minutes before spending at least 2-3 minutes on the revival process? Take that time liberty of you want, but don’t insult the viewer by thinking they wouldn’t remember that line.

-While we’re talking about Marlo’s final flatlining process, how/why did she do that by herself? Doesn’t Courtney explain in the beginning that you need someone to inject you with that serum to knock you out and lower your body temperature to juuuuuuust the right degree, then they’ll use the defibrillator to kill you? Brush that aside, why did she flatline herself? If she wanted to kill herself, she could’ve just committed suicide in a simpler way, but I suppose she wanted to get the forgiveness of Jellyfish Boy, in which case, why didn’t she ask her friends to help her out so she didn’t get his forgiveness and then permanently die? God this movie was so fucking dumb.

-The scene after Courtney goes through flatlining where it shows that it made her a genius was so stupid. It was like when Spider-Man got his powers and was flexing them everywhere, but somehow less realistic than a radioactive spider bite turning a human into a spider.

-Best part of the whole movie was the dramatic rooftop scene where Sophia breaks down in tears asking the group to flatline her so she could get better grades after Marlo almost died, and Ray goes, “You think dis make you better?! Dis make you dead!” I cracked up. Pretty good when he finally has sex with Marlo and she says “I hope this doesn’t become awkward.” and he creepily says “Too late.”, too.

-Why was Diego Luna a firefighter? Are there a ton of deleted scenes that flesh out his character, or was that a thespian reveal just for shits and giggles?

-Camerawork didn’t show much of Nina Dobrev during her sex scene (or Diego Luna for the folks swinging for the other team), so the cinematography also sucked.

I really hope I like Blade Runner next week, because movies like Flatliners which had $20mil in production budget alone fire me up. Clerks was made for $27,575 dollars. Sony could have had 725 Clerks instead of one Flatliners with a little faith in independent filmmakers with a vision.