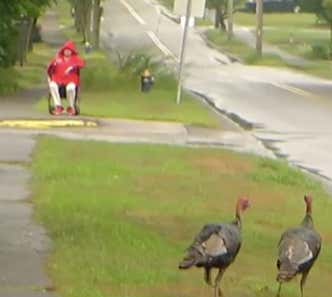 Source - City leaders in Cambridge, Massachusetts, are seeking guidance after some residents have complained about nuisance turkeys terrorizing their streets. While some enjoy the company of the bold birds, many neighbors say they have become more aggressive over time.

“There’s no stopping them. They are sure they own the neighborhood,” Jacquie Olds said. Olds’s front window was smashed by a turkey over the summer and she says that is just the beginning of the turkey trouble. Her neighbors have put up wire around their gardens to try and protect the plants they say the birds keep ruining.

Several of them were spotted circling a dead cat in March.

It has become such an issue in Cambridge that the city council is now asking the Cambridge Animal Commission for advice on how to deal with the influx of animals that many blame on development.

“Nobody wants to hurt wildlife, but how we plan to live with them is another issue,” city councilor Dennis Carlone said.

As the city council waits for analysis and guidance, the Cambridge Animal Commission did put out guidelines for residents who spot the birds on their property. They recommend scaring the birds off with loud noises and do not recommend feeding them.

At least that’s what you’d think. But here’s the thing about Cambridge residents, they’re not very smart when it comes to turkey huntin’. At least the residents of Avon Hill aren’t. Take little old Jacquie Olds for example, she decided the best way to combat the nuisance birds was to write a little old note asking them to stay out of her little old garden. 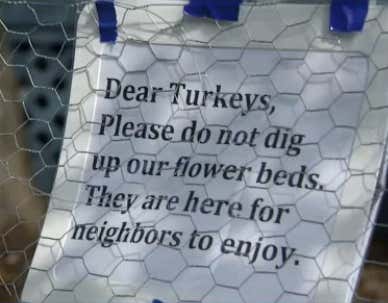 Polite, yes. Effective, no. Especially when you’re dealing with an enemy as organized and bold as the Avon Hill gang. Just last year they made news for killing and circling a neighborhood cat for not paying its protection.

An example needs to be made.

If the residents need moral justification they can use Thanksgiving. There are plenty of families that would appreciate an ivy league turkey. Which taste like regular turkey with a hint of entitlement. Personally I’d suggest outsourcing the job. Let a street soldier risk jail time. If you don’t want to kill, you can always break a wing. Sometimes injuries send a louder message than death. If the group sees what you’re capable of they’re less likely to continue the behavior.

Regardless, my money’s on the humans. They have blinders on because they’ve been abused for so long but once they come off it’s game over. Besides, the turkeys are a bunch of softies. There’s a reason they’re not pulling a stunt like this in Mattapan- because they know they’d get stomped.