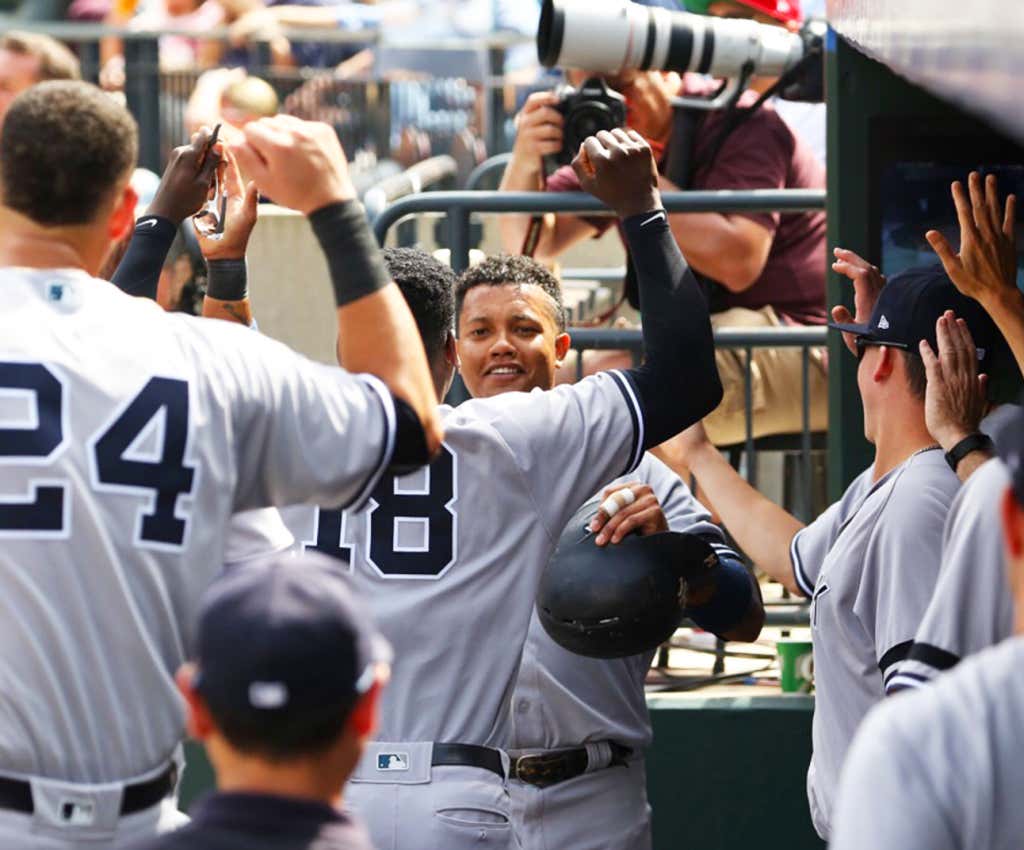 Here we are on September 14th with 17 games left in the regular season. The once coined “rebuilding” Yankees now sit three games back of first place in the AL East. They’re currently three games up in the 1st Wild Card spot and five up on the Angels who would be the next team up. Now don’t put words in my mouth and say “oh Hubbs said the Yankees are still rebuilding so this is all gravy right now.” No. The rebuilding process ended in May when this team scorched Earth in a way I haven’t seen in a long time. The honeymoon ended in mid-June when the west coast trip from hell came upon us. It left us defeated as a fan base with devastating loss after devastating loss and injuries that seemed to just pile up. They lost close to ten series in a row, and shit hit the fan.

It took about a full two months for everyone to get healthy and regain their first half confidence, but right now is the best I’ve felt about this team in a while. They have a lineup that top to bottom I trust to get me at least five runs a game. They have a rotation that gets the job done, along with two top of the line guys that you need for the playoffs. They also have a bullpen that resembles something that the Royals of a few years ago and the Indians of last season had that can win you games from the 5th or 6th inning on. Say what you want about Aroldis Chapman, but since the beginning of September he’s been a much different pitcher. One we NEED to close out games going forward as every game seemingly becomes one with playoff intensity. I mean you saw it the past three days at Citi Field when the Rays came to town. A game where limited tickets were sold, still was louder than it definitely should have been, and that’s because these games mean so much. We’re starting to see how Joe is going to manage these pressure packed games moving forward. He has no time for leaving in starters too long only to see fatigued arms get clobbered or walk another guy. Thank God. You saw it yesterday with Jaime Garcia, you saw it Monday with C.C. Sabathia. If they’re in the fifth inning and a couple of guys get on base he’s brining in Robertson or Chad Green. Those are his two money arms in the pen right now. His version of Andrew Miller the way the Indians used him last postseason. Guys that can go multiple innings of shutdown baseball and give you that bridge to Dellin and Chapman. Andrew Marchand touched on this yesterday in his article about how this team is built to beat the Indians. Now I wouldn’t go that far, but that’s certainly going to have to be the blueprint if they meet in October.

Now you may have seen Garcia and Betances get ticked off yesterday when Girardi had the early hook on both. Jaime Garcia, chill the fuck out dude. You’re lucky we keep letting you trot out there to give us dog shit starts you bum. I would be FURIOUS if he somehow cracks the playoff roster and takes a spot from someone who actually deserves it. With the reliable options we have in the pen (Green, D-Rob, Kahnle, (maybe Warren), Betances, Chapman) it’ll be nerve wracking as fuck to see Binder Joe make a pitching change every three batters but if that’s what he’s gotta do then have at it.

Right now I really trust this lineup to get me five runs a game. Something I really want Girardi to figure out and lock in is where Judge hits in the lineup. From what I’ve seen, he seems more selective and comfortable at the plate when he’s hitting sixth. It’s been a relative small sample size, but in the 6th spot he’s hit .342/.974/1.443 with seven homers and 15 RBIs in 38 at bats. An interesting decision they’ll have to make is what to do with Clint Frazier. He just came back to the team this week and has hit the ball fairly hard albeit the outfielders have managed to rob him of a few extra base hits. So I’m thinking Aaron Hicks won’t be back in time to play the Wild Card game or the ALDS, but that remains to be seen. Let’s say Hicks isn’t ready to come back then I would imagine Frazier would make the roster as a 4th outfielder. Possibly platooning with Ellsbury depending on if a lefty or right is pitching. Either way you’re going to have a solid bat off the bench in the late innings. My ideal lineup going forward is as follows:

So New York is currently three games back of the Red Sox who got beat pretty bad by the A’s last night. Here is our remaining schedule

4 at home vs. Baltimore

3 at home vs. Minnesota (huge)

3 on the road at Toronto

One game makeup at home vs. Royals

3 at home vs. Toronto

Today at home vs. Oakland

3 on the road at Tampa Bay

3 on the road at Baltimore

3 on the road at Cincinnati

3 at home vs. Toronto

4 at home vs. Astros

There’s no reason the Yankees can’t win all of their remaining series, meanwhile Boston might run into some trouble on the road and against Houston to end the year (depending if they play their guys in hopes of catching Cleveland). There’s a lot of baseball still to be played and the division is wide open still. Carrabis told me if the Yanks win the AL East I can shoot him in the face with a paint ball gun so that’s something to root for.

If you haven’t bought your Barstool at the Ball Park ticket yet for this Saturday please click on the link below and buy your ticket. $73 gets you a ticket and unlimited beers and food from 2:00 to 3:30. See everyone out there