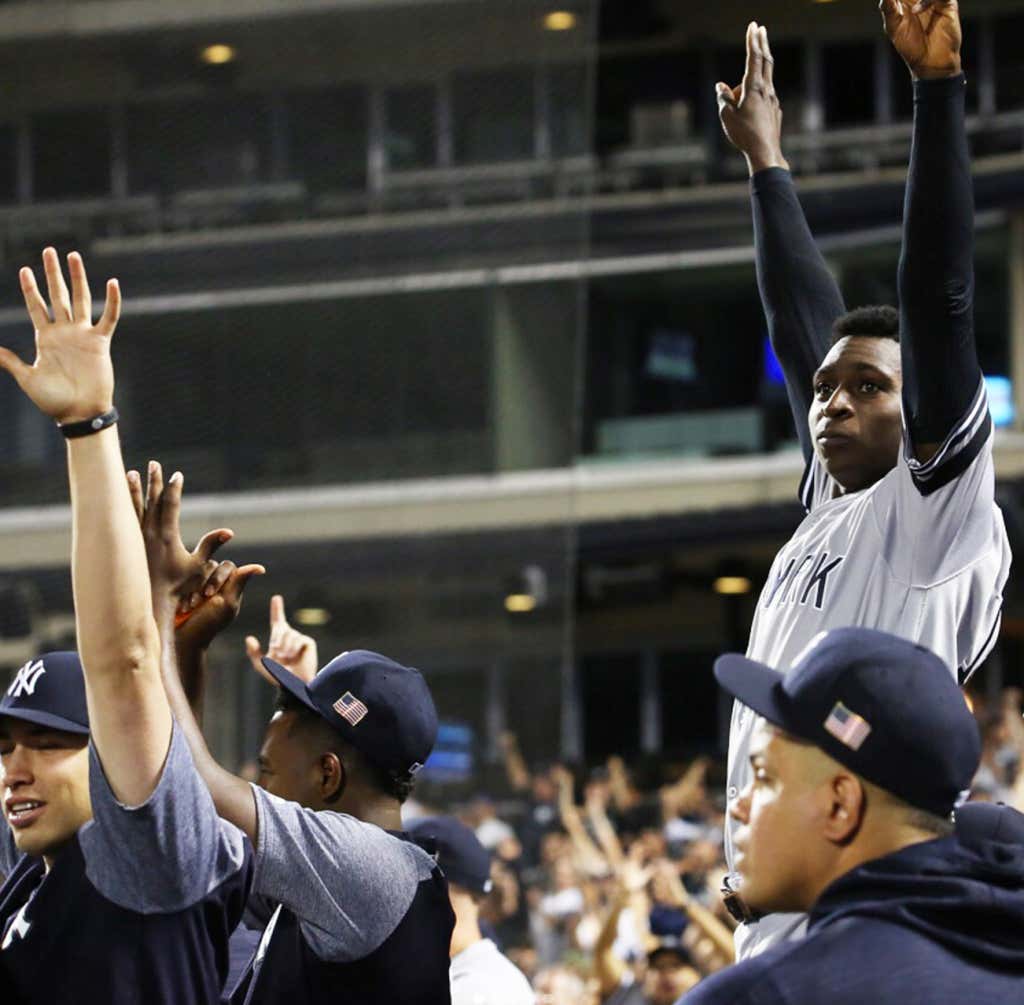 Last night was a bit weird with the Yankees playing in Citi Field against the Rays, with most of the crowd obviously in support of the Bronx Bombers. For the most part, CC Sabathia didn’t have his best stuff, but managed to work his way around trouble, giving up just one run in his four and a third innings of work. For a change, I really liked how Girardi handled the game in regards to the bullpen. It’s apparent to everyone that these last 20 or so games are going to be played like playoff games because of how important they are. That’s why in the 5th inning, with two men on, Girardi brought in David Robertson to quiet things down.

D-Rob was fantastic, striking out both hitters to end any kind of threat. He went on to pitch two and a third innings of one hit ball, giving New York a much needed bridge to Betances-Chapman to say good night. This is the way Girardi needs to be managing these games moving forward no question about it. It’s also nice that I can rely on Aroldis Chapaman again the ninth inning.

The offensive spark last night was lit by Todd Frazier, who jumped on a 3-2 change-up left up a little too much in the zone, and blasted it off the facing of the second deck in left field.

Frazier pimped the shit out of the bomb and I loved it, considering it was probably the biggest hit he’s had with the Yankees thus far. It’s been tough sledding for the Jersey boy while in Pinstripes, as he’s hitting a .216/.354/.759 triple slash with just eight homers and 23 RBIs in 44 games since coming over from the White Sox. Good for Todd to have a little moment last night.

The moment of the night came just after they showed Frazier high fiving his teammates in the dugout, the camera panned to a fan in the stands who gave just an all time thumbs down.

Just an unbelievable thumbs down from this fan, who I’m guessing is a Rays fan. I actually didn’t think these guys existed outside of Tampa Bay, but I was proven wrong once again. This fan was #DONE with this baseball game. Todd Frazier hitting bombs in his face, NOPE, this guy was not having any of that. This guy’s thumbs down is gonna be used for the rest of time and I’m here for all of it.

Clem’s Editor’s Note: I feel like there’s a good chance this guy is a Mets fan that just wanted to see some “Meaningful games in September” at Citi Field and simply hates the fuck out of the Yankees. I’ve seen that look of defeat and slow boiling anger in the faces of my Mets fan brethren more times than I can count. Regardless, it was an A++++ reaction and instantly becomes a part of everyone’s meme rotation on Twitter. That thumbs down rings out 100 times louder than any heckler’s scream ever could.

Tonight Sonny Gray takes the mound against Blake Snell. I’m going to the game, but sitting by myself because I drunkenly bought these $25 tickets on Saturday not thinking twice about it. We’ll see how it plays out for them Cotton. Three back of the division while four up in the 1st spot in the Wild Card, I like the position they’re in right now.

P.S. Jacoby Ellsbury broke one of the weirder records in baseball last night, Pete Rose’s catcher’s inference record of 29. I don’t actually understand how he continues to do this shit, but it’s hilarious.