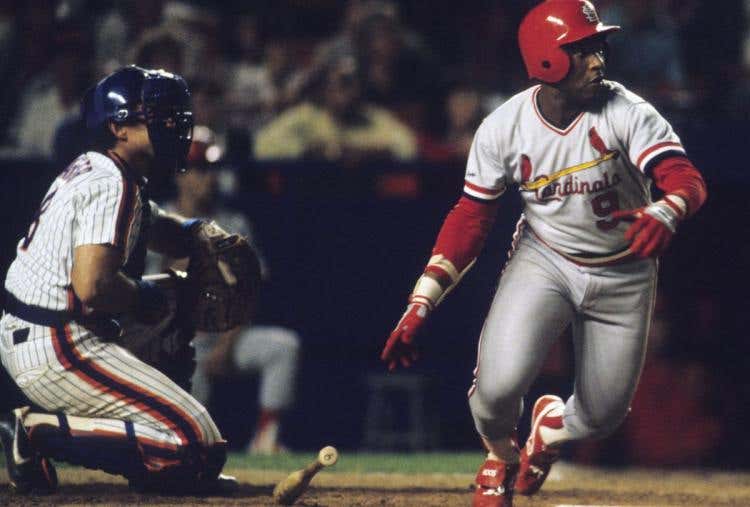 The New York Mets begin a key three-game series with the St. Louis Cardinals at Shea Stadium with a game and a half of first place after trailing by as many as ten and a half in July. With a chance to close the game to a half game, the Mets blow a three-run lead in the ninth inning on a home run by Terry Pendleton and lose in ten innings 6-4.

After winning their second World Championship, the New York Mets looked primed for a dynasty. However, as spring training came to when things began to fall apart as their ace Dwight Gooden checked into drug rehabilitation for cocaine addiction, causing him to miss the first two months of the season. It would be the first of a series of injuries to affect the Mets pitching staff all season. At one point during the season, every starting pitcher was on the disabled list beginning with Gooden’s trip to rehab. Things got so bad with the Mets starting staff, that Tom Seaver attempted a comeback, but retired after struggling with the Tidewater Tides. As the Mets struggled early, the St. Louis Cardinals built a ten and a half game lead in July. The Mets though playing strong baseball after the All-Star Break began to chip away at the Cardinals lead, and by the time St. Louis came to Shea Stadium for a weekend series in September had cut the deficit to a game and half the closest the Mets had been since the start of May.

Early on things looked good for the Mets as Ron Darling the only pitcher who healthy all season was on the mound, and pitching well coming into the game. In the first inning, the Mets scored three runs, with Darryl Strawberry following a Keith Hernandez running scoring double with a home run with a two-run blast off Mets tormentor John Tudor. The Cardinals would answer in the second inning, scoring a run without a hit, but the Mets remained in control thanks to a Mookie Wilson home run in the bottom of the inning. Ron Darling would not allow a hit until the sixth inning when Vince Coleman reached on a bunt single. On the play, Darling injured his thumb, though he would finish the inning and start the seventh inning. His final line was six innings, allowing one run, one hit while striking out four with five walks. Randy Myers would pitch a perfect inning in the seventh, as Roger McDowell came on in the eighth inning with the Mets holding a 4-1 lead. After getting into trouble in the eighth, McDowell induced an inning ending double play to keep the Mets in control of the game. Looking to close out the win and get the Mets to within a half game for the first time since April 25th, Roger McDowell walked Ozzie Smith to lead off the ninth. After Tommy Herr bounced out to first and Dan Driessen struck out, Willie McGee delivered a two out single to score Ozzie and keep the Cardinals hopes alive. Next up was Terry Pendleton who tied the game with a two-run homer to Centerfield. The ball landed near the Mets players parking lot in a car that Ron Darling was getting into to have his thumb examined. The Mets were unable to score against Ken Daley in the ninth, leaving two runners on base. In the tenth inning, the Cardinals scored a pair off Jesse Orosco with Herr and Driessen getting RBIs to take the lead 6-4. In the bottom of the inning, the Mets went down in order, losing 6-4.

The loss would be the backbreaker for the Mets, as they never were in a position to draw any closer to the Cardinals, who went on to represent the National League in the World Series. Ron Darling would miss the rest of the season with a thumb injury, but the Mets still managed a respectable finishing, posting a record of 92-70 to finish in second place, three games in back of St. Louis. It was the fourth straight season that the Mets won at least 90 games.