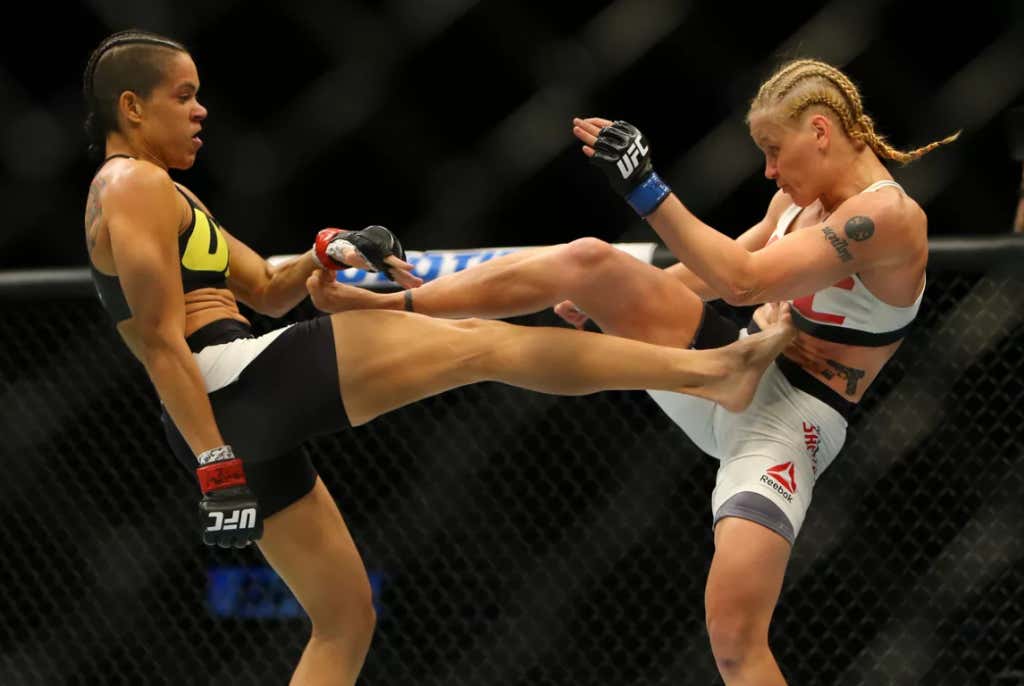 After a long layoff to make room for the “Biggest Fight in Combat Sports History”, the UFC is finally back! Sure, they were kinda back last week, but it was a Fight Pass Exclusive card from the Netherlands that nobody watched (it was pretty good though) so now they’re officially back with UFC 215! I’ll be here to break down the fights for you, and as always, don’t bet on my picks unless I explicitly say to, because I’m an idiot with a ‘meh’ record!

Tonight’s main event of Demetrious “Mighty Mouse” Johnson vs Ray Borg for the UFC Flyweight Championship has been cancelled due to Ray Borg coming down with an illness. I wrote about that yesterday, you can read more here. Amanda Nunes vs Valentina Shevchenko for the UFC Women’s Bantamweight Championship will now main event, and Henry Cejudo vs Wilson Reis has been promoted to the main card. 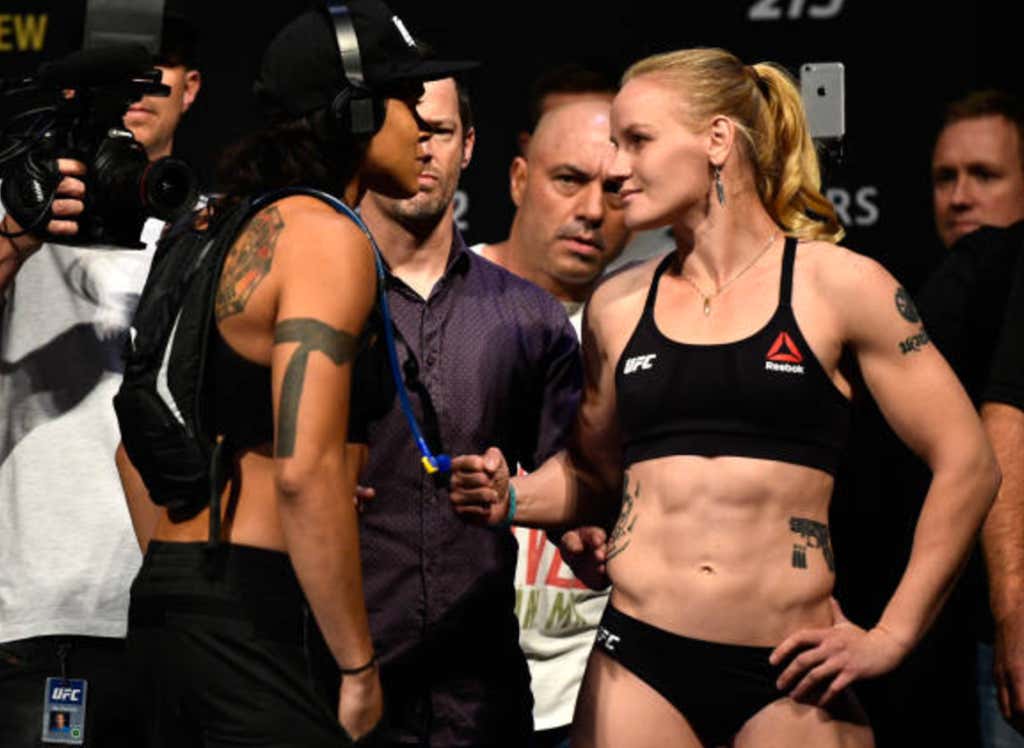 Here’s what I wrote about this fight when it was originally scheduled for UFC 213:

Our main event here is a classic brawler champion vs technician challenger battle. It’s a really, REALLY good fight, and while it happened fairly recently, I think Valentina (who came out on the losing end of the March encounter) has become a changed fighter. She’s got an incredibly dominant win over Holly Holm and a quick submission win over Julianna Pena since that loss, and has the confidence of a young Bob. Amanda Nunes however has killed both Miesha Tate and Ronda Rousey since, and this is actually the first Women’s Bantamweight Championship fight to not feature either of those women since 2011 in Strikeforce. Time will be the story here, because if Shevchenko can endure Nunes’ output in the opening rounds, she should win. Nunes gasses badly, and has never been into championship rounds in her life. She hasn’t been to the second round in over a year. I personally don’t think Valentina will survive those opening rounds, though, because Nunes has found her reach, found her game, and became a fucking POWERHOUSE of a hitter. Even if a knockout doesn’t happen, as Valentina hasn’t been KO’d/TKO’d in seven years, she could get dropped and the ground game favors the Brazilian Jiu Jitsu Black Belt.

My opinions haven’t changed much since then, but I went back and watched their last fight again, and I am of the belief that Shevchenko probably would have won that if it went 2 more rounds, so that fucked with my head. I don’t know why I thought Shevchenko would get finished early a few months back when we clearly saw she took the worst of what Nunes had to offer and endured it, either, so I’m officially stepping in and CHANGING my prediction for this fight. Nunes will have high volume in the opening one two rounds, Valentina will endure and stay composed, and take over in the deep water.

The Bullet will have a golden casing after tonight. She’s simply the better all-around fighter, and that’s what the division has been longing for. 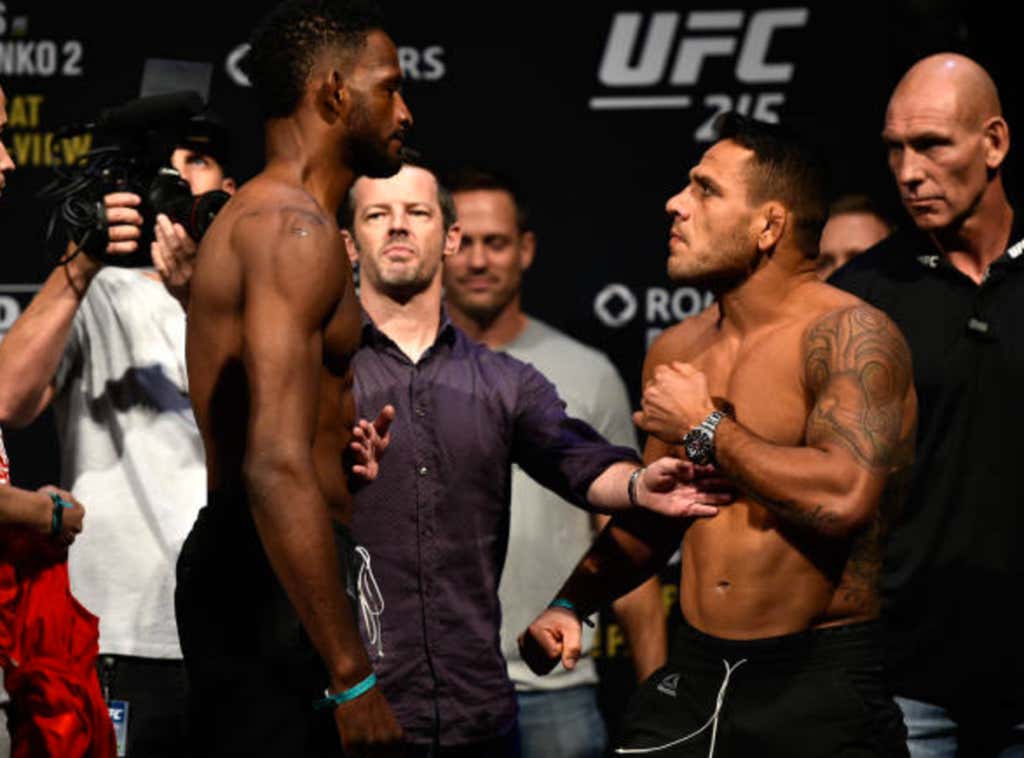 I know, I know, “The guy on the left is so much bigger! How are these guys in the same weight division?!” Rafael Dos Anjos (on the right) is a former UFC Lightweight World Champion, now making a run at Welterweight, so he’s prone to be smaller than a lot of his upcoming opponents. He’s 6 inches shorter than Magny tonight, with a 10 inch reach disadvantage, but I still expect him to go out there and get the job done fairly easily. He’s a much superior grappler than Magny, and DANGEROUS on his feet. He’ll look to walk Neil down, put the pressure on, hit a nice double leg while Magny is in danger, and then show us what his black belt is made of. It’s not absurd to say Magny’s got a shot, however, because he’s a great fighter and a real threat in the clinch due to his length. I just can’t see his size advantage being a massive enough factor to win without a good jab, though, and he does NOT have a good jab. RDA should be looking at a title shot if he wins here. 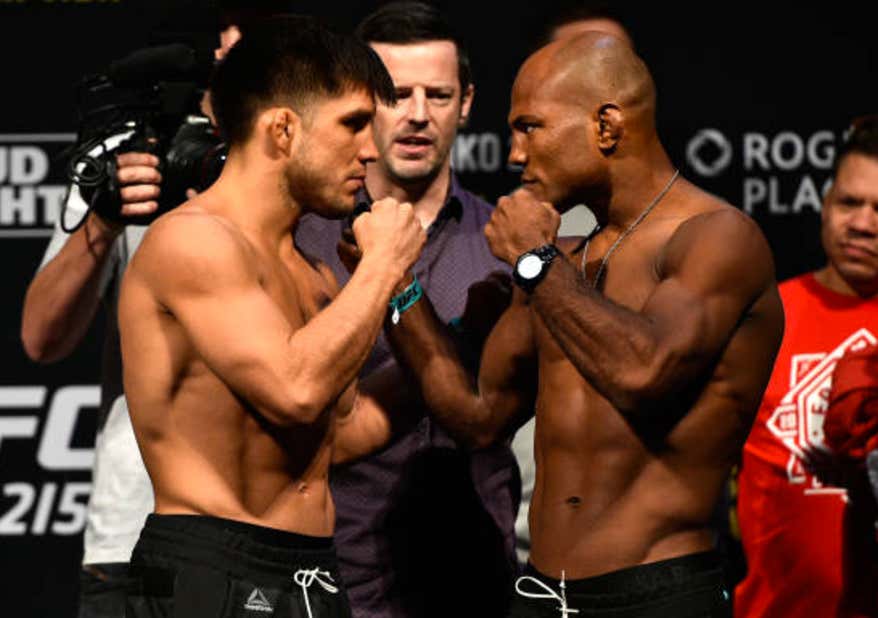 This one don’t require much breakdown from me, and the lines show that. Henry Cejudo and Wilson Reis are two men that made their way to the top of the hill only to be thrown right the fuck off by Mighty Mouse, and now they’ve got each other to fight. Cejudo was finished much more dominantly by Johnson, but as we all know, MMA Math doesn’t exist, and he’s just so much better than Reis all around. He should have an easy decision win tonight.

Side note: I saw some people claiming Mighty Mouse shouldn’t be taken seriously because he hasn’t faced any real opponents yesterday. Those people are fucking morons. The Flyweight division is arguably the most stacked division in the company and anyone who knows anything will tell you that. 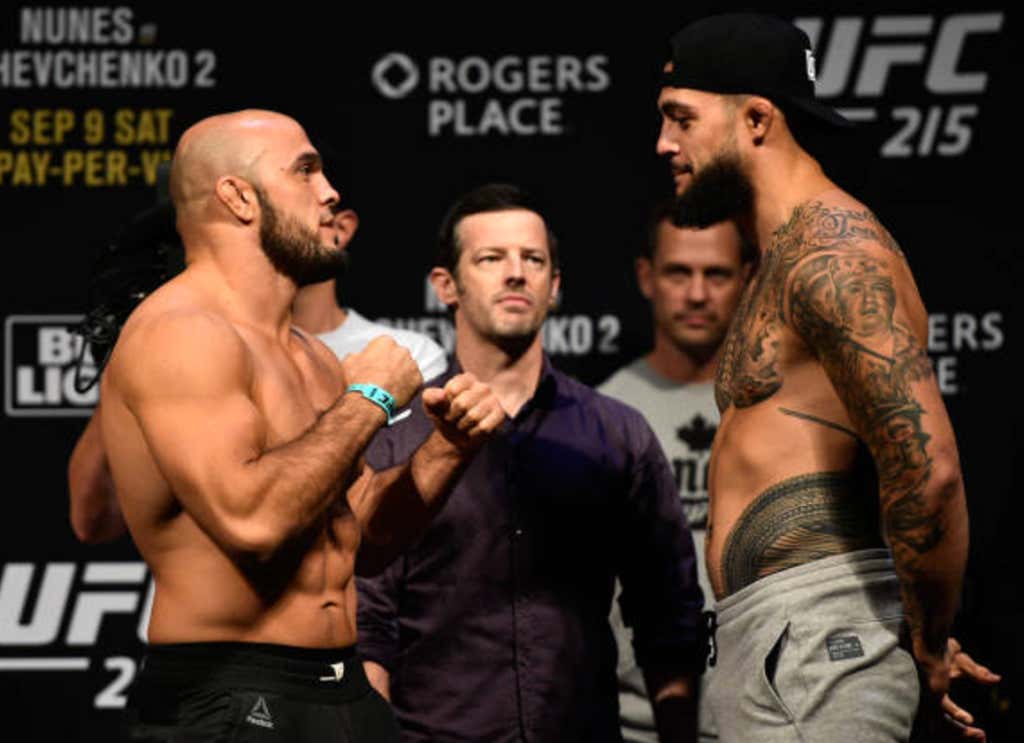 This fight is really intriguing to me and I’m gonna tell you why. We’ve got Ilir “The Sledgehammer” Latifi going up against an undefeated newcomer in Tyson Pedro. Tyson Pedro has been nothing short of exciting in every fight he’s had, and displayed some great jiu jitsu making him appear to be a real threat to this division. Ilir Latifi has this picture of him on a horse once… 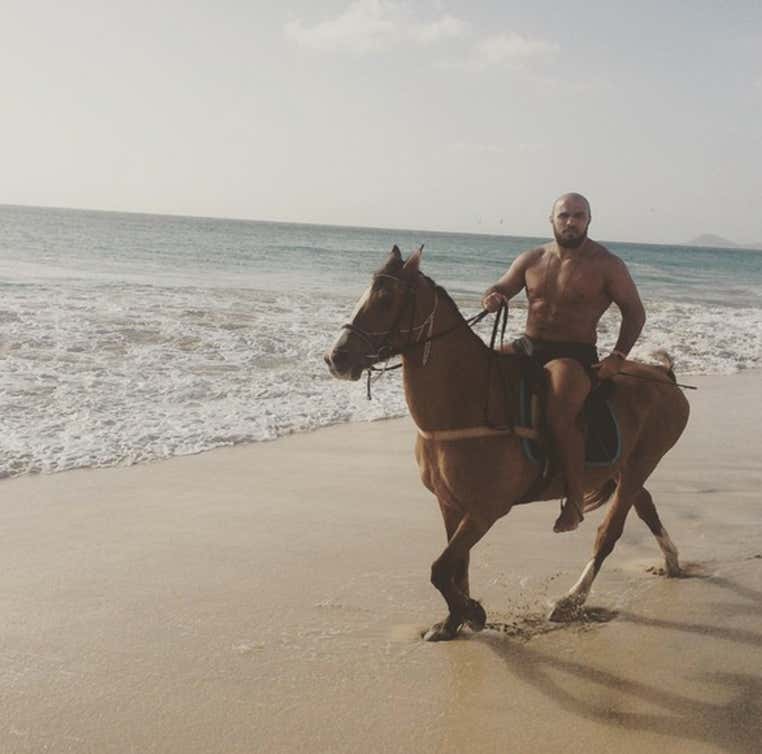 …and because of that, I’m going with The Sledgehammer. 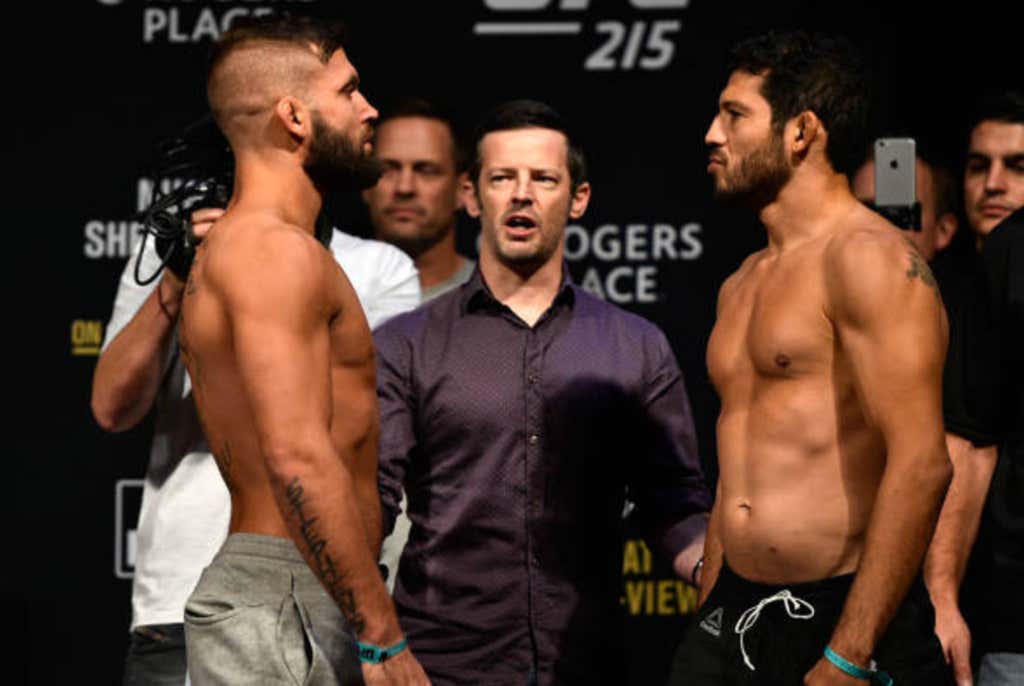 Jeremy Stephens postponed his wedding to take this fight. That’s the big narrative over the whole damn thing. It’s all I’m hearing about. Seriously, just google “Jeremy Stephens” and everyone’s like “THAT MAN POSTPONED THE GREATEST DAY OF HIS LIFE TO TAKE THIS FIGHT. WHAT A GOD DAMN WARRIOR.”

Nah, fam. He’s a dope. Gilbert Melendez is gonna beat him here solely based on the fact that he never does anything without it blowing up in his face. See: confronting Conor McGregor…

That’s it for me. Be sure to follow along with the event with me on Twitter if you’ll be watching. We’ll make this kinda shitty card a good time.