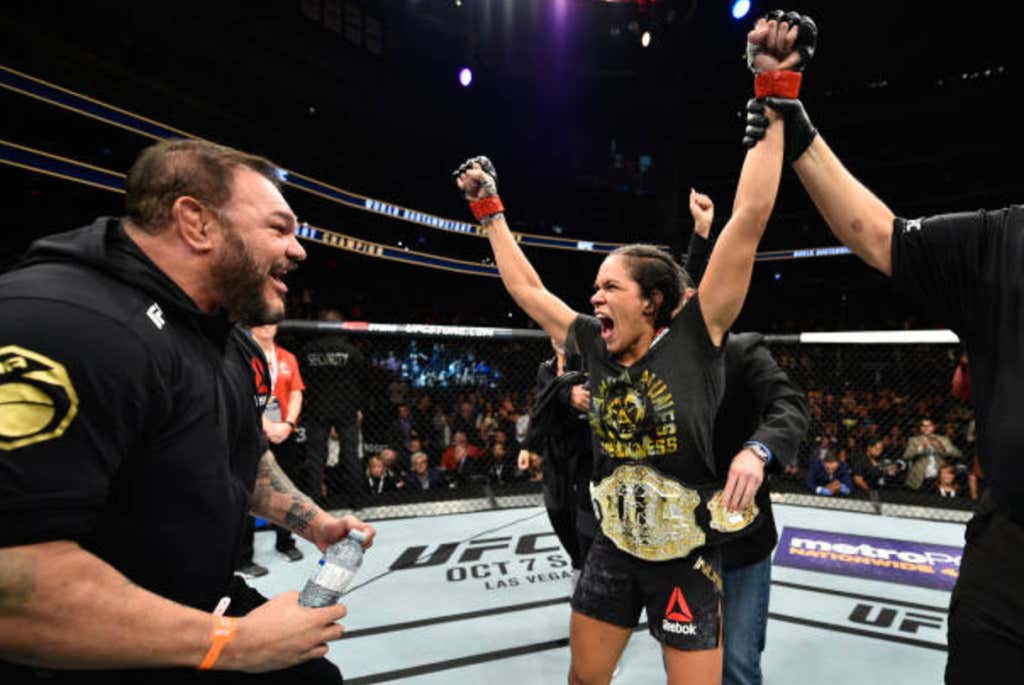 UFC 215 came and went over the weekend, quietly as ever, due mostly to it’s lack of star power, promotion, and well…the whole fuckin’ card fell apart. BUT, I thought the fights were pretty exciting from the FS1 prelims all the way to the pay per view main event.

As you may/may not know, the originally scheduled main of Demetrius Johnson vs Ray Borg for the UFC Flyweight Championship was cancelled, so Amanda Nunes vs Valentina Shevchenko was promoted to the headlining spot. In a relatively new division in a relatively new sport, this was probably the most skilled matchup in Women’s Bantamweight history, but you wouldn’t know it from the piss poor fight promotion.

It didn’t wind up being the fight anyone expected. Amanda Nunes didn’t come out of her corner thirsty for blood. She didn’t brawl for two rounds, gas, and allow Shevchenko to take over. She didn’t knock Shevchenko into bolivian. Instead, she did what nobody thought she could. She competed in a technical striking match with Valentina for five rounds, and won via split decision. I scored the fight 48-47 in favor of the champ, but honestly, it could have gone either way. Rounds 4 and 5 were the only truly decisive ones for me, with 4 going to Shevchenko and 5 going to Nunes. Everything before that was a crapshoot, because these two mixed martial artists are at the top of their game, and they had all of the tools to cancel each other out. A few takedowns in the final round after a crucial mistake by the challenger seemed to be the difference maker in many’s minds, but not in Rogers Place. They were pissed along with Shevchenko (who needs to understand her style puts faith in the judges hands more often than not). They shouldn’t have been, because even if you didn’t enjoy the main event, the rest of the card overdelivered.

In the co-main event, former UFC Lightweight Champion Rafael dos Anjos MAULED Neil Magny, putting him in a great spot in the currently weird division. If I had to guess, he’ll get the next shot at Tyron Woodley’s crown, and while the 170 Champ has been a really boring, hesitant fighter recently, I think Dos Anjos could change that and bring back explosive Woodley.

Before that, we had an even MORE dominant performance from Henry Cejudo over Wilson Reis, as I expected. It was just actually a bit shocking how good Cejudo looked when you remember how easily Mighty Mouse disposed of him.

The Sledgehammer picked up a good win over Tyson Pedro, and Jeremy Stephens escaped his fiance’s murder by winning the fight he postponed his wedding for, blowing up Gilbert Melendez’s leg in the process…

Oh, and Gavin Tucker was completely mauled beyond repair by Rick Glenn while the ref just stood there, not giving a fuck. It was one of the worst non-stoppages ever, and shame on his corner for not throwing the fucking towel. He’s got four broken bones in his face.

Finally, I want to wrap this blog up with a shockingly savage comment from Sarah Moras after winning her fight via armbar…