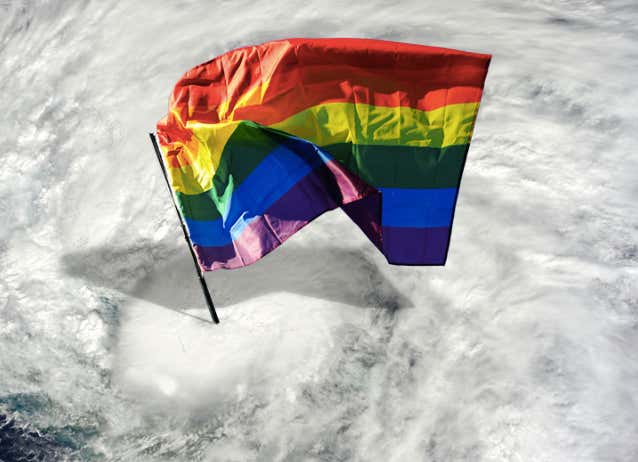 Source - A number of Christian leaders have blamed LGBT people for causing Hurricane Harvey. Despite overwhelming evidence that supports climate change as a factor in the devastating storm and subsequent flooding, a handful of evangelical leaders have ludicrously suggested the LGBT community are to blame.

“Jesus sends the message home, unless Americans repent, unless Houston repents, unless New Orleans repents, they will all likewise perish,” he told his radio show. “That is the message that the Lord Jesus Christ is sending home right now to America.”

“Here’s a city that has boasted of its LGBT devotion, its affinity for the sexual perversion movement in America. They’re underwater,” he said.

Ann Coulter, right wing media pundit and climate change sceptic, also weighed in to the debate. “I don’t believe Hurricane Harvey is God’s punishment for Houston electing a lesbian mayor. But that is more credible than ‘climate change’,” she wrote on Twitter.

Every group of people has a few bad apples that make the rest of them look bad. For evangelicals, it’s Kevin Swanson and Rick Wiles. I’ll get to human scarecrow Ann Coulter later. Men like Kevin and Rick are particularly disgusting. They usually wait until people are vulnerable to spew their hatred. They thrive on the chaos and confusion created by disaster. Instead of using their platform to bring people together, they divide them for personal gain. However short-lived that gain may be. It’s a vile and opportunistic existence. Even more so, considering the people being attacked are no doubt involved in the relief efforts. Fortunately they’re in the shrinking minority.

I was going to do a full blown roast of Rick and Kevin. Go on and on about how Kevin looks like he smells like pee and how Rick is a poor man’s Michael Douglas except people actually WANT this one to get throat cancer but I won’t do it. I’m not going to make veiled statements about their sexuality and how I’d love to see their browsing history. Even though there’s an abundance of material I will not sink to their level. It’s God’s job to judge them not mine. My only suggestion is that they tread lightly, others may not be so nice. Best of luck, guys.