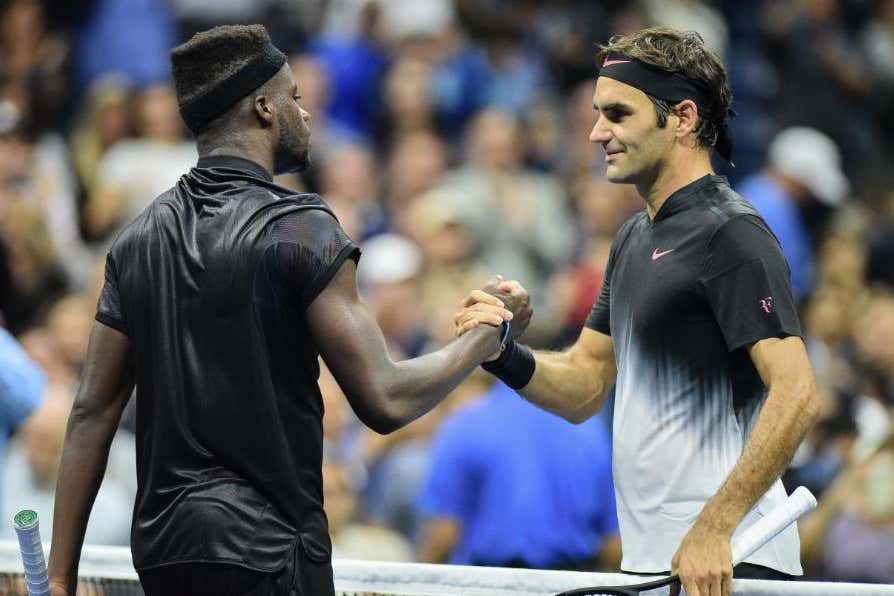 Tuesday at the US Open was filled with mostly postponed matches due to a washed out day of rain in New York City. Only a few matches were able to be played under the new roof at Arthur Ashe Stadium, including Rafa Nadal and Roger Federer. Fed was the last to step on the court, a little after 9 PM against 19 year old up and coming American Frances Tiafoe. Of the next wave of hopeful American tennis stars, Tiafoe has broken away from the pack as the rising star. He’s still only 19 years old though, so it wasn’t expected of him to give Fed much competition, as Roger entered the match as a -3000 favorite. Tiafoe had recently beaten rising phenom Alexander Zverev at the Cincy Masters (4th overall seed at the US Open) so he had a bit of momentum rolling into the match. It certainly showed.

Federer came out sluggish, losing his first service game, while Tiafoe looked fired up and full of energy. His rocket forehand gave Roger all kinds of trouble early on and before you know it, the 19 year old had claimed the first set. It was nothing short of stunning.

Federer came out in the second set composed and aggressive. Obviously the teenager taking the first set of his 2017 US Open was a wake up call to get his shit together. He started to let Tiafoe make all the mistakes and just play his game. By the end of the set Fed was looking like his old self and took back control of the match.

Federer broke early in the 3rd set and really started to look settled in. We got a classic Federer rally early on after he went up the break.

And then all of a sudden when you expected the kid to lie down and lose in four sets, he caught a second wind and fired right back at Fed. It was fucking impressive, and before you knew it he had Roger on his heals with no answer for the explosive firepower once again.

Tiafoe’s awkward mechanics but explosive results are going to be a problem for everyone on Tour moving forward. He’s easily the brightest star who has separated himself from the pack of up and coming Americans in the sport (Taylor Fritz, Reilly Opelka, etc.) Anyways, we had a fifth fucking set to play. God forbid I could get a good night’s sleep one time with the Yankees game cancelled. NOPE, why would that happen?

Many expected Roger to come out locked in and dominate the fifth set, and for the opening stages it looked like that was exactly what was going to happen. Rog’s serve was at championship level in his first few service games and eventually he got the break that appeared to seal the deal. Serving for the match at 5-3, Federer allowed Tiafoe to get to deuce and at that point, the 19 year old hit the shot of the match.

It was absolutely ridiculous. Federer had never lost an opening round at the US Open before, but he was only a few games away from having a tiebreak decide his fate. Luckily for the Swiss King after the commercial break Tiafoe came out too fired up. He over-hit his forehands in his attempt to consolidate the break and as a result Federer watched as the match was handed to him.

The atmosphere was crazy and very Pro-Fed which comes at no surprise. It was extremely loud with the roof closed which clearly bothered players such as Nadal throughout the day. Huge credit to the 19 year old American teenager Frances Tiafoe for playing the match of his life, taking the GOAT to five sets. Just when you thought his adrenaline was running out, he would battle back and push the envelope. As my pal Riggsy said here, America needs a sick tennis player once again.

With Tiafoe being only 19, it’s obvious he’s our bright spot looking out on the horizon. As for Roger, this was a great test out of the gates for is health which was a slight concern heading in. It’s clear his back held up just fine and hopefully isn’t an issue going forward. He’ll get the day off today as his 2nd round opponent has yet to play in the first round because of the rain.

P.S. If you’re going to get butt hurt because Roger Federer had the crowd cheering for him in the fifth set then I can’t help you. He’s the GOAT, he’ll have the crowd on his side every single day on American soil until he retires.