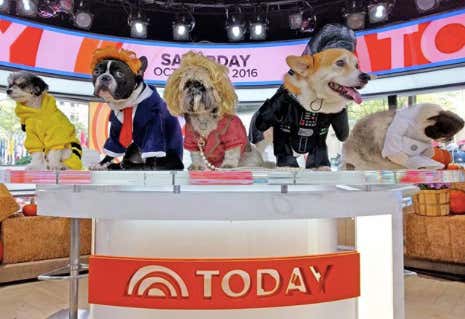 Source - Manny the french bulldog has achieved a lot for a six year old. He’s a philanthropist and social media influencer with more than a million followers on Instagram, including Snoop Dogg and Martha Stewart. He’s appeared on Good Morning America and had his own booth at a music festival. He has numerous licensing and sponsorship deals with brands like Turtle Wax and Dremel.

The money pet influencers can make from sponsorships varies based on follower count, but it can be a cash cow. Pets with a comparable number of followers to Manny can make anywhere from $10,000 to $15,000 per sponsored post, according to Edwards. Those with a couple hundred thousand followers are making $3,000 to $5,000 per piece of sponsored content, while those in the millions make $10,000 to $15,000.”

Corporate partnerships and appearances aren’t the only ways these pets make money. Toast and Manny both have book deals and merchandise available in their online stores.

Of course, it’s not all take, take, take. The humans behind the Insta pets generally use the social media platforms to give back where possible.

“Manny is known as the most philanthropic pet celebrity in the world,”Huang says. It’s a grand claim, but he insists that they’ve donated some $105,000 to various charitable causes. The proceeds from Manny’s merchandise go to animal rescue organizations and the pair purchased a new van for an animal shelter.

Exploitation! These dogs are working their ASSES off and what do they get in return? A treat? Give me a break. Look at this poor thing. 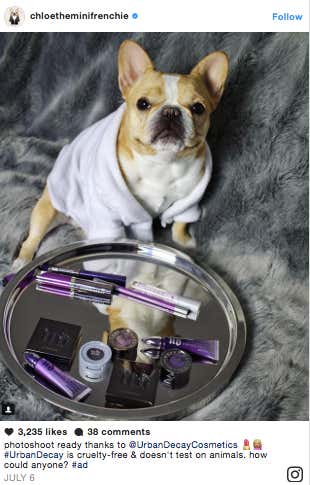 Probably sat through hours of glam all for a God damn milk bone. He loves milk bones but that’s not the point. Dogs should be rolling in shit and nosing through trash not posing with makeup kits. I hope their humans are sharing profits. Fifteen thousand dollars is fuck you money for a dog. Enough food for a lifetime. The whole thing leaves a bad taste in my mouth. Humans trying to pass them off Philanthro-pups to make themselves feel good. I want to see receipts. It’s worse than the modeling industry. Toast and Manny are like two years old and already show signs of industry damage. 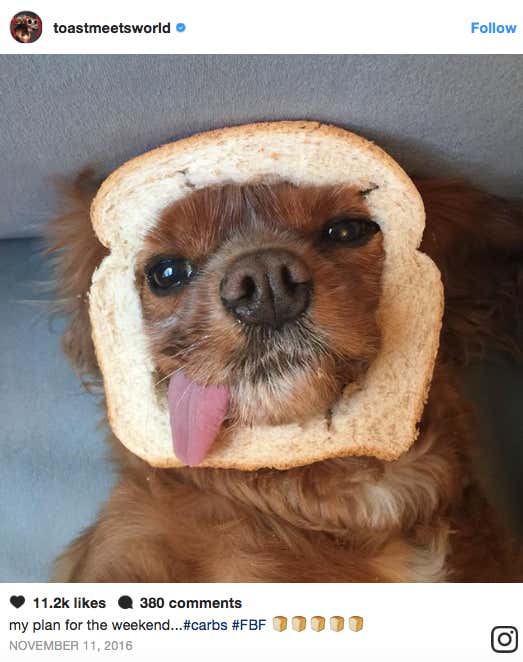 Poor guy. These dogs aren’t influencers they’re slaves. Stuck in the game with no way out.

HOWEVA *sprints to nearest adoption center* I’d be lying if I said I wouldn’t do the exact same thing. My dog would be working over time. I’m surprised they don’t make more. Everyone loves insta-dogs. It’s my entire feed. I don’t even like human pictures anymore, just dogs. I had no idea my double taps were making them rich.