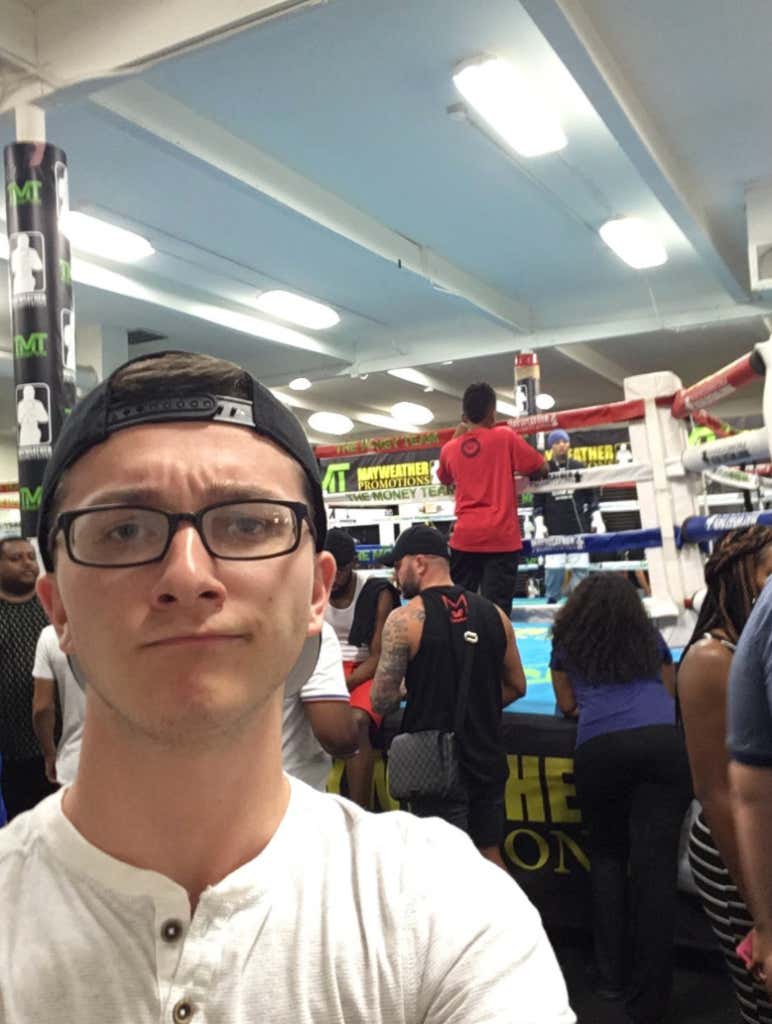 Yep, that’s me. The biggest Conor McGregor nuthugger on the planet, giving Floyd Mayweather and his Boxing Club a prep school face at the final private workout of his career, for members of The Money Team only. You’re probably wondering how I wound up there.

It started at 7am on Thursday, August 24th. I woke up after getting about an hour and a half of sleep and started getting ready for the day’s session of Barstool Radio. I mention that I got so little sleep not to complain, but just for you guys to get an idea of how nonstop this week has been in Vegas. We are going and going and going at a million miles per hour.

The Mayweather/McGregor Media Center that radio row takes place in didn’t quite have the same food spread as yesterday, but we powered through and did our show anyway. We were pretty all over the place topic-wise and we went through some shitty technical issues that put the show on a weird pace, but when UFC Flyweight Champion Demetrious “Mighty Mouse” Johnson joined at the top of the second hour, things seemed to fall into place more and we ran a tighter ship.

Dave told me last night that he thought he could beat up Mighty Mouse because of the weight advantage he had on him, but instantly took it back when seeing the champ in person. It was a hilarious change of opinion that has to be heard.

We also talked about special skills to impress girls, and Dave’s wound up being a some kinda voodoo egg crack massage trick.

After we signed off on Sirius, we hit up Top Shot Gun Range to shoot a video I’ve been planning since seeing Conor McGregor shoot his friends with guns in extreme laser tag earlier this week.

What is extreme laser tag, you ask?

Yep, that’s right. Real guns firing blanks, and if you get shot, a painful shock gets sent through your stomach. I don’t think anyone was completely sold on this being a funny video idea, but when we got there and got into it, we all had a great time. We got to use real guns firing blanks in Time Crisis type video game simulations for about a half hour, then went into the “Gun Battle”. The full video will hopefully be out later today, but I’ll tell you this now…in the final battle, Pres and I took on Young and Happy, and since I “dragged everyone along” they made me put my shock belt on the highest level of pain possible. It hurt like a motherfucker all TEN TIMES I got shot, but I regret nothing because I think it’s gonna make for a great video.

Caleb, Rone, our cameraman John, and I went to Rollin Smoke Barbeque for food afterwards, and while the food was delicious, one of us had a slightly problematic meal.

Yep, that’s right. Not a big deal at all for Caleb that a grasshopper just jumped out of his sandwich onto the table. He went right back into that sandwich instantly and didn’t skip a beat. Rone and I were appalled.

They went off and did their thing, and I went off and did mine, which was a video based around the fact that there’s not much to do in Sin City if you’re not 21 years old. Like the laser tag video, that should be ready to put out today, so please keep an eye out for it. Part of the video required the “Welcome To Las Vegas” sign to be in the background of a shot, and let me tell you that is the most overrated touristy landmark on planet earth. It’s 2 feet tall in the middle of a shitty highway and there are LINES of people just waiting to get a picture in front of it.

I then went to the MGM Grand to meet up with Big Cat, PFT, Hank, and Intern Liam, and we headed over to The Mirage for the night’s live Pardon My Take where I was invited to read Jimbos. Like fifty AWLs showed up on an hour’s notice and got to sit-in on a live podcast in the casino’s sportsbook. It was a blast and an honor to be invited on the show and to meet such cool guys and girls who enjoy what we do, reminding us why we do it. If you were there and you’re reading this, thanks so much for coming out and saying hey. If you weren’t there and you’re reading this, step your game up.

When we finished Pardon My Take I came back to my hotel room at the Aria and started writing this blog. I figured my day was over so I’d crank out my behind the scenes blog and go to bed early. One sentence into this blog, I got a text that said “Floyd Mayweather is at his gym holding a private workout, do you want to come?”

Obviously I said yes, and asked if I could wear my 49-1 shirt, but the response that I got was a heavy hearted “You will die tonight”. I cabbed over as fast as I could, and walked right in like I owned the place, which is ironic because I’ve never been more OUT OF PLACE.. Floyd was just wrapping up as I was getting there, AKA he heard my footsteps and ran scared. He looked real sharp though, and was hitting the heavy bag with tremendous power.

I ran into Michael Rappaport at the workout too, who had no idea who I was and thought I was secretly filming him when I was actually just FaceTiming Young Pageviews.

Now we’re right back here, right back to where we started at the Aria, waiting around for another magical text inviting me to a Conor McGregor pizza party or something. Maybe it’ll come through, maybe it won’t, but I can tell you this right now, if it does, you’ll be the first to know. Only on Barstool Behind The Scenes.