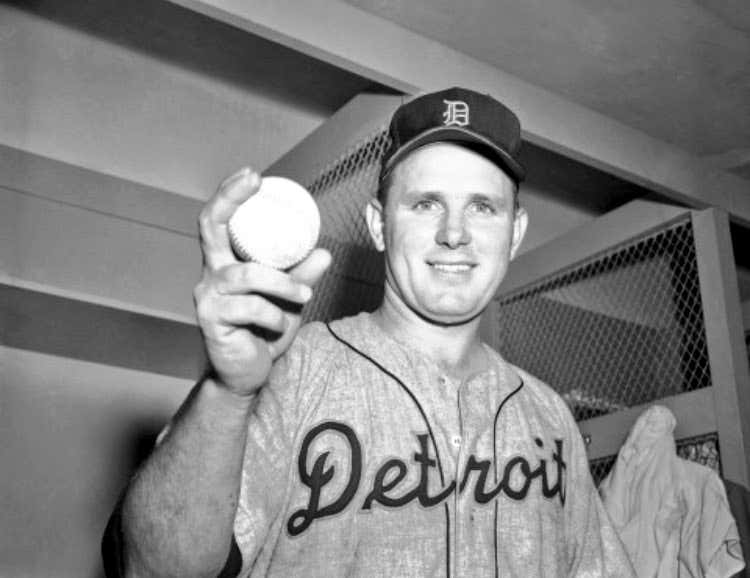 Virgil Trucks of the Detroit Tigers after throwing his second No Hitter in 1952.

Virgil Trucks of the Detroit Tigers throws his second No Hitter of the season, blanking the New York Yankees 1-0 in the Bronx. He had previously thrown a No Hitter on May 15th against the Washington Senators at home. Trucks in the third pitcher to throw two No Hitters in a season, making the feat even more remarkable is that the season was otherwise a disaster for Virgil Trucks who posted a record of 5-19.

Virgil Trucks was born on April 26, 1917, in Birmingham, Alabama. After debuting with the Detroit Tigers at the end of 1941, Trucks became one of Detroit’s top hurlers in his rookie season posting a record of 14-8 with an ERA of 2.74. After posting a record of 16-10 with a 2.84 ERA in his second season, Trucks spent two years in the Navy, returning just in time to pitch in the 1945 World Series where he earned the win in Game 2 as the Tigers beat the Chicago Cubs in seven games. Over the next six seasons, Virgil Trucks resumed his spot among the Tigers top hurlers. In 1949, he was an All-Star for the first time posting a record of 19-11, while leading the American League with six shutouts.

The 1952 season was a year to forget in Detroit as the Tigers lost a then franchise record 104 games and finished in last place. Virgil Trucks, who had missed most of the 1950 season with an arm injury was looking to repeat the strong season he had in 1951. However, his season like the Tigers started poorly as he allowed 16 runs on 30 hits in his first four starts. In his fifth start against the Washington Senators at Briggs Stadium on May 15th, Trucks looked like an All-Star as he did not allow a hit through the first nine innings. Trucks despite pitching for history did not have a win as he sat in the dugout of a scoreless game in the bottom ninth inning. That all changed with two outs as Vic Wertz hit a walk off home run off Bob Porterfield to win the game 1-0. As Wertz circled the bases, Trucks was mobbed in the dugout. It was the first time a No Hitter was completed with a walk off home in a scoreless game.

The No Hitter did little to improve the fortunes of Virgil Trucks, who pitched mostly in hard luck on a bad Tigers team. When he faced the Yankees on the road on August 25, Trucks was saddled with a record of 4-15, despite a solid 3.55 ERA. Besides his no hitter, Virgil Trucks had thrown a one hitter and a two-hitter showing he was still capable of a great performance at any time. For most of the afternoon, it did not appear that Trucks was driving towards history. In the third inning, Phil Rizzuto reached base on a ball off the glove of Tigers Shortstop Johnny Pesky. The play was originally called an error but reversed it to a base hit. Finally, in the eighth inning, official scorer John Drebinger made the final decision and called an error which was met with rousing cheers at Yankee Stadium, with fans not wanting to see a chance of history lost on a cheap questionable hit. By the time the call was reversed again the Tigers scratched out a run in the seventh inning with Bud Souchock singling home Walt Dropo who doubled one batter earlier. With history in his grasp, Virgil Trucks faced the top of the Yankees order. After striking out Mickey Mantle, Trucks got Joe Collins on a lineout to center, while Hank Bauer grounded out to second to end the game 1-0. Trucks would not win another game the rest of the season, finishing with a record of 5-19 with a 3.97 ERA.

Virgil Trucks would leave the Tigers following the season, he split the 1953 season between the St. Louis Browns and Chicago White Sox, winning a total of 20 games. Trucks would pitch he was on to the American League All-Star team with the White Sox in 1954, posting a record of 19-12. In the final years of his career, Trucks returned to Detroit and pitched with the Kanas City Athletics, before ending his career with the Yankees in 1958. For his career, Virgil Trucks finished with a record of 177-135 with an ERA of 3.39.