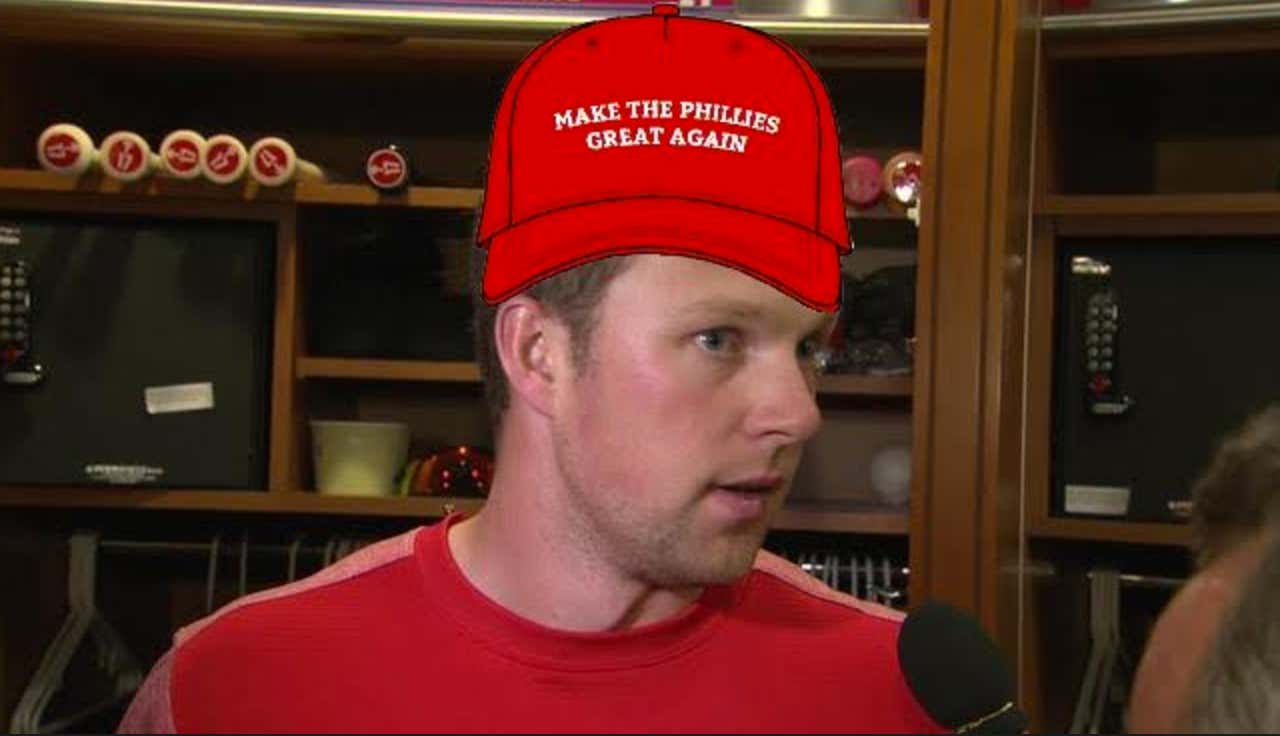 So, this @RhysHoskins22 thing is getting pretty nuts. #Crushed pic.twitter.com/BRAvmxQuBe

The word around baseball is that this Rhys Hoskins guy is the next Marla Hooch of the National League. What a hitter! I love this man. I love everything about him. How he wears his ‘Make The Phillies Great Again’ hat to the side like a pimp. His style and grace at the plate. His patience to turn an 0-2 count into a mammoth 3-run home run to the 2nd deck in left field. His 10 RBI so far this series against the Marlins. I love the fact that he has 8 home runs in his first 15 games. But most importantly, I love that this man alone is quickly making baseball in Philadelphia great again.

Allow me to be lazy for a second and discuss Domonic Brown. I say lazy, because I have been accused on twitter multiple times of being lazy for merely mentioning his name when discussing other prospects. Who even remembers Domonic Brown? I sure as hell do. However, I remember him in a different sense than most. Where most of you recall the former #1 prospect as a bigger bust than Paul Finch after a deep tantric session with Stiflers mom, I remember that one glorious month. That month where Domonic Brown had this city by the balls. While our aging veterans were disintegrating before our eyes, here comes our lord and savior blasting dinger after dinger. 14 to be exact over a 36 game stretch.

You see in June 2013, Philly was still a baseball town. The Phillies were only a season a half removed from a 102 win season and were convinced their 2008 World Series roster still had a shot to compete 5 years later. Even some of us homers were convinced, including me! Hell, I would have given Utley, Chooch, Halladay, Rollins, Hamels and Lee all contract extensions. However, none of these nostalgic, world series bound feelings about a team of over-payed senior citizens would have manifested without that glorious month from Dom Brown.

Why do we continue to revel in that name, Dom Brown? Personally, I cherish the name because his first half of 2013 was the last time I remember adoring Phillies baseball. The lucky few who follow me on Twitter, I hope you don’t read too much into my pessimism. It’s just that I’ve had nothing else to hold onto with this team, except disdain. Finally, 4 years later, it looks like we may have our Aaron Judge, Mike Trout, Bryce Harper, Corey Seager, Fransico Lindor, etc. type player. A player who can once again grab this city by the balls and bring us to a level we have seen in a long time.

The new wave in Philadelphia has begun. The frame of the house that Ruben Amaro built is up. Now It’s time for Matty Klentak and the gang to fill in the brick and mortar.