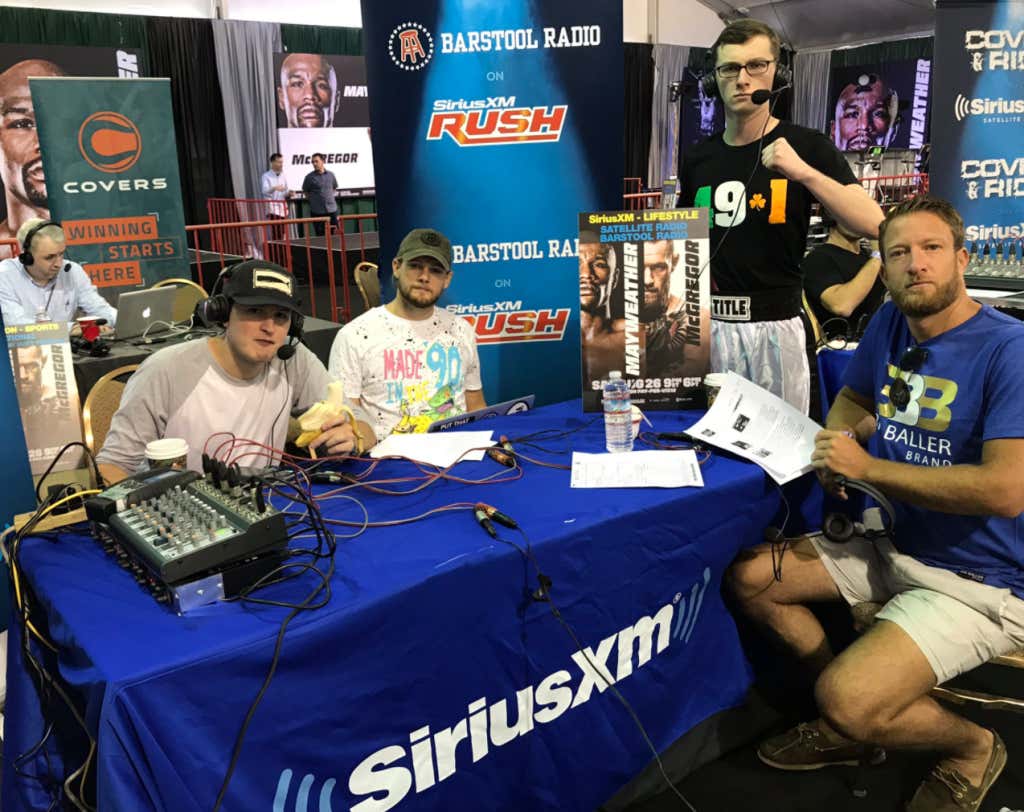 AUTHOR’S NOTE: I was really tired when I wrote this. There might be typos. Deal with it…please.

Hey friends, long time no talk! That’s what it feels like, at least. I haven’t gotten the chance to blog as much as I normally do because I’ve uhhh…I’ve been a bit busy. I’m out in Las Vegas with Dave, Frankie, Caleb, and Rone to host Barstool Radio LIVE from Radio Row at the MGM Grand all week as part of the Mayweather vs McGregor festivities. I know I say it a lot, but it really is a dream come true for me. I’ll elaborate more on this point in my pre-fight blog on Saturday, but do you even realize how cool it is for me that the entire world is talking about the normally niche sport I cover? Like, everyone. Because this week is so special to me, I figured I’d do something a little out of the ordinary: behind-the-scenes morning recaps of every day on the trip. Let’s talk about Day 1…and a half

Dave, Frankie, and I arrived in Sin City on Tuesday night after a dreadful flight with no WiFi, and when we touched down, our phones ran wild like Hulkamania. Dave’s because Kyrie Irving (former teammate of Dave’s arch nemesis Lebron James) had been traded to the Boston Celtics, and mine because that dumb fuck Jon Jones popped another drug test for turinabol, which is a steroid. I thought about blogging it as soon as we got to our hotel but decided against it when I saw Nate already had it covered. There’s really nothing more to say than what he said here, other than “I told you so, you dumb fucks” and I’m not an “I told you so” guy.

We checked in, I was informed all of the alcohol in my suite would be confiscated immediately, and we went to a Hibachi restaurant for dinner. It wound up being more like a steakhouse where they happened to use a Hibachi grill where Dave racked up close to three figures on sides alone. It turned out at this place, the sides (veggies, rice, etc.) were NOT mixed in with everything else. They were served one by one on tiny plates until the main course was ready. It was super fucking weird and kinda hilarious.

Yesterday, I woke up at about 5:30am local time to prep and record this week’s episode of From The Top Rope with Carrabis, featuring The Big Show, which you can listen to HERE. I think the interview was pretty damn informative on the psychology of a “big man” wrestler and I respected Show pulling no punches on the failure that is the Cruiserweight Division.

We then went over to the MGM Grand, picked up our credentials, and entered the media tent for the biggest fight in combat sports history. I was…excited.

…and completely unbiased, of course.

The spread was fantastic, with breakfast burritos, muffins, bagels, donuts, fondue, you name it, they had it. Couldn’t have respected the biz more.

We did our regular two hour block on SiriusXM RUSH 93, and I think it went pretty well. Most of the show was based around whether or not Dave should take me to the fight on Saturday, being he has an extra fourth row ticket and I’m the combat sports guy who’s been covering this fight very closely for months. He told us he’d rather bring a hot girl so he can have sex that night, and I didn’t take too kindly to that. We went to Twitter with a poll, and everyone back at the office had my back, which was awesome.

Dave eventually decided that no matter what, even if he doesn’t bring me, he’ll buy me a ticket in the last row of the building. That was music to my ears, because as much as I was hamming it up for conflict on the radio, I would really just love to be in the building. I’m very aware that I don’t “deserve” that seat next to my boss, and am lucky to have been flown out here in the first place. If I watch the fight from my hotel room I’ll still be happy. It’s hard to make that point and also make for entertaining radio, so I went with the “You’ll be dead to me if you don’t take me!” approach and definitely rubbed some people thinking I was entitled the wrong way. My bad. ¯\_(?)_/¯

Brendan Schaub and the Hip Hop Gamer were our guests, and both were really fun to talk to…except for when Big Brown broke my big heart:

For me, the highlight of Barstool Radio was Dave getting TKO’d by this massive pen hit:

After we wrapped there, Frankie and Dave went to do pizza reviews, Caleb and Rone went to costume shop for a HILARIOUS video they have dropping today, and I went to the final Mayweather/McGregor press conference.

The presser itself was super boring and almost ceremonial, with only press and media allowed inside, not fans, and the fighters were NOT in the mood to get rowdy at all. I walked in with Floyd Mayweather Sr., actually, and tried to get a quick video of me talking some shit to him, but I got bodied by The Money Team. I did get this video of me wishing John Kavanagh and Owen Roddy good luck this weekend though!

Look at this kid, saying “we’ll” shock the world like he’s got anything to do with it. What a scrawny little fuck.

I met up with Caleb and Rone at the Luxor, which is where they’re staying, and boy is that a shithole! We did a bit of prep for an “Open Workout” video concept I was working on, and then hit the strip, where I unquestionably got a horrific sunburn. We settled on a spot and started causing mass havoc, and by that I mean we got a few weird looks. Caleb was playing my “Movement Coach” (ala Ido Portal) and Rone was my hype man, and I think we got some funny shit. Look for that this afternoon.

Dave took all of us to a real fancy Italian dinner after we all “finished” our work for the day, and I got thrown out of the lobby bar while waiting for our reservation because I didn’t order a drink. Seriously, the exchange went like this…

Our actual dinner was phenomenal. So good it almost made me a Go Pres Go guy. Didn’t FULLY pull me to the Dark Side, though, thank god.

…and that leads us to right now. It’s 4:01am Vegas time, I just finished editing my videos, and I’m talking to you fine folk about my day. It HAS been 23 hours since I last slept, however, and I have to be up in 3 hours, so I’m gonna have to cut it short right here.

Make sure to check out all of the videos we’re putting out today, there’s way more where they came from, and tune in to Barstool Radio on SiriusXM Rush 93 at noon east coast time. See you later!