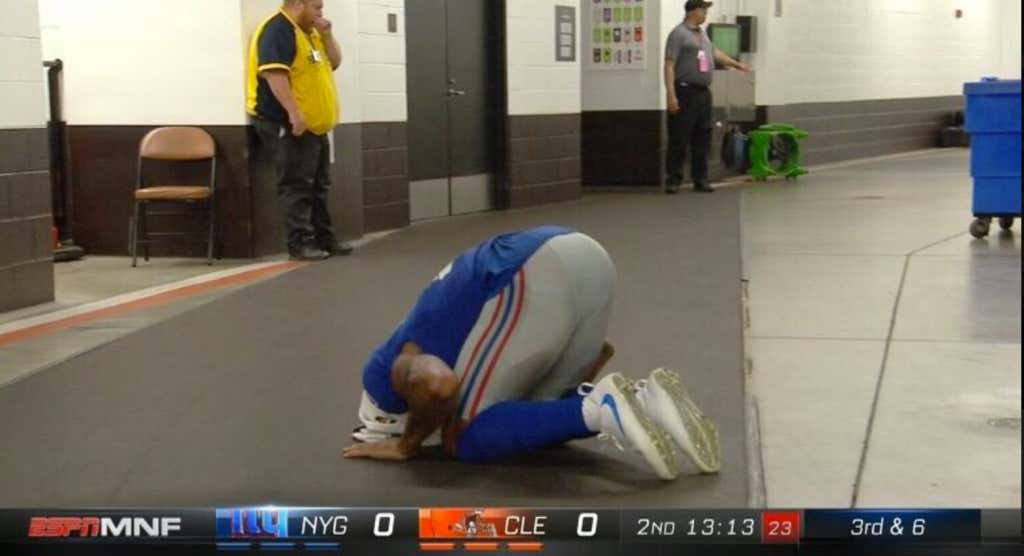 Fuck. The. Preseason. First Odell tries to blind himself during a meaningless eclipse this afternoon and then he has guys flying at his knees during a meaningless game (“and he didn’t even see it coming!” – All you hyenas out there). Based on the hit and the opponents jerseys, it reminded me of when Gronk had his knee blasted to kingdom come by TJ Ward, which obviously scared the shit out of me. I also remember when Odell faced a Gregg Williams defense in St. Louis and they were taking cheap shots at him all day long like there was a fucking bounty on his beautiful blonde head. I’m not saying that’s the case here but I am saying fuck Gregg Williams anyway.

On the bright side, the Giants Twitter account said it was an ankle injury and he cleared the concussion protocol.

Oh great, that was just the scariest preseason ankle injury of all-time huh? Guess I’ll just put this cyanide pill back in the container and hopefully never see it again. And since the team doctor was apparently offering 2-for-1 specials, B-Marsh got his shoulder checked out.

Now we obviously don’t know the extent of Odell’s ankle injury. Hopefully it’s just a reminder that he should be placed in bubble wrap until the Cowboys game. And I know I shouldn’t be petrified of the phrase “further examination”. But I’m also a Mets fan, so the phrase “further examination” petrifies me. So in the meantime I am just going to do the only thing I know how to do, which is spin my spinners like some fat white witch doctor and pray for good news. Hey, it worked for Sterling Shepard.

So only two coronaries for #GiantsTwitter so far this preseason. Three if you count when we thought Odell’s eyes melted this afternoon. I need an Odell dance video to drop ASAP. Partially so I know his knee is healthy, partially because I need that happiness back in my life after that hit almost made me cry.

And now your Moment of Ben (because we need some good juju).