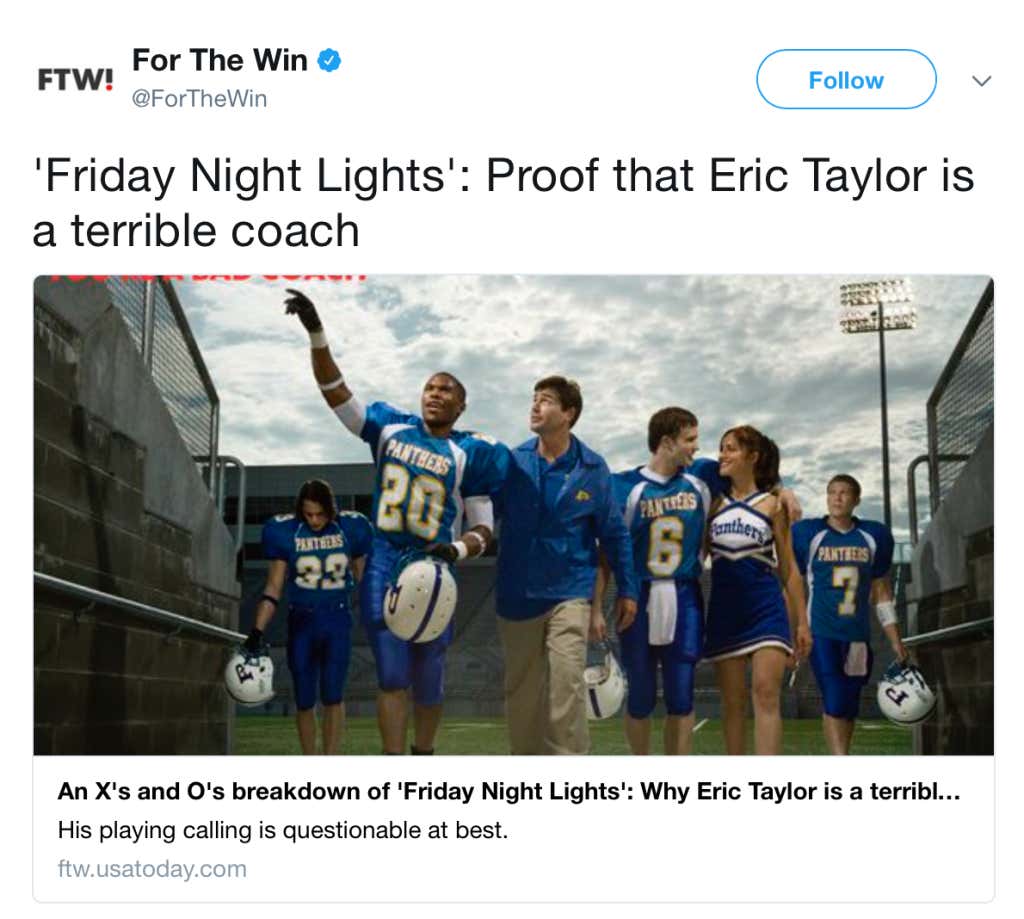 Talk about your all time Friday news dump! Got something shitty and wrong to say, everyone knows that a Friday from June to August is the best time for it. But I won’t let this stand. Call me a hero if you must, but my moral compass won’t allow this drivel to be spewed. I’ve long thought it silly to respond to stupid articles from lowly websites, as you wouldn’t give a megaphone to a homeless man shouting conspiracy theories on the street corner, but every man has a line and For The Win just crossed mine. You will not disrespect Coach Taylor. Not while I’ve still got air in my lungs and access to Coach Taylor YouTubes to fire me up.

The article in question is beyond stupid. It blames Taylor for calling a shotgun play and his quarterback lining up under center (that seems to be a QB misstep imho), for giving Smash Williams preferential treatment by allowing him to have Smash on his locker nameplate (the best running back in the state of Texas getting a little extra? Why, I never!), and a few instances of questionable play calling. We’re going to say Eric Taylor is a bad coach because of a handful of calls that don’t look great in hindsight? Eric Taylor, the guy who went 48-16 with 4 playoff appearances and two Texas state championship rings? You know, Bill Belichick went for it on 4th and 2 and that didn’t work out, I still think he’s a pretty damn good football coach.

You know what? Let’s even ignore the record, which is *beyond* reproach, because high school football, even in West Texas, is about more than just wins and losses. It’s about being a leader and molder of men. Coach Taylor took countless people and saved them from lives of redneck misery. Without Coach Taylor saying to Matt Saracen that he should get his own daughter in the back of a car, Saracen probably dies a virgin. Without Coach Taylor Saracen never gets over everybody leaving him and never gets the confidence to move to Chicago. No Coach? Tim Riggins is a drunk who doesn’t care about anything in the world, with him he’s a college student (for a hot minute), a family man, and a fucking hero. Smash Williams would be working at the Alamo Freeze for the rest of his life. Buddy Garrity would still be crying into a bottle of liquor because he cheated on his wife. Joe McCoy would still be smacking around his son. Landry Clarke wouldn’t be named Lance. Vince Howard would have never gotten out of the hood. He changed countless lives.

Eric Taylor is the greatest high school football coach who has ever existed, by any measure. Check the wins and losses columns, check the lives he altered, check the speeches he gave, check it all. There is no equal for Eric Taylor and there never will be. Don’t disrespect him, not on my internet.