In one of the worst beanings in baseball history, Boston Red Sox star Tony Conigliaro is struck in the face by a fastball from Jack Hamilton of the California Angels in the fourth inning of a game at Fenway Park. Conigliaro sustained severe damage to his to his left retina, along with a fractured cheek bone and a dislocated jaw. Tony Conigliaro would miss the remained of the season and all of 1968 as his career was never the same.

Tony Conigliaro was born to play for the Boston Red Sox on January 7, 1945, in nearby Revere, Massachusetts. After playing high school in Lynn, Conigliaro signed with the Red Sox in 1962. He made his debut just two years later and became Boston’s teenage sensation. For fans that had little to cheer for in Boston, Tony Conigliaro became an instant fan favorite, as he hit .290 with 24 home runs and 52 RBI in 111 games before an injury shortened his season. The 24 home runs at the age of 19, remains the most ever for a teenager in Major League Baseball. Adding to his charm, for Red Sox fans, Tony Conigliaro, blessed with matinee idol looks, was a singer in the off-season releasing several records. The following Conigliaro, became the youngest player in American League history to lead the league in home runs, hitting 32, while collecting 82 RBI and batting .269.

Tony Conigliaro continued to put up consistent numbers, through 1966, with another 28 home runs. In 1967, he was an All-Star for the first time, as he became the youngest player in the history of American League to hit 100 home runs in his career. Hitting .287, with 20 home runs and 67 RBI for a Red Sox team in a pennant race. Batting sixth as the Red Sox in a tight four team pennant race, Tony Conigliaro got a single in his first at bat in the second inning against the California Angels. In his second at bat two innings later Conigliaro is struck in the face by a pitch from Jack Hamilton who had a reputation of throwing a spit ball. As the Fenway faithful held its breath Conigliaro was carried off on a stretcher. The ball that struck Tony C. did a lot of damage, a fractured cheek bone, a dislocated jaw and a damaged retina. Had doctors, saying he would never play baseball again. Conigliaro missed the remainder of the 1967 season, as the Red Sox completed the Impossible Dream and reached the World Series, where they would lose a heartbreak seven game battle with the St. Louis Cardinals. 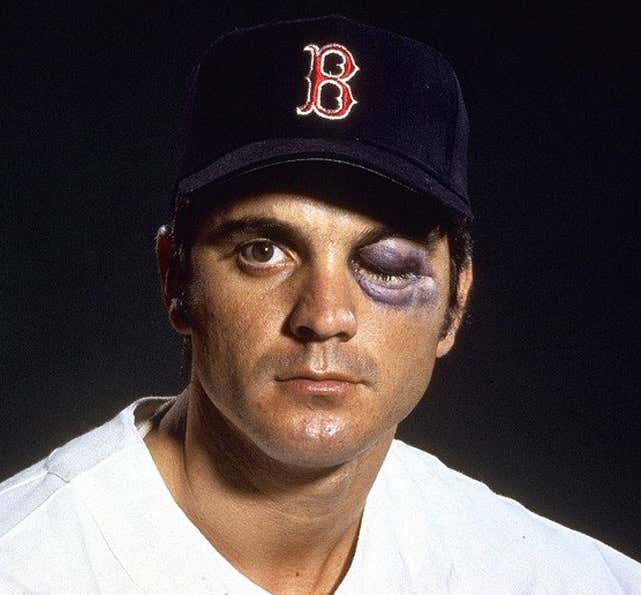 After missing the entire 1968 season, Tony Conigliaro returned to the Red Sox lineup in 1969 and won Comeback Player of the Year by hitting .255 with 20 home runs and 82 RBI. The following season Conigliaro had a career high 36 home runs and 111 RBI while batting .266 as he was joined in the Boston outfield by his brother Billy. Despite his successful seasons, the Red Sox traded Tony Conigliaro to the Angels in a multiplayer deal. Playing with the Angels in 1971, Tony C. vision began to deteriorate. Limited to 74 games, Conigliaro struggled in California hitting .222 with four home runs with 15 RBI. Following the season Tony Conigliaro would retire.

In 1975, Tony Conigliaro attempted a comeback with the Red Sox, but it was clear he was not able to see the ball clearly. Limited to just 21 games he hit .123 hitting two home runs with nine RBI. The final numbers left generations of fans wondering what might have been, as Tony Conigliaro finished his career with a .264 batting average with 166 home runs and 516 RBI.

After retiring, Tony Conigliaro became a local sportscaster in New England, working a Channel 10, WJAR in Providence, Rhode Island. He later moved on to San Francisco working Channel 7, KGO. Looking to return to Boston, Tony Conigliaro was preparing to interview for a job at a Boston television station in 1982 when he suffered a stroke on January 9th, just two days after his 37th birthday. Some attributed the stroke to lasting damage from the Jack Hamilton beaning. Tony Conigliaro was left in a vegetative state after the stroke until his death eight years later. Tony Conigliaro would be inducted into the Boston Red Sox Hall of Fame, as the team named an award in his honor given to the player that overcomes obstacles through spirit and determination.